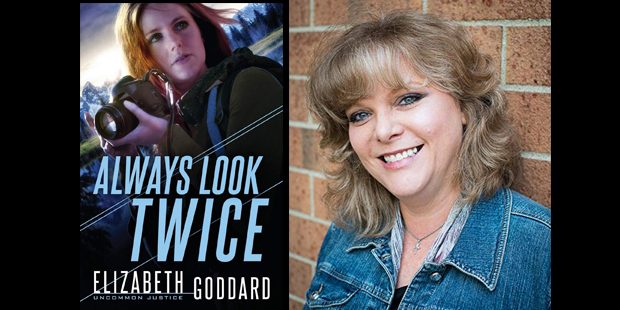 Always Look Twice by Elizabeth Goddard is the second in the series about the McKade brothers. This action packed romantic suspense delves into family, friendships, second chances, and personal growth, with many twists and turns.

The plot begins with Harper Reynolds who is attempting to heal her mind and soul by photographing nature scenes instead of crime scenes. Unfortunately for her as she is taking telephoto pictures of a Grizzly Bear, she inadvertently captures a murder being committed in Jackson Hole, Wyoming.

“I wrote the Grizzly Bear scene from a personal experience as I was researching for this book in Yellowstone. A Grizzly Bear came out, while the rangers were pushing people back to keep everyone safe. As with Harper, the bear was pretty far away, but with a telephoto lens he was brought closer.”

The hero, Heath McKade, is the owner of Emerald M Guest Ranch, where guests can hike, camp, ride horses and many other outdoor activities, and a reserve deputy in an understaffed county. While on the ranch, he hears a gunshot and then a scream and decides to investigate. He finds a woman who had fallen on the trail, an old childhood friend, Harper, whose family moved away after the murder of her father. Because of the possible murder he has been assigned to protect the only witness, Harper. She convinces Heath that they must work together to find justice and the killer.

Goddard wrote Heath as “someone who is the older brother type.  A protector, loyal, trustworthy, and noble. Harper was written as a troubled soul who has survivor’s guilt with PTSD.”

The setting is a secondary character in the story. Goddard noted, “The setting inspires me. Most of my stories are set in the Pacific Northwest, though not all. I loved the Oregon coast, the redwoods, and Crater Lake, so I’ve set many stories in those locations, and a few series in Washington. Also, the other books in my “Uncommon Justice” series are set in Jackson Hole, Wyoming, another place I’ve loved. An upcoming series, “Rocky Mountain Courage,” is set in the Rockies. I have just moved to Washington state, so I’ll be near the locations I love to write about the most. In eastern Washington, I’ll be close to the Rockies and of course, a few hours from coastal Washington. I think I’ll be in novel writing heaven then.”

People are also able to get a glimpse of nature. “In my stories, I love to show how nature connects with the beautiful wilderness.  I quoted John Muir because he is the person who helped to create natural parks. He is one of the first to point out the beauty of nature.”

Goddard writes action-packed novels with very likeable characters.  The mystery has so many twists and turns that readers are kept guessing.