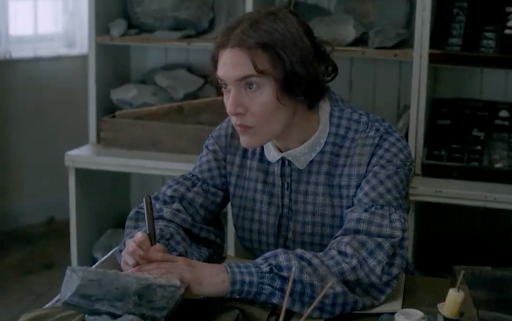 Coming to theatres and On Demand from writer/director Francis Lee and Neon is a story of two women in search of something more than AMMONITE.

Mary Anning (Kate Winslet) is a renown fossil hunter who spends her days on the shores of Lyme Regis in 1840 England. Day after day the self-taught paleontologist has an amazing eye for finding fossils that she sells to tourists. Taking care of her ailing mother Molly (Gemma Jones), Mary keeps to herself.

One day, at her shop door is Roderick Murchison (James McArdle) looking to learn about how Mary finds fossils. Along with him on the visit is his wife Charlotte Murchison (Saoirse Ronan) who is quiet and meek. A few days pass when Murchison offers Mary a large amount of money to watch over the depressive Charlotte while he goes on his next adventure.

Knowing the money would help, she begrudgingly agrees. Almost right away Charlotte becomes seriously ill and as she starts to get well, she and Mary start to show signs of friendship toward each other. Both have pasts that are haunting their ability to be happy with thin veils of uncomfortableness that wakes up with them each and every day.

What comes from that friendship is complicated, loving and forces life choices that are painful for them both but needed to break free.

Winslet as Mary is a woman set in her ways. Taking care of an ailing mother, Mary, in a way, hides behind her as I see it. Diving into her work finding fossils is another way to avoid people totally. Making sure they have enough money to survive is important, but the years have created a bubble around Mary’s life. I actually love when Winslet takes on roles that are a challenge to understand and grasp as the tale unfolds.

Ronan as Charlotte has a depression she is fighting through and does not see any light in her life. Even with Mary, the first days she remains aloof and dangerously closed off. Ronan is always a light on the screen and following her career is a joy. With every role she chooses there is simplicity mixed with complexity that is all wrapped up on her face that does not give anything away until she is ready for us to know – and then only in doses.

Jones as mother Molly has become use to living the secluded life her daughter provides and sees Charlotte as an interloper. Shaw makes herself known as Elizabeth Philpot who has a connection to Mary that is endearing and telling.

McArdle as Murchison is a husband who says openly that he wants his wife back but does not seem to be heart broken over leaving her with Mary. Do not think we didn’t notice that Murchison!

Other cast include Claire Rushbrook as Eleanor Butters, Alec Secareanu as Dr. Lieberson and Fiona Shaw as Elizabeth Philpot.

Neon is a film production company that is best known for such films as I, TONYA and one of the most incredible Oscar winning film PARASITE. With a total of 12 Academy Award nominations, Neon appeals to audiences that are looking for in-your-face storytelling. For more information please visit www.neonrated.com.

Director Lee says, “I wanted to explore what this relationship might mean to someone who has not only been socially and geographically isolated but who has had to close off to any emotional life, where you replace affection and intimacy with work and duty. Where you have been overlooked and ignored your whole life because of your gender and social class. Given this world, would Mary be able to access how she feels for Charlotte? Would she be able to let her guard down to allow the possibility of something new and wonderful to enter her life?”

When asked about the importance to telling Mary’s story, Winslet says, “She is so important. Her strength, her courage – I admire those qualities very much, but also her vulnerability, which she had to keep hidden. Now more than ever we’re living in a time when women are absolutely obsessed with other women and when, more than what we look like or how we feel when we walk down the street, it’s about what women have to say. Women are greater together; the stronger female voices we have, the more togetherness we show.

When asked what she wanted audiences to take away from seeing AMMONITE, Saoirse Ronan says, “Everyone’s going to take away something different from it, which is always wonderful, when you have people coming up to you saying “I really got this bit” or “I felt like that was me…”. You’re watching two people really discover themselves as individuals and within a partnership, and I think that’s a really beautiful thing to watch and it doesn’t necessarily come easy.”

The film has a quiet character which is the shoreline itself with its secrets waiting for Mary to discover but also a gray and cold feel. You could say that both women can sit before the waves and feel a kinship with the waves showing outside what they feel inside.

AMMONITE is a simple tale with a not-so-simple story that pushes hard to be told. Winslet and Ronan carry the entire film and bring out the characters fears, hopes and desires is so well done. This might be the story of two women but know it is also the story of two people who are learned to break through the closed off life they had come to know.

In the end – it is simply love.