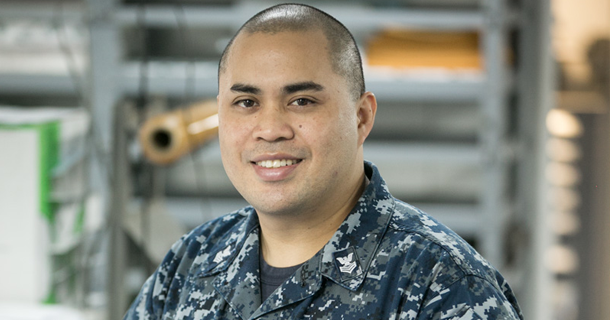 Petty Officer 1st Class Archibald Alamares is a yeoman aboard the aircraft carrier operating out of Yokosuka, Japan.

Petty Officer 1st Class Archibald Alamares is a yeoman aboard the aircraft carrier operating out of Yokosuka, Japan. While out at sea, the ship visits numerous countries each year such as the Philippines, Hong Kong, Singapore and Thailand.

George Washington is one of only 10 currently operational aircraft carriers in the U.S. Navy. It is the sixth Nimitz-class carrier and the fourth Navy vessel named after the first president of the United States. Measuring nearly 1,100 feet from bow to stern on the flight deck, the ship is longer than three football fields. It is 257 feet wide, 244 feet high and weighs nearly 100,000 tons.

As a sailor with numerous responsibilities, Alamares said he is proud to serve his country aboard an aircraft carrier in Japan.

“I like being aboard a forward deployed ship that goes on deployment every year,” said Alamares.

Alamares also said he is proud of the work he is doing as part of the Washington’s 3,300-member crew, living thousands of miles from home, and protecting America on the world’s oceans.

“I provide administrative and clerical services for the ship,” Alamares explained.

Assigned to the Navy’s Seventh Fleet, George Washington sailors are continuously on watch throughout the Indo-Asia-Pacific region, acting as one of America’s first responders in the Navy’s largest area of responsibility.

Sailors’ jobs are highly varied aboard George Washington. The ship’s company, which keeps all parts of the aircraft carrier running smoothly, including everything from launching and recovering aircraft to operating its nuclear propulsion plant. Another 2,000 Sailors are assigned to the ship’s embarked air wing, Carrier Air Wing Five, flying and maintaining aircraft aboard the ship.

“I never cease to be impressed with the type and quality of work that goes on aboard the carrier each day,” said Capt. Timothy Kuehhas, the carrier’s commanding officer. “Our team is filled with highly qualified young adults – in many cases, 19 and 20 years old – and they’re out here launching and recovering aircraft, running a complex propulsion system safely, serving as air traffic controllers, operating sophisticated electronics, and keeping this floating city alive and functioning. Collectively, they are part of the greatest ship in our Navy. They are proud of their ship and proud of what they do for the United States Navy and their country. If you pick up a newspaper in any city and examine what other 19- and 20-year-olds are doing, there is no comparison to the level of responsibility our Sailors hold.”

George Washington is also a self-sustaining, mobile airport and, like each of the Navy’s aircraft carriers, is designed for a 50-year service life. While underway, the ship carries more than 70 jets, helicopters and other aircraft, all of which take off from and land on the carrier’s 4.5-acre flight deck. Four powerful catapults launch aircraft off the bow of the ship. After lowering a tail hook that protrudes from the rear of the aircraft, jets and aircraft land by snagging a steel cable called an arresting wire.

Alamares and other George Washington sailors know they are part of a forward-deployed team that is heavily relied upon to help protect and defend America across the world’s oceans.

“The Navy provides great financial stability for my family and gives me the opportunity to travel,” said Alamares.