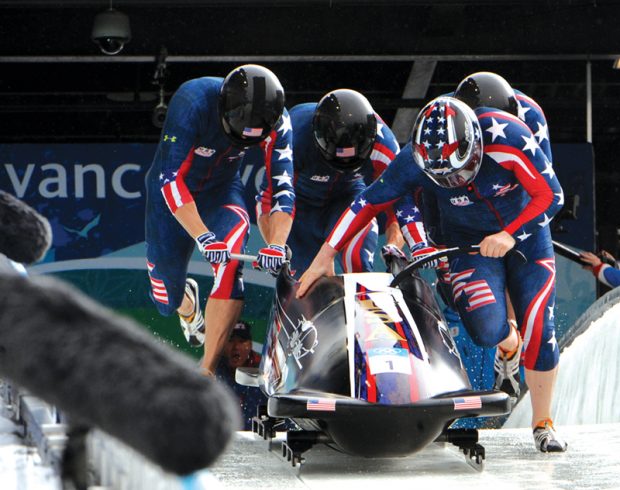 FORT MEADE, Md. — Heading into the 2018 Olympic Winter Games in PyeongChang, South Korea, the U.S. bobsled team members didn’t plan to take anything for granted. The U.S. men know one slip-up could send any four-man or two-man squad tumbling in the field.

Thankfully, however, three of four Army bobsled athletes that qualified for the games boast prior Olympic experience, which should boost their chances of medal-winning performances during the games.

Cunningham, Olsen and Fogt are members of the Army’s World Class Athlete program and train full time for their sport. Weber, who is not in the WCAP, splits his time between training with the bobsled team at their home base in Lake Placid, and training with his Army unit for combat operations.

Despite their familiarity with the Games, these WCAP members know how fast fortune can change. Just ask Fogt.

Considered one of the fastest athletes in the men’s program, Fogt helped put his team in medal contention after placing in the top six during competition at the 2010 Vancouver games. However, a fall on the track sent Fogt’s squad out of medal contention. Fogt rebounded to win bronze in the 2014 Sochi Games. The military intelligence officer initially left the bobsled program after the 2014 games, but after learning his pending deployment was cancelled, he rejoined the squad shortly after.

Team USA assistant Mike Kohn, a captain in the National Guard, hopes Fogt can build on his success from the Sochi games. Fogt will be participating in his third Olympic games, and has moved to left-side pusher on the USA’s No. 2 sled team after having served as a brakeman.

“It’s nice having that veteran athlete on the team to help the younger guys find their way,” Kohn said. “He’s a solid guy you can count on to come through when it counts. Chris is a fierce competitor. He’s been with us now for over 10 years and we’re glad to have him for one more Olympics.”

Cunningham is back on the team after a surgery to repair torn muscles in his groin and stomach that left him unable to participate on the World Cup squad in 2016.

“That was devastating to me,” Cunningham said. “That was kind of the low point of my entire athletic career, not just bobsled career. And to be able to battle back and earn a World Championship berth was the icing on the cake.”

Cunningham worked his way up to the World Cup team by competing on the North American Cup tour, and his journey culminates with a trip to South Korea. The New York National Guard member will compete on both a four-man and two-man bobsled team in PyeongChang.

“It’s a testament to him not giving up and continuing to fight through,” Kohn said.

Dedication to a fallen superstar

Since the tragic death of bobsled star Steven Holcomb last May, the team has dedicated the 2017-2018 World Cup season to his memory. The squad also decided to dedicate the 2018 Games to the longtime U.S. competitor and former WCAP athlete.

Kohn said that as a kind of remembrance of Holcomb, the team on occasion wears Superman symbol patches with Holcomb’s initials on them, along with team shirts and hats.

The most decorated bobsledder in U.S. history, Holcomb had a lasting impact on the men’s program. He competed for the U.S. team from 1998 until his death in May 2017. During that time he won a gold medal in the four-man bobsled, which was the first gold for Team USA in that event in more than 60 years.

In all, Holcomb earned two gold medals, three silvers and one bronze during his 19-year career and served as a mentor to younger members of the squad.

Holcomb competed alongside Kohn, as well as several members still on the current team. And Kohn, who still keeps in touch with Holcomb’s family, said the loss has been tough for everybody who worked with the star athlete.

“That’s been the hardest thing for us to deal with this year,” Kohn said. “He’s probably the best bobsledder we’ve ever had. (It) is still a challenging thing to get over right now. The whole team is kind of fighting through that. It’s a tough road but you keep moving forward the best that you can.

“It’s been really hard on the athletes because they were so close to him,” Kohn said.

One athlete in particular, Olsen, was a member on Holcomb’s 2010 gold-winning team.

Olsen, also a New York National Guard Soldier, served as a pusher with Cunningham’s team in 2014. The 30-year old will compete as a driver for the first time as Team USA’s coaches shuffled the lineup to find the best team combinations for the Games. But these will be Olsen’s third Olympic Games. Olsen is a construction and masonry Soldier from San Antonio, Tex.

“Sgt. Olsen is arguably our best pusher, he’s a driver but still one of our best pushing athletes,” Kohn said. “Sgt. Olsen is our hope for the future as far as driving goes. He’s really put in the time and is focused and committed.”

Kohn said Olsen will once again contend for medals in the four-man and two-man events. The Soldier finished in second place during the two-man test event in South Korea last March.

After joining the USA men’s program in 2011, Sgt. First Class Nate Weber, a Green Beret in the Army, will finally get to participate in his first Olympic games. Weber is a native of Pueblo West, Colorado.

“The Olympics is the 50 meter target,” Weber said last summer. “That’s what I’m focused on right now. After that, it’s kind of up in the air as to what I do (after the Olympics). I love being a Green Beret. I love being a Soldier. But at the same time, I love the world of bobsled. I love to compete; I love to be on that international stage.”

For Kohn, he said he is honored to coach the Army’s bobsled athletes as well as serving alongside them. He said despite the Soldiers’ additional duties and training, they have managed to remain committed to training and continually pushing themselves.

The athletes, Kohn said, have had to deal with frequent changes as USA coaches have shuffled lineups in advance of the Olympics next month. In another change, Weber and his sled teammates began working with a new sled this week.

“Most of our athletes are very dedicated,” Kohn said. “That’s what’s great about this group of athletes; they all find a way to train hard and commit themselves … They make the best of any situation whether they’re deployed or not, they keep training and working hard. And it’s an honor to be their coach.”