Bolts travel to New England for biggest test this season 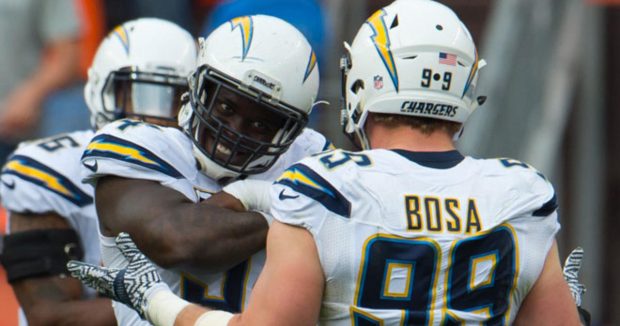 The Los Angeles Chargers (3-4) are set to face the defending Super Bowl Champion New England Patriots (5-2) this weekend on the road for the first time since 2011.

Currently riding a three-game win streak and playing their best football this season, if the Chargers can pull off the upset over the Patriots they can bring their record to .500 after starting the season 0-4.

The key to this game circles around five-time Super Bowl Champion quarterback Tom Brady. For the Patriots, keeping Brady — a four-time Super Bowl MVP — upright and away from the Chargers ferocious pass rush will be priority No. 1. Through seven games this year, Brady has already been sacked 15 times as opposed the 13 sacks he suffered throughout the entire 2016 season.

As for the Chargers, the test will be how successful Joey Bosa and Melvin Ingram can be at knocking Brady off-kilter and disrupting his timing in the pocket. Whether it be by hits, constant pressure or sacks, the Chargers must get to Brady if they have any hope for a victory.

“He plays really hard,” Belichick told reporters. “Every play he’s all out. He makes plays from the backside, chase. [He’s an] outstanding pass rusher. He’s got good strength but he’s got good quickness and he knows how to use both of them. If you are over-aggressive on him, he’s quick enough to get by you. If you sit back, then he is explosive enough to power the blockers into the quarterback or into the backfield.

“He’s a very disruptive player. He’s got a lot of length so he gets to a lot of plays, tackles, tipped balls, can reach out and get the quarterback. He’s a hard guy to throw around or over. He’s really just good at everything but he’s got a great motor so you’ve got to deal with him every play. You can’t run away from him; that’s not the answer, because he’ll chase down plays. Running at him is not the answer either because that’s a problem, too, so to say, ‘Well, let’s just run away from him,’ well, A, you’re running into [Melvin] Ingram and, B, these guys, Ingram and Bosa, will both make plays from the backside. They’re good. They’re really good.”

The Endzone: To earn a win over the Patriots, the Chargers must be successful in all three phases of the game as they were in their win over the Broncos. Per ESPN’s Eric D. Williams, on offense the Chargers finished the game with just 242 total yards, the fewest since 2012 (according to ESPN Stats & Information), and the offense had no turnovers against the Broncos (just the 2nd time this season).

Defensively, the Chargers had five sacks on Broncos quarterback Trevor Siemian, forced three fumbles and held the Broncos to 251 total yards. On special teams, Travis Benjamin returned a 65-yard punt for a score (the first punt return for a score since 2012) and the Chargers won the battle of field position as punter Drew Kaser averaged 51.6 yards a punt, with three downed inside the 20-yard line (one of which was a 69-yarder downed at the 1-yard line).

Final Analysis — unlike the Chargers, the Patriots are a team that does not beat themselves. If the Chargers continue bad clock management, wasted time-outs and settle for field goals rather than touchdowns, it will be a long day at Gillette Field and a longer flight home. However, if the Chargers can harass Brady via hits, pressure and sacks; exploit favorable matchups (Chargers’ running backs vs Patriots’ linebacker’s in open space/ have Bosa & Ingram exploit LT Nate Solder); win the battle of turnovers, field position and clock management (keep Brady off the field), then the Chargers could enter their bye week 4-4.