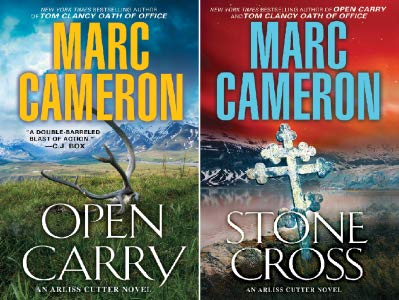 Arliss Cutter is the main character in a new series by Marc Cameron who has spent 29 years in law enforcement. In early 1991, he accepted a position with the US Marshals Service where he moved through the ranks to finally retire as chief of the District of Alaska. With his vast experience, Cameron is able to create realistic stories, characters, and descriptive settings.

The author explains how his past experience helped him write these stories. “I worked for the US Marshals where my assignments spanned protective details of Supreme Court justices and foreign dignitaries, Witness Protection details, and boots-on-the-ground law enforcement in the aftermath of hurricanes like Andrew or Katrina. Twenty years ago, I was on a tactical tracking unit in Alaska.  This was the first time I was in Alaska.  I knew then that it would make a great setting for a book.”

“In all my books in the series, Alaska will be a main character.  There are so many places to write about including the Southeast, western interior, the arctic tundra, the cities, and the rainforest.  In the first book, Bush Alaska is the setting with endless miles of tundra, herds of caribou, salmon-choked rivers, and some really big bears. I felt like I’d been dropped into the pages of a National Geographic magazine. We’ve lived here 20 years now, and I still feel that way. In the second book, Stone Cross, I wanted to show the culture, the dog-sledding, fights, sexual assaults, and the tattoos. It is called the Last Frontier because people who want to make a new life come here as well as those who want to hide form their former life.  Fugitives are fairly common because they come here to hide.”

The main character, somewhat based on Cameron, has a strong sense of doing the right thing in the name of justice. He deals with bullies in a swift, uncompromising manner, and is not afraid to put his life on the line to protect and defend the innocent. Able to exude competence, he is smart, experienced, capable, and now is part of the elite Fugitive Task Force. After enlisting in the military, fighting in the Middle East, and working three field positions for the Marshal Service, Cutter requests a transfer to Alaska to be closer to his late brother’s wife and children.

“I wrote Arliss Cutter as a Gary Cooper type of hero: quiet, an observer, inquisitive, and hard-nosed. He wants to help others, strong, courageous, protective, someone who loves his family.  He rarely smiles so it seems like he has a bad temper, but that’s not it at all.  He’s a big, imposing guy who will suffer virtually any insult against himself personally, but he will not allow another to be bullied. There is a line he will not allow others to cross, no matter the consequences. He’s the type to put himself in the middle of a confrontation. He has built barriers and is troubled, trying to redeem a wrong action, even though he was not in the wrong.”

The first book in the series, Open Carry, introduces very intriguing secondary characters.  Cutter’s partner, Deputy Lola Fontaine, is gutsy and a good contrast to Arliss.  His grandfather, Grumpy, raised Cutter and his brother, teaching him rules of life that are now being passed on to the nephews he is helping to raise.  There are two strong women in Cutter’s life, Chief Jill Phillips and his sister-in-law Mim.

Open Carry has Cutter and Fontaine trying to find three people who have disappeared on the Prince of Wales Island in Alaska. Two are crew members of a reality TV show. The other is a Tlingit Indian girl who had the misfortune of witnessing the drug cartels horrific acts. Cutter’s job is to find them, and track down those responsible.

Stone Cross, the next in the series, has Supervisory Deputy U.S. Marshal Arliss Cutter and his partner, Lola Teariki, reluctantly escorting a federal judge, who has received a death threat, to the rural village of Stone Cross. Their assignment is to protect him. But it takes a chilling turn, when they learn that a local couple have gone missing and their handyman murdered. Cut off from any immediate help due to inclement weather, Cutter and Lola must brave freezing snow and ice to go after a killer and probable kidnapper.

The author brings the Alaskan setting to life with the freezing storms, deep water, and dark, old-growth forests. The characters are multi-dimensional, quirky, and have traits that make readers care about them.