Countdown to the draft — Quarterbacks 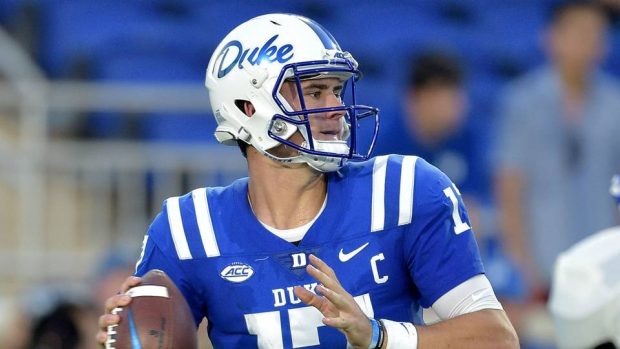 In this issue, we focus on a few quarterbacks some pundits believe the Chargers could select in the first round or later in the draft. With Philip Rivers expected to sign a contract extension before the start of the season, many analysts believe this is the year the Chargers finally draft Rivers’ eventual replacement.

Below is a look at the quarterbacks, a short quote by the analysts and an overall analysis of each player from the staff AthlonSports.

Daniel Jones, QB, Duke. Ranked No. 4 by AthlonSports.com, the 6-foot-5-inch, 220-pound Jones is former Redskins and Texans GM Charlie Casserly’s choice for the Chargers first round pick in his latest mock draft. Said Casserly, “The Chargers find Philip Rivers’ heir by selecting the most pro-ready quarterback prospect in the 2019 draft class.”

Strong points: Jones has all the physical traits, as well as the pedigree of working under Dave Cutcliffe, who developed both the Manning brothers in college. Physically, he has plus arm strength, with the pure arm talent to make strong throws from various platforms. He also shows the toughness to stand in and absorb hits while getting the ball out. Duke used a lot of quick game, and Jones is very good with ball placement and tough at the shorter levels. He also does a nice job of putting air under the ball on deep throws, allowing his receivers to get under them. He’s capable of extending plays and creating late in the down, both with his arm or taking off in the run game. He’ll be able to serve as a big part of an NFL team’s run game right off the bat, a weapon in the read-option and deadly on RPOs.

Weak points: Things get a little dicey for Jones if his first read is taken away. He can get sluggish with his footwork, and his accuracy suffers as he goes deeper into his progressions, as he doesn’t seem to see the field particularly well and too often won’t test available windows at the intermediate and deep-intermediate levels. A lot of his statistical production  came from run-after-catch yards. He’s still something of a work in progress, and having last season interrupted by a broken collar bone didn’t help.

Summary: Jones is like a bigger version of Micthell Trubisky. His natural gifts will allow him to make an immediate impact if a team wants him to start early, but it will take a good tutor to get him comfortable enough to run a fully formed passing game.

Will Grier, QB, West Virginia. Ranked No. 5 by AthlonSports, the 6-foot-1-inch, 210-pound Grier is Peter Schrager’s (Good Morning Football Host) choice for the Chargers first round pick in his first mock. “Teams seem to be a lot higher on Grier than folks in the mock draft world. Los Angeles could take Grier here, and get him for four years with a fifth-year option in his contract. No one is pushing Philip Rivers out the door any time soon, but having Grier — who I believe will see his stock rise the most of any QB at the combine — waiting in the wings would be wise.”

Strong points: Thanks to Baker Mayfield, the knocks against Grier don’t ring quite as loud. He has the requisite arm strength, quick feet and twitchy overall athleticism to make plays inside or outside the pocket. He’s an accurate thrower on the move and looks comfortable mapping the field when flushed from the pocket. He’s enough of a threat with his legs to be occasionally in the read-option game.

Weak points: Grier’s measurables limit his ceiling, especially because he doesn’t quite have the accuracy, decisiveness or processing of Mayfield. He’s on the small side, and his natural delivery is closer to three-quarters rather than over-the-top, which should lead to a lot of batted-down passes. Grier struggled — both his pocket presence and his mechanics — when ford to move deeper into his progressions. Arm strength is middling at best.

Summary: A poor man’s Mayfield, Grier has the kind of twitchy athleticism and improvisational ability that new-age offenses covet. He profiles as a fringe starter but could be certainly propped by a creative system.

Ryan Finley, QB, N.C. State. Ranked No. 7 by AthlonSports, the 6-foot-4-inch, 210-pound Finley is Vinnie Iyre’s (The Sporting News) choice for the Chargers first round pick in his mock dated April 1. Said Irye, “The last time the Chargers got a Wolfpack QB on draft day 15 years ago, he was Philip Rivers. Now they find Rivers’ successor by tapping into the prospect who played so well in college that part of the stadium was already named after him.”

Strong points: Finley passes the measurable test — tall enough to survey the field from the pocket, with enough to power the ball downfield. He’s a god athlete, capable of making the occasional play with his legs and usable in the zone-read game. He has a quick, compact release and moves quietly in the pocket. He does a nice job with ball placement at the short level and shows excellent touch and placement on the deep ball. He’ll stare down the gun barrel and absorb contact as he throws. He’s very good recognizing opportunities in the pre-snap phase.

Weak points: Finley’s arm talent is fringy — he can make all the throws when his feet are set but loses zip when forced off his spot or unable to step into his throw. Most of his best throws come when he can determine his read before the snap. He struggles when forced to move deeper into his progressions.

Summery: Finley has a future — it’s just a matter of whether he can be a low-lever starter or will settle in as a career backup.

The Endzone: Pro Football Focus’ Luke Easterling had the Chargers selecting quarterback Tyree Jackson in the third round of his latest 7-round mock draft. Ranked No. 9 by Athon Sports, the 6-foot-7-inch, 245-pound Jackson is a redshirt junior entering the draft a year early.

Strong points: Jackson is a super-sized pocket passer with one of the best pure arms in this draft class. He throws with excellent velocity at the intermediate and deep-intermediate levels, fitting passes in before the window can close. When he has his feet set, he can make the far — hash throw on a rope. He occasionally flashes the ability to subtly move within the pocket, re-set his feet and liver an accurate throw. He has the ability to shred off pass rushers and extend the play.

Weak points: He’s a slow mover and slow processor. Hs footwork is sluggish and leads to erratic accuracy — he tries a lot of tough throws, but he also missed too many layups. His velocity is offset to a degree by his windup, giving defenders a chance to close down those throwing windows. Because of his height, he’s not a very coordinated mover— his touch and accuracy suffer when he’s flushed out of the pocket. Generally, he’s slow to get through his progressions and will linger on bad reads too long.

Summary: He’ll appeal as a development prospect for a team that relies on a run-based offense and deep play-action passes.