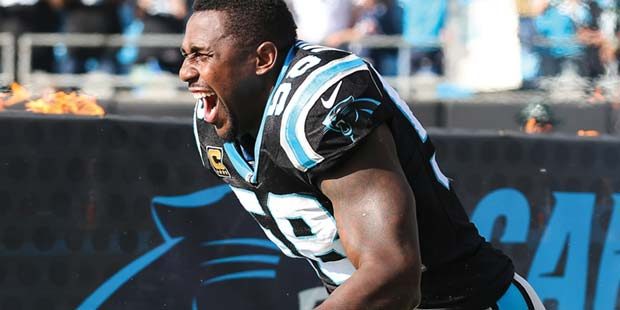 With a number of players’ contracts expiring during the next two years and limited cap space available, the Chargers have re-signed five of its own free agents during the first week of free agency, as well as veterans Thomas Davis and Tyrod Taylor.

Having advanced to the divisional round of the playoffs last season, retaining in-house players will be key to stabilizing the continuity of the roster that gelled so well together en route to a second place finish in the AFC West with a 12-4 record and the team’s first return to the postseason since 2013.

However, with the release of Jahleel Addae, the team appears to have an opening at free safety. Do the Chargers stand pat and let Adrian Phillips and Desmond King compete to fill the void or does General Manager Tom Telesco opt to sign a veteran safety with more experience to man the secondary?

Despite their limited action in free agency thus far, Touchdown Wire recently listed the Chargers  No. 4 in its latest NFL  power rankings.

Per Gavino Borquez (ChargersWire), “The loss of wide receiver Tyrell Williams stings a bit, but he wasn’t the offense’s top option. The addition of linebacker Thomas Davis is a nice pickup to help lead their young core on defense.

“The Chargers re-signed a few of their players, brought in linebacker Thomas Davis and quarterback Tyrod Taylor, while only losing cornerback Jason Verrett and wide receiver Tyrell Williams to another team thus far.

“Los Angeles’ holes lie at on the offensive and defensive line and the free safety position, but they will have an opportunity to build a solid foundation with their seven selections.”

With the draft a little over a month away, here is our look at the latest mock drafts. While some prognosticators have already listed their second and third mocks, others have just recently put out their first mocks of 2019. Although most analysts still have the Chargers selecting a defensive player at No. 28, only two — Daniel Jeremiah and Charles Davis — have the Bolts taking a safety.

* Jeremiah had the Chargers taking Alabama LB Mack Wilson in his 1st mock.

Bucky Brooks (NFL.com) 3rd Mock — Dexter Lawrence, DT, Clemson. “Given free agent Corey Liuget’s uncertain status, Lawrence could be a target for the Chargers at this pick. As a massive space eater with exceptional athleticism, Lawrence will occupy blockers and create opportunities for the team’s linebackers to flow freely to the ball.”

Mel Kiper Jr. (ESPN) 2nd Mock — Jerry Tillery, DT, Notre Dame. “Corey Liuget, Brandon Mebane, Darious Philon and Damion Square are all free agents, which means the Chargers have to address defensive tackle in free agency or in the draft. I thought they could have taken a DT in Round 1 last year. As I noted in my first Mock Draft, L.A. was pushed around in its playoff loss to the Patriots. Tilley is a good interior pass-rusher with tremendous size (6-6, 304) and athletic traits. He has some versatility, too.”

* Kiper had the Chargers taking Clemson DT Christian Wilkins in his first mock.

Todd McShay (ESPN) 3rd Mock — Dexter Lawrence, DT, Clemson. “L.A. already has Joey Bosa and Melvin Ingram on this defensive line. now drop a 342-pound run-stopper with 5.05 speed and high-end athleticism. With multiple members of this unit heading toward are agency, Lawrence would be a great get.”

* McShay had the Chargers taking Jerry Tillery in his first two mocks.

Chad Reuter (NFL.com) 3rd Mock — Kaleb McGary, T, Washington. “Despite McGary’s lack of length, he’s a powerful and athletic player who will help the Chargers secure the right side of the line the way Braden Smith did for the Colts in 2018.”

Peter Schrager (Good Morning Football Host) 1st Mock — Will Grier, QB, West Virginia. “Teams seem to be a lot higher on Grier than folks in the mock draft world. Los Angeles could take Grier here, and get him for four years with a fifth-year option in his contract. No one is pushing Philip Rivers out the door any time soon, but having Grier — who I believe will see his stock rise the most of any QB at the combine — waiting in the wings would be wise.”

In his latest 4-round mock draft following the first wave of free agent signings, Luke Easterling (DraftWire) has the Chargers upgrading the interior defensive line by selecting Clemson DT Christian Wilkins. Said Easterling, “The Bolts have one of the league’s best edge-rushing tandems in Joey Bosa and Melvin Ingram, but they need to reload the interior with young talent. Wilkins is a rare athlete for a 300-pounder, with the explosiveness to be a disruptive force for any team, in any scheme.”

Easterling also has the Chargers taking Washington OT Caleb McGary in the 2nd round; New Mexico St. LB Terrill Hanks in the 3rd round and Buffalo QB Tyree Jackson in the 4th round.

The Endzone: Six Chargers were recently named among the Top 101 Free Agents by NFL.com’s Gregg Rosenthal and Chris Wesseling. Below is a look at their evaluations.

No. 36: Tyrell Williams. “Deep speed is hard to find in free agency and Williams has it. He would make for an excellent addition as a role player in a spread-the-wealth offense.”

* Williams signed a four-year, $44 million contract with the Oakland Raiders.

No. 37: Denzel Perryman. “One of the NFL’s hardest tacklers, Perryman stuffs the run when he’s healthy. Unfortunately, he’s missed a total of 20 games over the last three seasons.”

* Perryman signed a two-year, $12 million contract extension with the Chargers.

No. 50: Adrian Phillips. “A former special teamer, Phillips earned his first Pro Bowl nod as a linebacker/safety hybrid in 2018. Its fair to wonder if he’s best suited to Gus Bradley’s defense, which makes heavy use of dime packages.” *Phillips re-signed with the Chargers for one-year, $1.5 million.

No. 67: Corey Liuget. “A 103-game starter over eight seasons with the Chargers, Liuget’s free agency timing couldn’t be worse. He’s coming off late November surgery for a torn quadriceps muscle.”

* Liugit remains unsigned as we went to print.

No. 69: Darius Philon. “Entering the market at age 25, Philon might just hit the jackpot after emerging as a solid starter on last year’s Chargers playoff squad.”

* Philon signed a two-year, $10 million contract with the Arizona Cardinals.

PFF’s take on the Chargers’ moves during the first week of free agency, “Despite the losses of Jahleel Addae and Jason Verrett, the Chargers secured the middle of their defense by resigning Denzel Perryman and by signing a proven veteran in Thomas Davis.

“Perryman ranked top 20 in run-stop percentage and passer rating allowed in 2018, while Davis earned his best overall grade (74.2), proving that he isn’t slowing down yet at age 35. Brandon Mebane’s re-signing also keeps a proven veteran locked up, but it remains to be seen how effective he will be.”