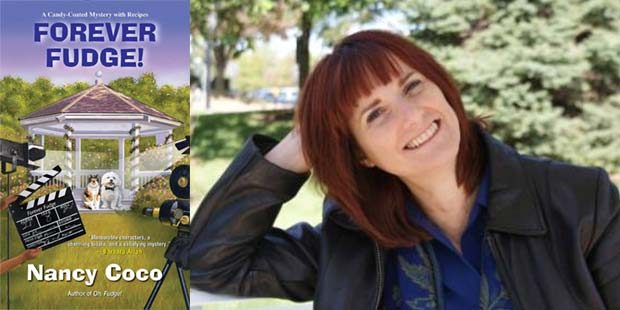 “Forever Fudge” by Nancy Coco is a sweet cozy, mystery. Readers will salivate with the fudge recipes, be charmed on the Mackinac Island, and attempt to crack the murder mystery along with the main character Allie McMurphy.

Coco is a great pseudonym for the “Fudge” series.

“I really enjoy writing these cozy mysteries with the humor and solving the puzzle,” Coco said. “While writing my first series, I would put recipes on my blog. Then a friend of mine suggested I should write in this genre with a gluten-free bakery. My last name was specifically chosen for this series. I love fudge, actually anything chocolate. The person in the apartment next to us said it always smells like chocolate in my house. Not only does it smell good but tastes good as well.”

Allie is an amateur sleuth. She and her dog Mal have an uncanny ability to find dead bodies. In the past, she has helped the police solve cases. As the owner of a delightful hotel and fudge shop on Mackinac Island, Allie’s excitement has grown after a television crew arrives on the island to film a television pilot for a mystery series.

Throwing a wrench into the enthusiasm is the dead body found by Allie’s adorable Bichon-Poo puppy, Mal. Shot in the head, the body discovered has a letter with clues from chess moves. As the killings mount up, the murderer continues to taunt Allie, trying to get her to play his game.

The island plays a role in the story.

“I have a huge family living in Michigan, which is where the island is located,” the author said. “If you ever saw the movie, ‘Somewhere in Time’ starring Christopher Reeve, you can picture the setting. The island does not allow cars, so people travel by foot, horse and carriage or bicycle. It is a cool, touristy place.”

There is also a love triangle. Allie is being wooed by two courters. She broke up with Trent Jessup because a long-distance relationship is not working, with him spending a lot of time in Chicago. The other beau is Police Chief Rex Manning who is being persistent in pursuing her, yet, willing to give her time and space.

“I thought it is interesting to compare ‘in love versus loving someone.’ I love my male friends but being ‘in love’ has excitement, a commitment and intimacy,” Coco said. “Allie is starting to build connections but some old timers see her as an outsider. One of those who accepts her as part of the community is Rex, who sees it as his responsibility to protect her and the community.”

Actual recipes are dispersed throughout the story. “I purposely did it this way to show what Allie is working on. I sprinkle it throughout to give the feel and flavor to what she is actually making. I try to relate it to the story when possible. I remember my first contract with Kensington Books required me to write ten recipes per book. Luckily, they downsized that amount. Since they had to be originals it was a relief.”

This story has an intriguing mystery, some romance and humor. It is a fun who-done-it plot that has no shortage of suspects. Readers will be looking forward to the next installment, “Fudge Bits,” out next fall, a Halloween plot. It will highlight her cat instead of her dog that finds a Zombie body.