From gridiron glory to WWII legend 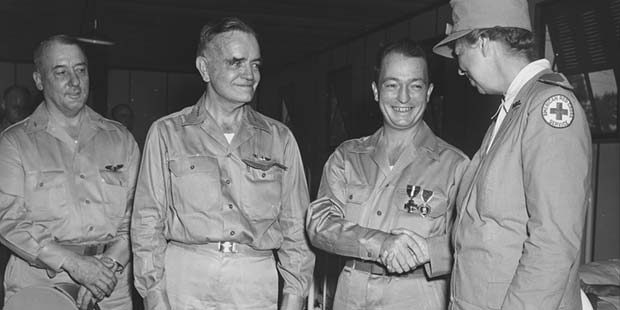 The USS Strong (DD 467), a WWII destroyer sunk by a Japanese torpedo in July 1943 in the Battle for Kula Gulf, has been located on the Pacific seafloor by the Research Vessel Petrel. The wreck serves as a watery grave for at least 46 U.S. Navy Sailors. Its discovery has rekindled a uniquely American story of remarkable resiliency, grit, fearlessness and resolve.

The story of Lt. Hugh Miller and the USS Strong is best told in Stephen Harding’s “The Castaway’s War: One Man’s Battle Against Imperial Japan.” Decades ago it was the subject of a Life Magazine article and “This is Your Life” episode, hosted by a young Ronald Reagan.

If you haven’t heard of the USS Strong or its famed crewmember before, you probably will soon. A production company has acquired rights to his story and a major movie is reportedly in the works. Its leading man is out of central casting.

Born in Tuscaloosa, Alabama, to a well-to-do family, a young Hugh Barr Miller was especially active. He spent considerable time as an adolescent hunting, fishing, trapping and generally being an outdoorsman on an expansive estate his family owned in Mississippi. His fitness in the field paid life-saving dividends later in the war, but proved highly beneficial even before that.

A hometown hero, the 140-lbs. Miller played for the Alabama Crimson Tide football team, and even started two games as quarterback. The Tide went undefeated in 1930, and won the famed Rose Bowl over Washington State in 1931 by a score of 24-0. The Crimson Tide were named national champions.

After college, he went on to begin a career in law, until joining the Navy in support of the mounting war effort. Stuck stateside in Florida assigned to a staff position, he would bump into Navy Cmdr. Joseph H. Wellings. Wellings was on his way to assume command of the soon-to-be-commissioned USS Strong (DD 467), being built in Bath, Maine. After some convincing and cajoling by Miller, Wellings saw to it that the lawyer-would-be-surface-warfare-officer would join the wardroom.

The ship commissioned in August 1942, and Miller would serve as the 20 mm and stores officer. His posting was topside on the flying bridge. His role in battle was to direct the aim of the anti-aircraft gunners against attacking aircraft. A college-level quarterback, he had a keen eye for blitzing foes, and could quickly yet effectively communicate to his teammates where to focus their aim – while under fire. Besides, his fellow crewmembers would not let him forget his ‘glory days,’ affectionately nicknaming him “Rose Bowl.”

USS Strong had an impressive, but short, service record. She earned three WWII battle stars for action in the consolidation of the Solomon Islands, the New Georgia Rendova-Vangunu Occupation, and destroying RO-43. She had less than one year of active service.

Ultimately, her end came on July 5, 1943. American forces were landing at Rice Anchorage supported by Strong, USS Honolulu, USS Helena, USS St. Louis, and USS O’Bannon. They were headed for Kula Gulf to shell Japanese shore installations. Strong and Nicholas entered the harbor and opened fire not long after midnight. The burst lasted about ten minutes. Minutes after the salvo, Strong was struck by an enemy Long Lance torpedo. The successful torpedo strike is thought to be from one of the greatest distances ever in warfare.

Within a few minutes, Strong was listing and going down. Surrounded by darkness, and in the heat of enemy and friendly fire from ships and shore bombardment, things appeared desperate. In a bold move, the USS Chevalier (DD 451) rammed Strong. The crews cast nets and lines over the two co-mingled ships to effect a deck-to-deck rescue. The abandon ship order was given on Strong.  In approximately seven minutes, under chaotic, hazardous conditions, with enemy submarines lurking, in the firing range of hostile enemy bases, and explosions all around, 234 enlisted men and seven officers, about three-quarters of the ship’s company, made it across onto Chevalier. As enemy fire rained in, the Chevalier pulled away.

Strong, possibly splitting in two, was slipping below the surface. As Strong became awash, her depth charges exploded, killing and injuring some of the Sailors in the water. The blasts were so powerful they rendered Chevalier’s radars and sound gear useless.

Miller, who was working to disentangle a few Sailors from netting on the Strong’s deck was unable to get to the Chevalier before they withdrew, and slipped unharmed into the water. He was not so fortunate once the Strong’s armed depth charges exploded. He incurred significant internal injuries.

He awoke on a float net with a small number of Sailors. He drifted in and out of consciousness for days, until their group landed on Arundel Island. Once marooned there, it became clear his condition was hindering the group’s options. He ordered the three surviving Sailors to leave him and seek refuge and rescue. Given his grave condition, he even provided his boots to one of them.

Armed Japanese squads were patrolling the island, and despite his injuries and days of malnutrition and dehydration, he was able to evade being discovered. He assumed he would succumb to his injuries, but he fought to survive. At one point, while hidden, he watched as one Japanese soldier stepped directly over his position. As his luck held out and his physical condition stabilized, his hopelessness began to ebb.

Fortune smiled on him again when the body of a dead Japanese soldier washed ashore. Miller recovered a grenade, bayonet and even some moldy but edible rice. He put each to good use. He ate coconuts to sustain himself. During a rainstorm, he was able to retain water in a small tin he possessed.

As the days wore on, his health actually improved, and he was emboldened with a rejuvenated determination. Using guerilla warfare tactics, he waged a one-man war against the enemy. In the next few weeks, he killed as many as 15 Japanese according to accounts, using captured bayonets and grenades. He attacked three Japanese machine gun nests. Some of his remarkable success throwing grenades might be attributed to his University of Alabama quarterback experience. His younger days spent outdoors in Mississippi as a tireless sportsman clearly proved vital in evading capture and surviving in the elements – injuries notwithstanding.

After 39 days on the island, he was finally re-united with U.S. forces and provided important intelligence regarding Japanese positions on the island.

Miller was awarded the Navy Cross, personally bestowed on him by Eleanor Roosevelt who was on a Pacific swing with the American Red Cross.

For his war service he was awarded the Navy Cross, two Silver Stars, six Bronze Stars, two Purple Hearts, and 27 other individual and unit decorations. He retired as a Navy Captain before passing away in 1978.

He is not the first citizen from Alabama to make his mark on the Navy and nation. In fact there have been at least 34 ships named for the state or its residents. Today, the submarine USS Alabama (SSBN 713) quietly prowls the seas.

The story of Lt. Hugh Barr Miller is one story, however, that deserves Hollywood treatment. The producers will have their hands full giving it justice. It seems the Navy tried years ago in this dramatization.

As our nation finds itself in a great power competition with China and Russia the waters in the Pacific are increasingly uncertain. His example is one Sailors should know, and strive to honor if they are ever called upon by our nation.

Want to hear more stories of heroism as a result of Strong’s sinking? Read “Strong Crew and Rescue Set Sailor Standards for Initiative and Toughness.”