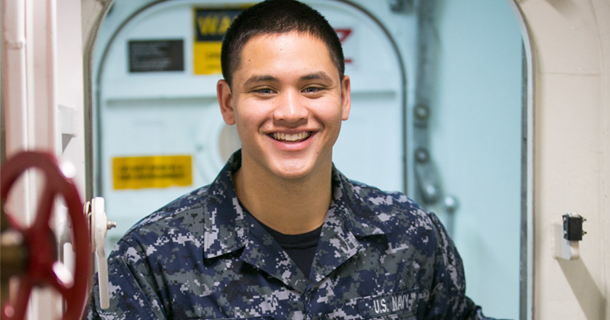 Fireman Apprentice Gregory Chilson is a gas turbine systems mechanic aboard the destroyer operating out of Yokosuka.

YOKOSUKA, Japan – A 2012 Olympian High School graduate and San Diego native is serving aboard the U.S. Navy destroyer USS Fitzgerald (DDG 62), living and working at the Navy’s forward-deployed base south of Tokyo.

Fireman Apprentice Gregory Chilson is a gas turbine systems mechanic aboard the destroyer operating out of Yokosuka, which is located approximately 35 miles south of Tokyo and accommodates the United States’ furthest forward-deployed naval forces.

As a Sailor with numerous responsibilities, Chilson said he is proud to serve his country aboard a destroyer in Japan. He added that it is an exciting time to be in the military, and serving in the world’s greatest.

“Without us, the ship doesn’t move,” said Chilson. “Every system that supports the movement of the ship, and we also work with the ships air service.”

Chilson also said he is proud of the work he is doing as part of the Fitzgerald’s 300-member crew, living thousands of miles from home, and protecting America on the world’s oceans.

“This is a really good ship,” said Chilson. “I enjoy the community and being aboard the ship. They do a lot of things to keep us having fun such as ice cream socials and game nights.”

As a member of one of the U.S. Navy’s most versatile combat ships, Chilson and other Fitzgerald sailors understand they are part of a forward-deployed team that is heavily relied upon to help protect and defend America across the world’s oceans.

“I love the opportunity the Navy gives you and the leadership skills it teaches you,” said Chilson. “The Navy really prepares you for a lot of things in life and it pushes you to show how great you can become.”