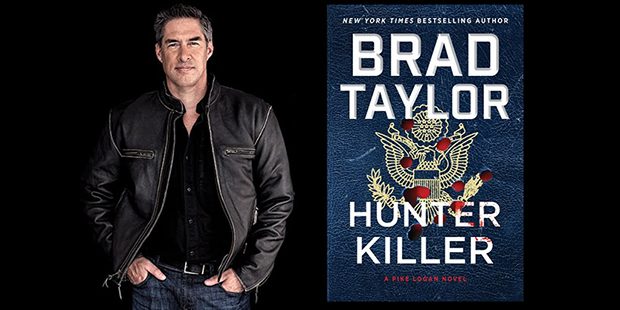 Hunter Killer by Brad Taylor brings Pike Logan and company to a new house, that is a new publishing house, William Morrow.  But fans should not worry since Logan does not skip a beat in making sure Americans are kept safe.

In this latest novel, Pike and Jennifer Cahill, his longtime teammate and girlfriend, are relaxing in their Charleston home. But their tranquility is interrupted after a vicious explosion kills a friend. The perpetrators set it up to look like an accident, but it was actually foul play, and Pike knows the attack was meant for him.

Told to stand down by their superiors, Pike and Jennifer know there’s no way they’re sitting this one out. To make matters worse, two other members of the team have been taken hostage along with the other passengers on a ferry in Brazil. To get to the bottom of this, former Israeli Mossad Agents, Shoshana and Aaron, are asked by Pike to temporarily join the team. After arriving in South America, Pike and company must battle Russian assassins, find out who is behind their friend’s murder, and become entangled in a scheme involving Brazilian politics and a cut-throat battle for control of offshore oil fields. They are now on a quest for personal retribution and to protect American foreign interests, while trying to stay alive.

The story gives readers a thrilling ride.  An added bonus is how former army Colonel Taylor, reminds people that those who serve view their team as family and will do anything to protect each other.

Brad Taylor: I knew there is a Russian company that has its footprints all over the world.  Russia also wants to get a foothold in South America.  Through my research, I came across the Brazilian election and realized that Russia could have a hand in it as well as getting a piece of the pie with the Brazilian oil fields.

EC:  Shoshana and Aaron are back?

BT: They are main characters in a sense. This plot has an emphasis on Shoshana, but I usually write them in every 3rd book or so since they are not part of the taskforce.  Originally, I planned on having her killed, but liked her character so much I decided to just put her on the shelf.  Then I brought her back to help Pike.

EC: Are Pike and Shoshana a lot alike?

BT: She was broken at a very early age.  Pike is different because he had a normal life that was broken after his family was killed. He is now revisiting the trauma because of his friend dying.

EC:  You have the team about to assault a Church where the bad guys are hiding?

BT: I put this Pike quote in the book, “I don’t get to pick where terrorists stay.  I just wipe out the nest, wherever that ends up.” The Church is in the capital of Brazil and is very famous, and used to be a convent. When I was serving, I definitely had to deal with this as a soldier in Iraq.  There are judgement calls regarding what should be done, just as Pike had to make a decision.

EC: It seems Jennifer and Pike influence each other?

BT:  I explained in the book how Jennifer once left Pike because she did not want to associate herself with actions she felt betrayed her moral compass.  She was completely black and white then.  But now she has grown to understand that there is a lot of grey.  Pike has rubbed off on her some. But Jennifer is also Pike’s backstop in life.  As explained with this quote, “Her moral compass has led me out of a forest of evil.”  Their attitude came from two philosophical schools of thought.

EC:  Can you explain them?

BT: One is where people consider action is moral or immoral based on the action itself.  The other is where action is moral or immoral based on the outcome.  For example, thou shall never/ever torture. But what if there is this bomb in NYC and is going to go off in one hour.  Would someone torture for the greater good? In the beginning, Pike is definitely a greater good guy and Jennifer is from the other thought.  But now they both realize that the other has a point.

EC: What did you mean by the quote, “The people in this room have an inflated sense of their own power”?

BT: I wanted to show how some people do not want to get shot, but are more than willing to let others get shot.  The guys on the ground will make the decision since they have the moral compass and character to do it.

EC:  You also have leakers as traitors?

BT:  They are traitors.  But whistle blowers are different.  Let’s say a defense contractor is defrauding the American government by selling defective body armor. Then someone that knows this has an obligation to come forward.

BT:  I used to drive one.  It was a nice and sweet ride.  I was going to buy my daughter one to teach her how to drive a stick shift. It turns out they are collective items and very expensive.  I did not want to pay all that money for just a name.

BT:  I always like to stay on top of current events and whoever is bad at the moment is who I will write as the enemy.  The next book delves into China. People can see excerpts from my books by going on my website. It will be another Pike book out next year.  I only write one book a year because the pace was too grueling.  I used to edit one book, market a second book, and write a third book.