Inside look at 2019 draft possibilities 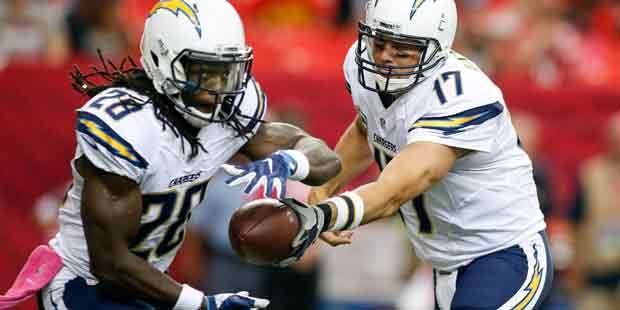 With the Chargers sitting in second place in the AFC West with a 5-2 record at the midseason point, we decided to take a look into the future — specifically the 2019 NFL Draft. Although the 2018 season is in full swing, Pro Football Focus (PFF) writer Steve Palazzolo recently put out his second mock for the 2019 draft.

In this article we will focus not only on Palazzolo’s predictions for the Chargers, but the entire AFC West.

Since putting out his first mock following week three, much has happened to change Palazzolo’s outlook for the division. For instance, the Raiders now have three first round picks as a result of trading receiver Amari Cooper to the Cowboys and with the Chargers riding a five-game win streak, he has the bolts picking No. 28 in the first round following a postseason berth in his second mock.

In his first mock he listed the Chiefs as the only team making the playoffs from the AFC West, picking at No. 30 in the first round.

With Philip Rivers entering the final years on his contract and running back Melvin Gordon proving to be one of the top ball carriers in the league, Palazzolo has the Chargers selecting an offensive lineman in both mocks. It is no secret the Chargers are going all in to not only give Rivers a shot at playing in a Super Bowl, but more importantly, to establish a fan base in the LA. market it is sorely lacking.

Here is a look at Palazzolo’s mocks and the draft slots he believes the teams will select from.

Oakland Raiders — In his mock II, Palazzolo has GM Reggie McKenzie and head coach Jon Gruden rebuilding their defense via three picks in the top 15 selections. Trading LB Kahlil Mack to the Bears devastated the entire team and the front office is hoping stockpile the defense with impact players prior to moving to Las Vegas in 2020.

Pick No. 4 – Deandre Baker, CB, Georgia. It’s a great draft to revamp a weak defense and it starts with Baker, the top-graded corner in the nation at 91.4 overall to go with a passer rating of only 31.3 into his coverage.

No. 11 (from Dallas) – Deionte Thompson, S, Alabama. Another defensive playmaker for the Raiders, Thompson is a do-it-all safety who can play center field, in the box or in the slot, all leading to the top grade among safeties at 92.0 overall.

No. 14 (from Chicago) – Brian Burns, Edge, Florida St. The defensive trifecta is completed by adding Burns, who currently leads the nation with 51 total pressures and adds a much-needed athletic edge defender to Oakland’s front-seven.

In his first mock prior to the Cooper trade, Palazzolo had the Raiders picking at No. 7 and No. 15 in the first round.

Mock I. No. 7. Denote Thompson, S, Alabama. One of the breakout stars early in 2018, Thompson has shown that he can be a do-it-all safety, from playing deep zones to covering the slot to playing in the box. His 93.3 overall grade leads all safeties through four weeks.

No.15. (From Chicago Bears). Quinen Williams, DI, Alabama. Another breakout star for the Crimson Tide, Williams is currently the highest-graded interior defensive linemen, has been dominant against the run and he’s gotten after the quarterback with an 89.3 pass-rush grade that ranks sixth in the country. He adds a much-needed playmaker to the Oakland defensive line.

Denver Broncos — Despite finishing a disappointing 5-11 in 2017, the defense ended the season ranked fifth against the run (84.9 yards per gm.). However, sitting at 3-5 with a defense currently ranked 27th against the run (135.75) and 22nd in total yards per game (373.25), Palazzolo has the Broncos bolstering the defensive front rather than quarterback in his second mock.

Mock II. No. 9. Dexter Lawrence, DI, Clemson. Few interior defensive linemen can stop the run and push the pocket quite like Lawrence and he has three straight years in which he’s graded between 84.0 and 90.0 in the PFF system.

Mock I. No 21. Will Grier, QB, West Virginia. The second quarterback off the board, Grier is one of the best downfield throwers in the country and he’s the highest-graded quarterback in the nation at 94.1 overall. With one more year of Case Keenum under contract, the Broncos are one of few teams around the league that is still in the market for their future signal-caller.

Los Angeles Chargers — As stated above, Palazzolo has the Chargers adding depth to the offensive line in both mocks.

Mock II. No. 28. Tyler Biadaasz, C, Wisconsin. Biadasz can play multiple positions on the interior and he’s an excellent all-around center, grading at 80.9 overall this season.

Mock I. No. 20. Greg Little, OT, Ole Miss. Little still has room to grow, but he’s continued to progress since being a five-star recruit. This season, he’s allowed only two pressures on 130 attempts, and he can start right away in Los Angeles on the right side.

Kansas City Chiefs –- Sitting a top the AFC West with a 7-1 record, the defense is clearly the Achilles heel to its high-powered offense. Currently ranked 29th against the pass (304.75), 25th against the run (127.63) and 31st in total yards per game (432.38), Palazzolo believes the Chiefs will target an impact defensive player in the draft next April.

Mock II. No. 31. Taylor Rapp, S, Washington. Defensive playmakers are needed in the Kansas City secondary, and Rapp has the ability to cover tight ends, slot receivers or running backs, all leading to an 89.1 coverage grade, good for seventh in the nation this season.

Mock I. No.30. Jerry Tillery, DI, Notre Dame. Kansas City must start rebuilding their defense and Tillery adds a big body up front that is capable of getting after the quarterback. He’s currently second among interior defensive linemen with a 90.7 pass-rush grade.

On the NFL Power Rankings front, The Sporting News’ Vinnie Iyer has the Chargers ranked No. 6 heading into week nine. Said Iyre, “The Chargers probably didn’t want the bye when they got it given how hot Philip Rivers has been. But they do need to get healthier, and there’s still hope that Joey Bosa can return for the final playoff push.”