James could be steal of the draft 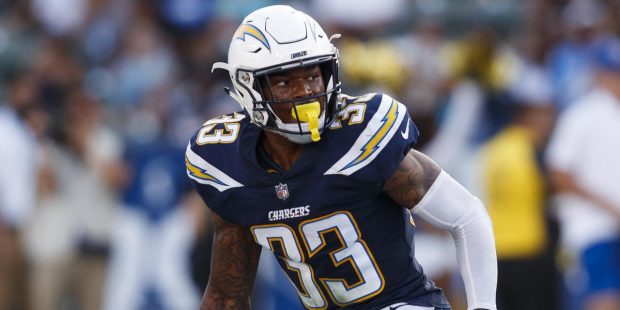 When the Chargers selected Derwin James with the 17th overall pick in the NFL Draft last April, many fans and pundits were surprised the talented safety was still available on the draft board. Regarded as one of the top two safeties in the draft, James was listed as a top 10 talent by virtually every NFL analyst covering the draft.

However, when four quarterbacks were taken within the first 12 picks, General Manager Tom Telesco wasted little time selecting James when he fell to the Chargers.

In an interview with the MP following the draft, Telesco described how James would fit into the Chargers defense.

“The safety spot in our defense is pretty unique, because we ask him to do a lot of different things as far as alignments, coverage and run responsibilities,” Telesco said. “We think that Derwin has the potential to be able to handle all of that both playing up at the line of scrimmage as a strong safety, playing back as a free safety and also having some back coverage responsibilities. So we think he brings a lot of versatility to the defense — he has some leadership capabilities, he’s big, fast and very physical.”

When asked to comment on those comparisons, Telesco replied: “Yeah, I wouldn’t put him in those categories just yet — those guys are proven NFL players at this point, so we’ll see what path he ends up taking on his own. But he does have a lot of talent and drive to be great and those are two great things to have.”

Whether the 6-foot-2-inch, 215-pound James lives up to those comparisons remains to be seen. But one thing is for certain: Pro Football Focus (PFF) has been very impressed with the Florida State standout.

“James has been a full-on Swiss Army Knife for the Chargers’ defense so far this season, seeing at least 38 snaps at four different positions on defense, and he’s not a dull knife, either,” Moy said. “The Chargers first-round pick ranks sixth among all safeties in terms of overall grade, and he’s one of five safeties who currently own season grades of at least 70.0 in run defense, coverage and as a pass-rusher. James leads all safeties with eight stops in coverage this season, and his 10 total pressures as a pass-rusher are three more than any other safety has accumulated this year.”

Moy isn’t the only writer from PFF who is high on James, Kyle Posey wrote James’ grade of 85.8 ranks him No. 3 among all safeties through the first five weeks as well. With a PFF ranking of 91.3, the Seahawks’ Earl Thomas III topped the safety list followed by the Bears’ Eddie Jackson (90.1), James, the Seahawks’ Bradley McDougald (83.9) and Bates III (Bengals).

“It’s been quite the season for the Chargers first round rookie,” Posey said. “Even after a quiet performance against the Raiders, he still continues to be one of the best safeties in the NFL. By quiet, he still had five tackles. One was for a loss and a couple were stops. For Derwin James, it was quiet.

“Coming into Sunday, James had lined up all over the place. PFF has his pass rush grade as an 89. Quarterbacks have a 56.3 passer rating when throwing at James. Derwin leads the Chargers in tackles, sacks, pass deflections, and interceptions. Here are his snaps by position. 27 snaps at defensive lineman. 81 at box safety. 35 at nickel defensive back. Five at outside defensive back. So a true corner. 103 at free safety. The split has been all over for the talented rookie. The team has put a lot on his plate, and he’s responded in a big way.”

The Endzone: Per Posey: “He (James) has as many sacks as Aaron Donald and Fletcher Cox. As many tackles for loss as Chandler Jones and Myles Garrett. Only five players in the league have more passes defended this year than James. The Chargers found a star.”

Although the Chargers finished the first quarter of the season with a disappointing record of 2-2, James was the only rookie to make Honorable Mention selection on Michael Renner’s (PFF) “NFL 2018 first quarter All-Pro Team.”

“Jackson is one interception behind (Earl) Thomas (although he had one on a nullified play) and has been a sure tackler so far with only one miss on the season,” Renner said. “Derwin James deserves some recognition as honorable mention here, though, as he’s the only rookie to make this roster. James has three sacks, two hits and five hurries on 22 pass-rushes so far.”