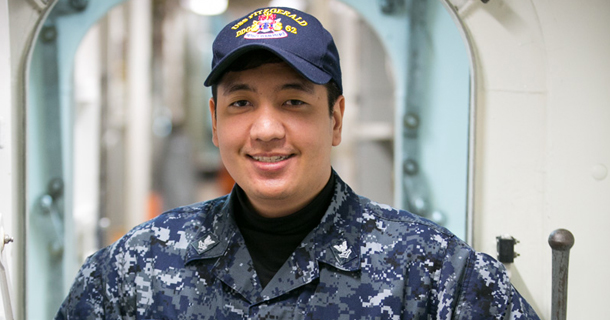 YOKOSUKA, Japan – A 2006 Morse High School graduate and San Diego native is serving aboard the U.S. Navy destroyer USS Fitzgerald (DDG 62), living and working at the Navy’s forward-deployed base south of Tokyo.

As a Sailor with numerous responsibilities, Villamarin said he is proud to serve his country aboard a destroyer in Japan. He added that it is an exciting time to be in the military, and serving in the world’s greatest.

“I work with administrative paperwork for officers and enlisted sailors,” said Villamarin. “We route most of the correspondence to the commanding officer, the executive officer and the command master chief. I am also the security manager, the legal yeoman.”

Villamarin also said he is proud of the work he is doing as part of the Fitzgerald’s 300-member crew, living thousands of miles from home, and protecting America on the world’s oceans.

“I feel like this ship has more of a close knit crew because of its size,” said Villamarin. “We see everybody every day, but on the aircraft carrier I was on, you see people every few weeks because it is so big.”

As a member of one of the U.S. Navy’s most versatile combat ships, Villamarin and other Fitzgerald sailors understand they are part of a forward-deployed team that is heavily relied upon to help protect and defend America across the world’s oceans.

“I enjoy all the traveling I’ve done in the Navy,” said Villamarin. “I have traveled to a lot of different ports and have experienced a lot of diversity.”