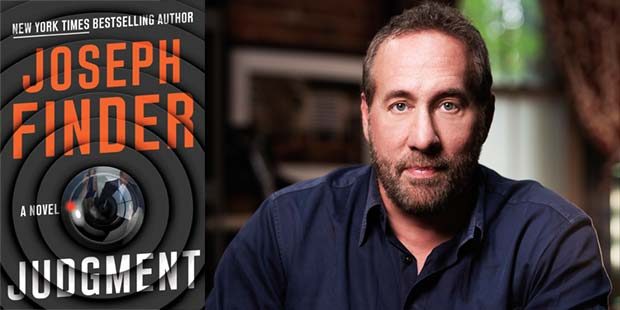 “Judgment” by Joseph Finder takes an occurrence and uses it as a jumping off point. He has a knack for having an incidental event magnify into a riveting conspiracy mystery.

“I met a judge socially and spoke with her about the pressures she faces,” Finder said. “I started to think, what would happen if her children get into trouble, or what if she gets many speeding tickets? I interviewed five women judges practicing in Boston for this book. The sense I got was that they went through a lot to become a judge, having to go through interviews and making sure they do not step on toes as they climbed the ladder. Then I thought how vulnerable judges are in the courtroom. Unexpected and explosive things could happen. It is almost as if they are all alone and on their own.”

The plot begins with the protagonist, Judge Juliana Brody, in a rare error of judgment, having a one-night stand at a legal conference in Chicago with Matías Sanchez, who claims he’s a businessman from Buenos Aires. Because of this incident her life will swell out of control. Sanchez is not who he made himself out to be, but is one of the lawyers for a defendant on a high-profile sex discrimination case Brody is presiding over. To make matters worse, he threatens to blackmail her with a video of their encounter unless she rules in the defendant’s favor. It becomes clear that personal humiliation, even the possible destruction of her career, are the least of her concerns, as her own life and the lives of her family are put in mortal jeopardy. She discovers her adversaries include powerful and ruthless criminals who will kill anyone who stands in their way. Brody decides to investigate her enemies and to play their game, becoming cunning and fearless.

“I wanted to write Juliana as a kickass. As a former prosecutor, she is tough and persistent. At the beginning of the story Juliana is someone who always followed the rules, but now is willing to break the law to achieve a greater good. I like writing about ordinary people who are suddenly caught up in something extraordinary. There is a Russian word that bests describes this story, kompromat. It means compromising materials. The Russians are very good at blackmailing people. This includes the oligarchs who are dangerous and should not be trusted.”

Brody is someone readers will connect to and root for, especially after it is revealed that she is fighting those in the Russian oligarchy. Finder has Brody wonder if the Russians are working on their own or puppets for Putin. She is an admirable person who has always played by the rules and had no sympathy for those who do not. Yet, after her one lapse in judgment she realizes way too late that the attempt to cover up is often regarded as even more reprehensible than the original deed.

This briskly-paced story explores how those in positions of power can be susceptible to blackmail. At every turn, the reader takes a journey with Brody as she becomes involved in double crosses, espionage, financial impropriety, corporate corruption, and sexual harassment.