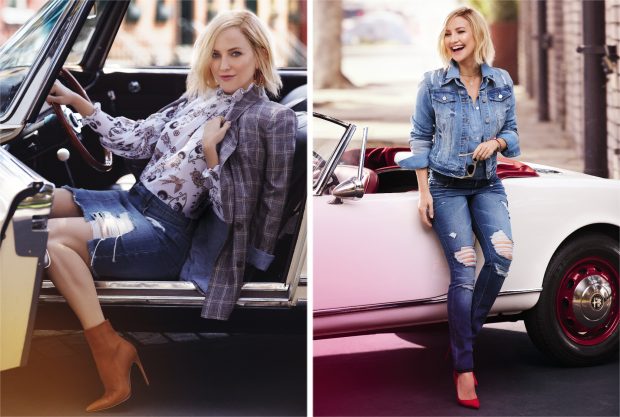 Yet another celebrity has partnered with a retailer. This time it’s Kate Hudson and the retailer is New York & Company. The company revealed on Tuesday exclusively via WWD (Women’s Wear Daily) that the very talented actress will serve as ambassador of the $225 million Soho Jeans franchise and will partner with them to develop her own ready-to-wear brand.

Greg Scott, the chief executive officer of New York & Co. states, “Our customers have been asking for a partnership with Kate for years.”

“We believe her star power, style and broad social influence will not only strengthen our relationships with existing customers but also ignite our customer acquisition initiatives.”

Apparently, there are big plans in store for Kate Hudson’s collection. In addition to being sold at New York & Co.’s stores and e-commerce sites, it will also have its own dedicated e-commerce platform. Their goal is to create a wholesale opportunity and brand to be sold in other places, not just in New York & Co.

Her brand will build its own digital platform and storefronts.

“It has always been important for me to partner with companies that share my values and creative vision,” Hudson said. “I love the quality of materials and fabrics New York & Co. uses.”

“Their size ranges and affordable price points, along with their commitment to empowering women through fashion makes New York & Co. an ideal partner for me to launch my new collection with.”

More celebrity tie-ups will be introduced to New York & Co in the not-too-distant future as well as social media influencers and a small, plus size company.

The base of Kate’s collection will consist of denim, outerwear, dresses for casual occasions and beyond, tops, sweaters and sportswear.

“It’s going to be a full, well-rounded lifestyle collection,” Scott said. “I call it ‘statement casual.’ Kate’s style is very unique and very special and each piece will be unique and special and will embody what Kate is about. We hope these pieces will be coveted.”

Hudson, who is expecting her third child this month, has said in recent interviews that she wanted to get into fashion. The actress already is a fashion mogul in her own right. Fabletics is a brand that she co-owns. The brand was created in 2013 and has grossed more than $300 million in annual revenue in its fifth year.

“We believe Kate represents the lifestyle of Soho jeans with her downtown attitude. The line will be designed to ‘fit everyone,’ and include sizing ranging from 00 to 20, including petite and tall.”

Did you catch the VMAs (Video Music Awards) the other day? You know I’m always interested in who wore what and as usual, it was very interesting, scary and bizarre! I think I must be getting old because I had no idea who the majority of the people on the red carpet were or what industry they represented! I assumed it was the music industry, but so often people attending the various award shows aren’t in that industry.

More lately trendsetters and/or influencers, social media celebrities are taking over the red carpet … hence my not really recognizing who they are.  The VMAs and the music industry pretty much caters to the Generation Z and the ‎Millennials age groups.

The link below is a quick overview of the red carpet from the VMAs, where Jennifer Lopez was presented with the Lifetime Achievement Award. I did recognize her and she still slays: