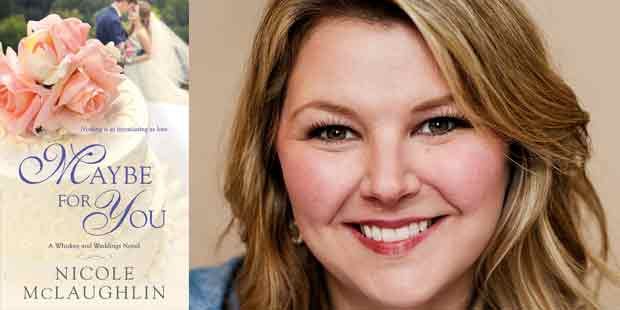 “Maybe For You” by Nicole McLaughlin has a very emotional storyline. The theme allows readers to understand how to cope with loss and handle grief. It is also a friends to lovers story.

Many say that a guy and gal cannot be friends. This story seems to prove that point. The different dynamics of relationships play a part in how people react to each other. Friends usually are able to be direct and let their guards down without having to build walls. Usually these relationships are based on honesty where each person can show their true selves. Some of the best intimate relationships start off as friends.

The heroine, Alexis, and the hero, Jake, began their friendship as pen pals while she was deployed in Italy. They did not literally converse with a writing object, but used the modern way, a phone text. McLaughlin wanted “it to be a safer way to share feelings without being face to face or voice to voice. These two are able to share only when they feel like sharing.”

Alexis is not used to displaying her emotions, keeping everything close to the chest. Her parents died in an auto accident, she was raised by her older brother Dean, and now has lost her fiancé in a military helicopter accident. Anyone who has lost a loved one, especially when it is unexpected, can relate to this powerful quote, “Several times she had to talk herself out of just crawling back into bed… Moving on, healing, required putting one foot in front of the other. Even when it felt impossible.”

The story poignantly shows how those grieving can move on, that time heals. Yet, there are also instances when something can spur someone’s memory about a loved one, and that feeling of being hit in the gut returns.

“I wanted to write about this because I experienced it,” McLaughlin said. “I put in the book how sometimes the weight of the pain feels brand new. I lost my father when I was 10. I watched my mother and how she dealt with losing a partner. I think I put my own feelings in these scenes. My dad has been dead almost 25 years and every once in awhile a thought pops up in my head and I cry instantly. I think the grieving process is a long journey.”

But it is also a story of hope. After a year serving overseas Alexis returns to her home town in Kansas. Her brother offers her a job at the Stag Distillery he owns with two friends. But it also ended up becoming one of the most successful wedding and event venues in the Kansas City metro area. To promote their business one of the partners, Jake, travels on the road to find new clients. Realizing that Alex would be a good addition for making sells, it is decided that she will travel with him. Ready for a new challenge, Alexis agrees to accompany her new co-worker, Jake. Soon the casual relationship becomes intense where both realize they have strong feelings for each other.

“I wrote how their relationship was grounded in respect and friendship,” McLaughlin said. “Both needed someone that they cared for. They were able to tease and joke with each other, feeling very comfortable, because they started out as friends. They appear as opposites since Alexis is a survivor, strong, broken, vulnerable, determined, desperate for a family, and is very guarded. Jake is a player, a playboy, who always feels second best. As Alexis opens up to him about her feelings he listens, doesn’t pry or lecture about what she should be feeling. Slowly he transitions from a playboy to a partner.”

This is a very emotional story that will tug at the heart. There are many touching scenes with very likable characters.