Ellenberger looking to redeem himself at UFC 184 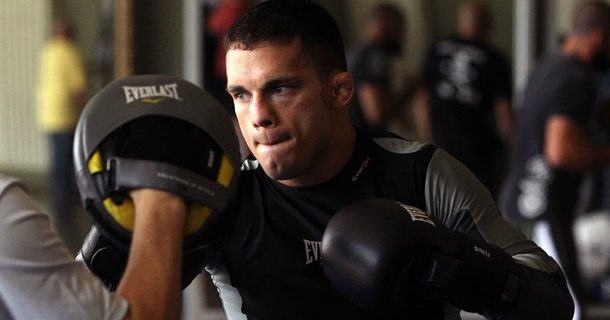 With the main card now set for UFC 184 Rousey vs. Zingano on Feb. 28, one of the more intriguing matches of the night is a welterweight battle between longtime UFC veterans Jake ‘The Juggernaut’ Ellenberger and Josh Koscheck.

In an era of ‘what have you done for me lately,’ this could very well be a make or break fight to stay active in the UFC with both fighters entering the Octagon riding a three-fight losing streak. As the fight approaches, Ellenberger, a former Marine, answered a few questions from MP reporter Art Garcia Jr.

AG: What made you decide to join the Marines?

JE: One of my best friends growing up already enlisted and I thought it was like the toughest men on the planet.  I can be that guy.  I had that young and ignorant ambition to join.  I also had lots of other friends enlisting in infantry. You really learn what real life is, that’s how I got intrigued. (I was) attracted to being the best.

AG: Did your experiences as a Marine have any effect on your MMA career?

JE: It really did.  It gave me more discipline for starters; it was a big wake up call for me. (Being a Marine) had a big impact, that’s how I got interested in training.  I had fun training because of the discipline and structure I learned.

AG: Can you describe the feeling of knocking out an opponent?

JE: It’s a little bit surreal.  Sometimes we forget as human beings the power and potential we possess. As a competitor, you always want to do what it takes to win.  The accomplishment of the win is great, but at the same time you don’t want anyone to get seriously hurt.

AG: Tell me about Josh Koscheck and how you match up against him?

JE: He’s kind of toward the end of his career.  As far as us matching up, it’s a fantastic fight.  There is nowhere I feel like he can beat me.

AG: What’s your key to victory over him?

JE: Just staying relaxed; enjoying it and not doing anything stupid.  Stay disciplined the entire fight.

AG: Is fighting more mentally or physically challenging for you?

AG: How is your camp going? Did you have any major changes?

JE: Things are going well.  I’ve been working with a guy who did a lot of Special Forces work in his background.  No big changes, training partners that match well with Koscheck’s abilities.

AG: How much longer do you see yourself competing and what are your plans once you do retire out of the ring?

JE: Fighting is so physically and emotionally demanding.  It’s tough to say how much longer I will fight. A couple years – three or four at most with no injuries or anything?  It’s hard to say.  I would be interested in broadcasting, I enjoy that.  Maybe be in some movies, make a couple million!

AG: If you could compete in another pro sport what would it be and why?

JE: I played a lot of sports growing up.  I loved playing hockey and baseball.  I played almost every position in baseball; I was all over the field. We weren’t wealthy growing up so it was street hockey, too expensive to pursue.  Maybe I would play baseball.  It’s tough to say.

AG: Last question – it’s Feb. 28th — walk me through the day, what’s your routine? Is it the same pre-fight preparation with regards to meals; music; meditation; relaxation; other?

JE: I really just try to stay relaxed; listen to a lot of music and just relax and meditate. I try not to think about it – don’t let it mentally drain you. I also like to watch movies.

Although he’s lost three consecutive fights, one has to look at the opponents before relegating Ellenberger unworthy of the UFC. In July of 2013 he lost a unanimous decision to Rory MacDonald at UFC on Fox: Johnson vs. Moraga – MacDonald is currently ranked #2. Last May he lost via TKO (knees & punches) in the third round to Robbie Lawler at UFC 173 – Lawler is the current Welterweight Champion.  Last November at UFC 180, Ellenberger was submitted (rear-naked choke) by Kelvin Gastelum – currently ranked #10, Gastelum was the winner of The Ultimate Fighter: Team Jones vs. Team Sonnen. Ellenberger is ranked #11 and owns a record of 29-9-0.