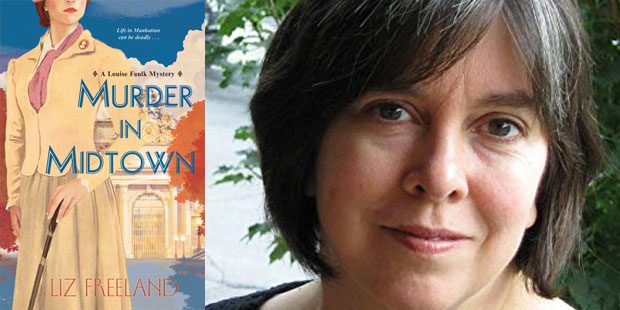 “Murder In Midtown” by Liz Freeland brings to life New York in the early 1900s. Besides a good mystery, readers will be enlightened about the different social issues during that era.

The plot begins with a fire breaking out at a publicity house. It is the one Louise Faulk works at while waiting to see if she has passed the exam to become an NYPD police officer. As the investigation of the charred ruins begins, rumors of foul play are already circulating. Trying to get to the truth, the firm’s surviving partner asks Louise to investigate the matter, knowing she has experience in police issues. While trying to find who murdered her boss, Guy Van Hooten, Louise finds herself searching for answers from one end of New York to the other, crossing paths with all levels of society.

“Without having the technology, I am freed up, so the police have to use only clues to figure out the who done it. Although, it was an era when some technology cases were using blood types to help in the investigation. A lot of the research I do is trying to figure when things started to happen in terms of forensics.”

Louise is determined, has an independent spirit, and is focused on the clues. She is very motivated on finding out who would want her boss dead. Having helped in solving one murder, she has experience in investigating this next one to cross her path.

Social issues of the period make the story relevant. This includes a Jewish character who faces Anti-Semitism, a mixed marriage couple, and a famous entertainer who gets embroiled in the story.

“Besides those social issues, I wrote about corruption during that era,” Freeland said. “I put in the quote about politicians, policemen, and functionaries could be bought. The corruption was a cancer on the system. It was a town where anything went. This is when the progressive era was starting to clean things up. They tried to turn the ship around and enact laws.”

The plot has quite a few suspects and plenty of red herrings, twists and turns to keep readers guessing along the way. It is a delightful cozy mystery intertwined with historical depictions, an exciting turn of the century New York City setting, and a plucky protagonist.