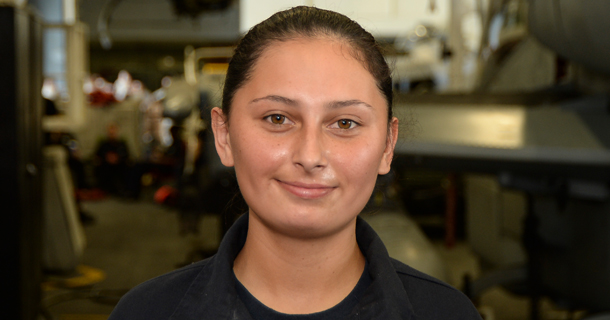 Seaman Jessica Stewart, from San Diego, a graduate of Little Axe High School, enlisted into the Navy just 10 months ago and is currently stationed aboard the amphibious assault ship USS Makin Island (LHD 8), which is deployed to the U.S. 5th Fleet area of responsibility.

“I was inspired by my family,” said Stewart. “I have a lot of relatives who also served in the Navy.”

Stewart works in Makin Island’s Deck department. She is responsible for participating in many shipboard evolutions such as ship preservation, manning the boat deck, and the ship’s sea and anchor detail.

“I like being able to help moor the ship to the pier when we pull into port,” said Stewart.

Stewart explained that her favorite thing about working in Deck department is the camaraderie between her and her shipmates.

“My department has a huge variety of people from different parts of the world and different experiences,” said Stewart. “Getting to know all of them has been cool. We all look out for each other. We’re like a family.”

Stewart is serving on her first deployment contributing to Makin Island’s mission of helping to promote peace and freedom of the seas in support of the Navy’s maritime strategy. Makin Island has conducted port visits to Hong Kong and Singapore where Stewart and other Sailors and Marines were able to venture, sight-see, and participate in tours and community relations projects.

“Both ports were awesome,” said Stewart. “Seeing all the different culture such as the Buddha Temple and the way they drive on the left side of the road was interesting.”

Stewart said she is looking at the Navy as a career and hopes to one day make it to the rank of Chief Petty Officer.

Thank you very much for your support of the men and women in U.S. Navy, deployed around the clock and ready to protect and defend America on the world’s oceans