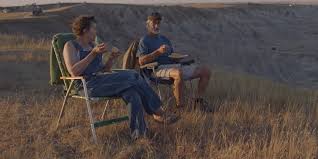 Currently in theatres and on Hulu from writer/director Chloe Zhao and Searchlight Pictures is the cinematic splendor of NOMADLAND.

Fern (Frances McDormand) has lost her job in Empire, Nevada when the US Gypsum plant shuts down and her husband has died. She makes the unusual decision to buy a van, get rid of belongings and find work. When a friend recommends the desert and a place where others who are living in their wheels, Fern initially says thanks but no thanks.

As the winter becomes stronger and the van becomes colder, Fern changes her mind and heads for Arizona. Each day she becomes more and more able to take care of problems that arise when she is alone. Taking a job at the RV park, she meets David (David Strathaim) who cares about what Fern is going through. When he has the chance to be with his family, David asks Fern to come and once again she says thanks but no thanks.

The worst happens when the van Fern lives in breaks down and the repairs are extensive. Turning to a family that wonders why she remains aloof, which makes her feet hit the pavement even faster back to the van. In the constant flow of people in and out of her life, Fern must make a decision about life and the road ahead.

McDormand as Fern is absolutely brilliant, stunning, epic and perhaps someone I relate to more than I thought I would. She offers up the life of a person who has never been as people wanted her to be and the decision to life a different life is normal. I think we have all had the moment where we wondered if we had the soul to pack it all up and learn to be totally alone. McDormand gives us a look at it and besides the bucket incident, its tempting for soul search reasons. She is a gentle soul but tormented at the same time.

Strathaim as David is a gentle soul and sees that Fern is as well but can not seem to let herself step into the next part of her life. Knowing friendship is all there is does not mean he will not take the moments to show Fern what is possible by hoping, wishing and accepting. Strathaim is the actor that always manages to be a stabilizing force in the roles he takes and I’m a fan.

Searchlight Pictures is responsible for such films as SLUMDOG MILLIONAIRE, 12 YEARS A SLAVE, THE SHAPE OF WATER and THREE BILLBOARDS OUTSIDE EBBING MISSOURI. They have an extensive film library as well as documentaries, scripted series, and limited series. For more information please visit www.searchlightpictures.com.

NOMADLAND is a film that brings the effects of life from Ferns point of view. From jobs to death, friendship, long periods of solitude, avoidance, a silent life story and meeting people who do not judge her decisions.

McDormand says so much even when she is not saying a word in this character. She is actually playing off of everything and everyone around her. The scenery represents her emotions, and the rocks are the toughness to the breeze blowing as Fern tries to let go of so many things. Yes, it is absolutely clear that I am so moved by this film.

NOMADLAND is also a 2017 book by Jessica Bruder and it was McDormand who reached out to director Zhao about the project. She believed that “The groundwork had been laid. Most people love telling you their stories if you are willing to listen”.

Zhao says of the work, “I’ve always been drawn to the road from a young person’s perspective, but to be able to step into the shoes of people who are rediscovering themselves on the road in the twilight of their years was a very interesting experience I wanted to have”.

And what an experience it is shooting in four months and basically becoming a nomadic cast and crew themselves to tell this heartfelt story.