Philips had Pro Bowl in his sights 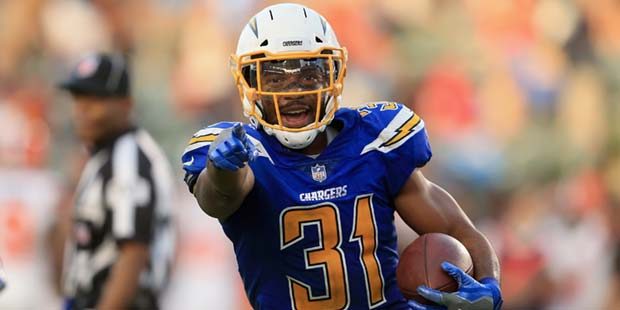 It has been a great holiday season for Chargers’ safety Adrian Phillips. First, the former undrafted free agent was named to his first Pro Bowl and then the Chargers made the playoffs for the first time since 2013. And to top it off, Phillips led the team with 12 tackles (8 ) and two es in the Chargers 23-9 victory over the Denver Broncos in the regular season finale. As the team prepared to face the Baltimore Ravens in the Wild Card Round of the playoffs this Sunday, Phillips answered a few questions from MP reporter Art Garcia Jr.

Art Garcia Jr: Congratulations on being selected to your first Pro Bowl. Tell me your thoughts when you received the news.

Adrian Phillips: You know, its a great feeling to be picked by your peers and the staff and players around the league, recognizing me is something that I worked hard for and being able to accomplish that was a great feeling.

AG: Were you surprised?

AP: Yeah, it was a surprise because when I checked the voting I wasn’t on the list, so I didn’t think I met that goal. But when the names got released and I found out I was on it I was thoroughly surprised.

AG: So who was the first person you shared the news with?

AP: My wife. I called her and told her I made the team and she was really ecstatic for me because we made it a goal at the beginning of the year and we both hadn’t met our goals. I had to tell her, so there was a whole lot of yelling and a bunch of emotion let out … it was fun.

AG: So one of your actual goals prior to the season was to make the Pro Bowl?

AP: Yes, I told my wife that this year I want us to make the Pro Bowl by any means — special teams, water boy or ball boy, I just wanted to be there.

AG: This is your fourth year with the Chargers, what has been the biggest progression in your game over that time?

AP: I would say just confidence. Each year I have gained more and more confidence which has allowed me to play faster and I take everyday as it’s my last day so when I come out here I try to put it all out there on the field. When you have that confidence in your film study and you’re learning new things it allows you to be able to play a lot faster.

AG: Who has been the biggest influence on helping you achieve your goals in the NFL?

AP: I would have to say my former teammate Eric Weddle. I didn’t really know too much about him other than he was a free safety, but when I came out here a friend of mine told me to be on the look out for him. On that first day I saw how he carried himself on the field and how he orchestrated everything by moving parts out there. So I asked him if I could shadow him for however long he was there and he let me. It was tough too, it was one of the toughest things I did and I know after that it was when I really started to gain more confidence and started understanding the game a lot more.

AG: Weddle is considered one of the smartest players in the NFL, was there anything specific he taught you that had a profound effect?

AP: Watching film at the collegiate level and at the professional level is totally different — with different keys and different things to look for. Wedge taught me what to look for, how to get a certain beat on things and also understanding my abilities and strengths and how certain scenarios will play out for me. So it was basically a combination of all those things — being on the lookout for what the offense has and playing it to your strengths. Some people like to line up and run straight through a brick wall and some people like to open the door (and spread things around), it just depends on your strengths.

AG: With that being said, many analysts are saying the Ravens have a huge advantage because you guys don’t have enough time to figure out a successful game plan to stop the read-option they execute under QB Lamar Jackson … What are your thoughts?

The Endzone: The staff at Pro Football Focus (PFF) released its annual year-end quarterback grades for the 2018 NFL season. Leading the Chargers to its first playoff appearance since 2013,

PFF’s Michael Renner also named three Chargers on his 2018 NFL ALL-PRO TEAM. Defensive back Desmond King made the first team in the FLEX position. Said Renner, “King was quite comfortably the top slot cornerback in the NFL this season. His 22 coverage stops were the most of any cornerback in the league, as only 22 of his 78 targets resulted in first downs.” Both Keenan Allen and rookie Derwin James were named to the second team at wide receiver and safety, respectfully.