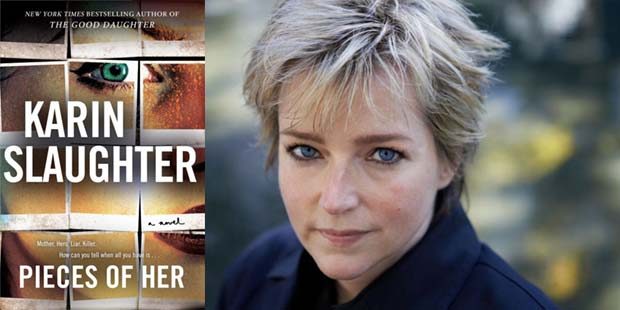 “Pieces of Her” by Karin Slaughter is a spellbinding, psychological thriller. The suspense keeps ratcheting up as she throws curve ball after curve ball to the readers. At the heart of the story is the mother-daughter relationship and the hidden secrets. How well does someone know their parents?

“I think a lot about this,” Slaughter said. “How many of us realize that our mom/dad had a life before us? No matter how old you are you do not want to realize your parents had this life and have secrets. For example, I had not idea my dad was an electrician. Sometimes we do not think to ask our parents about their life before we were born. Andy realizes that Laura had a secret life she knows nothing about, where her mother had a whole new backstory.”

Andrea (Andy) Cooper thought she knew her mild-mannered mother. But that changes after a spree shooting in a mall restaurant where Andy and Laura are celebrating her 31st birthday. Laura shows a completely different side — a courageous woman willing to stand up to this killer to save her daughter. She dispassionately confronts the killer, first disarming him, and then knifing him with his own weapon, making it appear that she was somehow trained to kill.

The police and media attention to Laura’s actions unleashes the attention of a life-threatening sort. For nearly 30 years she’s been hiding from her previous identity, lying low in the hope that no one would ever find her. But now she’s been exposed, forcing Andy to go on the run where she becomes determined to unravel the mystery of her mother’s past, in hopes of saving them both. In her quest, Andrea realizes that she only knows what her mother, Laura, chose to reveal.

“When I was writing this I realized it is very subjective,” she said. “How do you quantify that you did it because you are scared? Because everyone has cell phones and videos, there was something to look at and see how each were standing and what they were saying. I think the police and prosecutors have a lot of leeway on determining if someone should be charged. I also think public reaction plays a great influence. I wanted to talk about the idea of perception. Do we really know what is in Laura’s mind when she does that action? Did she do it out of self-preservation or anger? I think she would probably get the benefit of the doubt.”

With alternating chapters between the present, 2018 and Laura’s past in 1986, Slaughter writes flawed but sympathetic characters with hidden motivations driving their choices. After returning home to help her mother recover from breast cancer, Andy is still a millennial struggling to find herself with no obvious career goals. She has always felt inferior to her parents. Her father, Gordon Oliver, is a trusts and estates attorney; her mother, Dr. Laura Oliver, is a speech therapist, a pillar of the community. Gordon is the only character in the story that is a solid figure who is responsible, caring and patient.

Interestingly, “I wrote about the generational gap. Millennials want to rise to the top. They have to realize they must start at the bottom before trying to run the entire company. I did enjoy playing with the generational differences of Laura and her daughter. The book is published overseas already and I can see the different generational reactions. The millennials are keyed into Andy, where those in their late thirties or older gravitate toward Laura. Andy is someone that at her age of thirty-one is way too dependent on her parents. At a very early age, it was made very clear to me that I had to find a job. In the beginning of the book, she is like that guy we heard about on the news who is forty and still living at home.”

Slaughter is one of those special authors that take readers on a journey with the characters. Throughout the novel, the timely subjects of cancer, abuse, cults, injustice, obsession, and violence are explored. Those who have read her in the past know that Slaughter has set the bar high and with this intense story she does not disappoint.