Playoff hopes still have a pulse 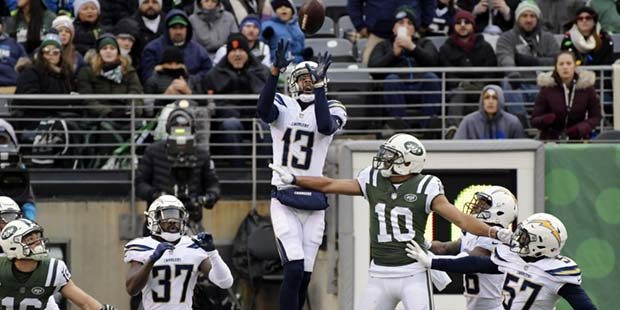 The Los Angeles Chargers are still alive for a playoff berth with an old foe standing in their way — the Oakland Raiders. Following a 14-7 victory over the New York Jets last Sunday, the easiest path to the postseason is a win over the Raiders this Sunday, plus a Ravens win over the Bengals and a Titans loss to the Jaguars.

However, the Chargers don’t necessarily need the Ravens to win to earn a playoff berth. If the Bolts beat the Raiders and the Bills and Titans lose to the Miami Dolphins and Jacksonville Jaguars, respectively, then they get in as the sixth seed.

If either scenario plays out, the 2017 Chargers will join the 1992 Chargers as the only teams in NFL history to make the playoffs after starting the season 0-4. In addition, both teams will have made the postseason under the direction of first-year NFL head coaches — Bobby Ross and Anthony Lynn.

Philip Rivers passed Hall of Fame quarterback John Elway for No. 8 in career completions in league history with 4,123. Rivers also surpassed 4,000 yards for the season, becoming the fourth player in league history to post nine or more 4,000-yard seasons (Peyton Manning with 14, Drew Brees with 12 and Tom Brady with nine).

Running back Melvin Gordon eclipsed 1,000 yards on the season for the first time in his career. His 1,012 yards mark the 20th time a Chargers has posted a 1,000-yard season. With his 18th rushing touchdown of his career, Gordon moved into the ninth spot in Chargers history.

Gordon also moved into sole position of the eight most catches among running backs in team history, passing Keith Lincoln (123) and Don Woods (125). He also passed Mike Tolbert (1,012), Rickey Young (1,030) and Paul Lowe (1,045) for the 11th most receiving yards by a running back in team history.

A glimpse into the future

With a little over a month left in the 2017 season, many pundits have started posting their mock drafts for 2018. In his first mock, DraftWire’s Luke Easterling believes the Chargers will be slotted with the 15th pick in the draft. Here is a closer look at the players Easterling predicts the Chargers will take in the first four rounds including a quote on two of the players from a couple of well-known draft analysts.

With the 15th pick in the draft, Easterling has the Chargers selecting Notre Dame offensive tackle Mike McGlinchey. Easterling: “If the Bolts want Philip Rivers to stick around for a few more years and play at a high level, they’ll need to keep him healthy. Last year’s draft netted some stellar interior blockers, but they still need a franchise tackle like McGlinchey, who is as polished and experienced as any in this class.”

Easterling has McGlinchey ranked as the second-best tackle in the draft and No. 22 overall on his top 25 prospect big board.

SB Nation’s Dan Kadar agrees with Easterling’s projection regarding both the Chargers’ draft position and taking McGlinchery at No. 15. Kadar: “Joseph Barksdale has been a problem at right tackle for the Chargers, and McGlinchey could start his career on that side of the line. Having him along with 2017 picks Dan Feeney and Forrest Lamp on the inside will help the Chargers finally field a solid line.”

As of Dec. 15, ESPN Draft Analyst Mel Kiper Jr. has McGlinchey his top-ranked offensive tackle and No. 18 overall on his draft big board. ESPN’s other well-known analyst, Todd McShay, had McGlinchey ranked higher at No. 14 amongst his top 32 players. Ourlads’ NFL Scouting Service ranks McGlinchey No. 25 overall on its top-33 prospect list.

Ourlads’: “Three-year starter and two-time captain from Philadelphia, PA. The rangy athlete lines up at left tackle in the Notre Dame spread offense. Has spent his entire career under the guidance of former NFL offensive line coach Harry Hiestand. Cousin of Matt Ryan, he has an outstanding combination of height, length, and bulk. Good athletic ability with quickness, balance and explosiveness. Solid pass blocker, has good set quickness and quick feet to reach his set point. Rarely oversets. Above average use of hands and punch timing to win defender’s chest. Has a very good anchor. When he does get beat, he fails to reach his set point and will panic and lunge. Has the lateral quicks to match angles as a zone run blocker and can create vertical or horizontal movement.”

With the 47th pick in the draft, Easterling has the Chargers addressing the secondary by selecting DeShon Elliott, a safety from Texas. Easterling and Kiper Jr. have Elliott ranked as the No. 6 and No. 7 safety prospect, respectfully.

Continuing to bolster the defense, the Chargers select USC linebacker Cameron Smith with the 79th pick.

Kiper ranks Smith the fifth-best inside linebacker, Easterling has Smith as the 8th best linebacker prospect.

With pick No. 111, Easterling has the Chargers addressing the quarterback position by selecting Riley Ferguson out of Memphis. Ferguson is listed No. 10 out of the 15 quarterbacks Easterling ranked in his Dec. 11 article.

According to the ESPN Insider rankings, the 6-2, 201 Ferguson is the 8th-ranked quarterback and number 117 prospect overall.

Said ESPN Staff Writer Dan Graziano: “He moved up in the eyes of many with his on-field performance, but Ferguson also comes with concerns about size and durability at the next level.”

The Endzone: While Easterling has the Chargers waiting until the fourth round to select a quarterback, McShay has the Bolts selecting Oklahoma quarterback Baker Mayfield in the first round with pick No. 19. McShay: “Orlando Brown is an option at offensive tackle here, but this is a good time for the Chargers to take a successor to 36-year-old Philip Rivers. Los Angeles passed on Patrick Mahomes and Deshaun Watson last draft, but Mayfield is too intriguing to pass on here. Perhaps no prospect has improved his stock more in 2017 than Mayfield, who was my ninth-ranked QB coming into the season, with a midround grade. The Heisman winner is an exceptional leader and could play himself into the first round with a good showing in the College Football Playoff.”

Mayfield was the No. 4 ranked quarterback and No. 27 overall on McShay’s top 32 prospects. McShay: “The issue for him is that he doesn’t have the ideal measurables of an NFL starter, and he doesn’t have an elite trait to compensate, like Russell Wilson’s scrambling ability or Drew Brees’ accuracy.”

While Kiper also has Mayfield ranked as the No. 4 quarterback, he has the Sooner quarterback higher at No. 13 overall on his big board. Kiper: “I love him on the field — he’s not afraid to take shots downfield, and he has an underrated arm — but his size is going to be a question until he gets in front of scouts at the Senior Bowl [he hasn’t said whether he’ll attend] or the combine.”

Mayfield has at least one more opportunity to impress NFL scouts in a College Football Playoff semifinal game when the Sooners face the Georgia Bulldogs in the Rose Bowl on Jan. 1. Win that game and Mayfield will lead the Sooners against the Clemson/Alabama winner in the CFP National Championship on Jan. 8 in Atlanta.