Marines may have unknowingly been exposed to radiation in Hangar 296 at closed California base.

(IRVINE, CA) – The former Marine Corps Air Station (MCAS) El Toro, California is an EPA Superfund, closed by the Marine Corps in 1999 and most of the former base sold at a public auction in 2005.

There may have been as many as 300 Marines and more unknowingly exposed to radiation from 1969 to 1999 in the Wing Supply Support Division attached to MWSG-37, MCAS El Toro.

Other units occupied the contaminated space after WSSD was transferred elsewhere on the base. The details on the number of Marines at risk to exposure in the north mezzanine of Hangar 296 are not known at this time.

According to Roy F. Weston, a Navy contractor, the administrative space in the hangar had previously been occupied by a Ra 226 paint room in the 1940s and 1950s, much of the area was found to have, or had, a potential for radioactive contamination based on site history, or known contamination above established release limits, categorized as Class 1.

Other portions of the north mezzanine have, or had, a potential for radioactive contamination based on site history, but are not expected to exceed established limits, categorized as Class 2.

Ra 226 is about one million times as radio active as an equivalent mass of uranium. The Marine Corps and other military services mixed Ra 226 with zinc sulfide to create radio luminescent paint for aircraft gauges and instruments, allowing aircrews to see the instruments in the dark.

The light emitted by the paint is due to the radiation energy deposited in the luminescent crystals by alpha and/or beta particles.

Imagine for a moment that you’re one of the millions of veterans who served at a base now on the EPA Superfund list.

Like many veterans you now live far from your former military base, don’t have access to the internet, have no contacts with former military friends, may be seriously ill, and unable to “connect the dots” of your illness to military service.

In fact, you may have been separated from the military for decades and have no clue that your illness is related to military service. I was luckier than most. I had worked for the EPA IG, knew my way around computers and the internet and just happened to come across a website on El Toro’s Superfund status. I nearly fell off my chair. The EPA had traced the TCE plume to Hangars 296 and 297. Further research revealed that a Navy contractor in 2002 reported the north mezzanine of Hangar 296 contaminated with radiation from a former Ra 226 paint room.

Unlike someone injured on the job from exposure to contaminants, there’s no workman compensation for a veteran to cover medical expenses or even the possibility of filing a tort lawsuit for injuries.

VETERANS CAN NOT SUE THE GOVERNMENT

Based on a Supreme Court decision, veterans cannot file a lawsuit against the government for injuries incurred on active duty. Veterans can file a VA disability claim. The catch is that a successful claim requires medical evidence of injury and a nexus statement from a medical care provider, linking your medical condition to military service.

A doctor’s opinion that your injury is “at least as likely as not” related to military service may serve as a creditable nexus statement. Many doctors do want ‘to get involved with the government’ and simply refuse to write a nexus opinion. I have personally experience, “Sorry, I’d like to help but I don’t want to get involved with the government in any type of claim.”

Even if you find a willing doctor, the VA disability process may take years to settle. A 100% disabled, unmarried veteran without any dependents receives less than $3,000 per month. This is definitely not a lotto ticket.

While military service in time of war is a duty for every able bodied citizens, even the more zealous patriots may hesitant to volunteer if the environment pollution risks are known. Purple Hearts are not awarded for death from toxic chemicals and radiation.

As late as 2009, the California Department of Public Health had not approved this hangar for unrestricted use, despite the Navy’s request to do so. I haven’t been to California in three years and the status of the hangar may still be unchanged.

Exposure to Ra 226 can be deadly. The half-life of Ra 226 is over 1,600 years. After 1,600 years, for example, 2 grams of Ra 226 will still be radioactive from a quantity of 4 grams. No Marine veterans who worked in this hangar have been notified of their possible exposure to this deadly contaminant nor are there any efforts underway by the Navy or the Marine Corps to even attempt notification through the Veteran Service Organizations. 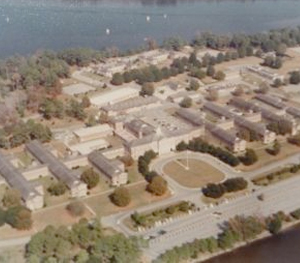 There’s no legal requirement for notification and apparently, despite its motto of Semper Fidelis, the Marine Corps feels no moral obligation to its veterans to give them a heads-up. Please don’t take this the wrong way, most Marines that I know believe in the brotherhood and will go to great lengths to help another Marine. The problem is that there’s little effort made on the part of senior Marine Corps leadership.

A glaring example of this is Camp Lejeune. The base wells were contaminated with organic solvents for 30 years (1957-1987); may Marines have died from exposure to the contaminants. Yet, except for ‘lip service,’ the Marine Corps has done very little to support health care and compensation to those injured from Lejeune’s contaminated water wells.

Oh, senior officer attended Congressional hearings and ‘talk the talk’ of supporting Marine veterans and their families but no health care bill has passed Congress and the bills under consideration were not proposed by the Marine Corps or DOD. Lewis Burwell “Chesty” Puller (June 26, 1898 – October 11, 1971) was the most decorated Marine in history, and the only Marine to be awarded five Navy Crosses. If he were alive today, Lieutenant General Puller would be leading the fight for his Camp Lejeune Marines.

The VA attributed my bladder cancer to organic solvent exposure at El Toro but it could have just as easily have come from exposure to radiation in Hangar 296. Oh, I submitted a compensation claim and went through the drill; the VA has taken a ‘hard stand.’

In a February 2012 denial (officially a Statement of the Case or SOC), the Philadelphia VA said that no supply MOS Marines worked in the hangar at El Toro and based on a VA urine analysis and white blood cell count, there’s no evidence my bladder cancer and other medical conditions came from radiation exposure.

The VA is wrong, just plain dead wrong. Hundreds of supply MOS Marines worked in the Wing Supply Support Division (WSSD) at El Toro and the VA test will only support massive dosage of radiation exposure, according to Dr. Rosalie Bertell, an international radiation expert with 40 years experience and multiple doctorate degrees.

On my behalf, Dr. Rosalie Bertell wrote to the Philadelphia VA Regional Administrator in November 2011, telling her that the VA’s radiation test was inadequate and that the only definitive test for radiation exposure is a blood breakage chromosome test from one of two government laboratories. The VA ignored Dr. Bertell’s letter.

It doesn’t sound to me like a blood test from one of two government labs would cost the VA a great deal of money, but that’s the VA SOC made it very clear that there’s no support that you even worked in a hangar (I read this as “you’re a liar”) and, even if you can support working in Hangar 296, our test show that you were not exposed to radiation.

One VA official in a thinly veiled reference to age said that this happened also 50 years ago so you now you have cancer. If this man reads this column, please note that I’ve been seriously ill for past 26 years, but never knew about the connection to El Toro until very recently.

I will appeal the VA decision but good luck without the chromosome blood test.At best, the BVA will direct the Philadelphia VA to draw the blood for the chromosome breakage blood test. If the results are positive, I win. Of course, I may be dead by the time the appeal process is completed and there’s no way to draw blood from a corpse.Gee, how do I thank the VA for all they have done for me and other veterans?

I’m trying to contact as many El Toro WSSD Marines (who worked in Hangar 296’s north mezzanine). If you worked in WSSD or any other Marine unit physically located in the north mezzanine of Hangar 296, please contact me at rodowd@live.com.

The following roster of enlisted Marines with a supply MOS 3071 is from H&HS-37, dated 30 June 1963. There were about 50 officers attached to H&HS-37. Most of the officers were MOS 7308 (pilots), probably attached to H&HS-37 but didn’t perform any aviation supply duties. Several officers were MOS 3060 (Aviation Supply Officers). The list of officers will be shown on an updated copy of this article. These Marines (all men) worked either in WSSD or in the supply warehouse. The official duty roster doesn’t show the building or hangar these Marines worked in but the VA probably knows that: