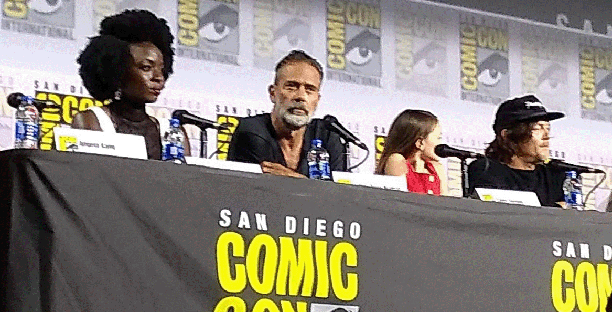 It is day two and what a day it’s been! There is no doubt it is Friday as the crowds are getting bigger and trust when I say that Saturday is going to be a day to bring plenty of patience and humor.

Today I was in Hall H and there was more than enough to keep everyone’s eyes and ears happy. Beginning with Writing Avengers: Endgame moderator Jeff Goldsmith talks to screenwriters/producers Christopher Markus and Stephen McFeely about the process of creating an immersive story. From ideas onto storyboards to making sure timelines mash up, it was a conversation that was enlightening and has everyone scratching their heads with more ways to expand the Marvel Cinematic Universe.

That wasn’t the end of it as the Russo Brothers, Joe and Anthony, took the stage as moderator Steven Weintraub broken down the years and films the two creative minds have brought to screen. Talking about the stories and showing their own boards, the audience was keen to know if they would take on the SECRET WARS storyline but no straight answer was given. The fun came when the cast ‘phoned in’ their questions and Paul Rudd walked away with the laughs. When Robert Downey, Jr. took to the screen the entire audience just about lost it seeing their one and only Iron Man again.

The morning was about to be taken over by zombies and the crowd couldn’t be happier. The moderator and host of the AMC after show The Talking Dead, the audience was thrilled at the return of Chris Hardwick to the stage for AMC’s Fear the Walking Dead. Along with Scot M. Gimple was Andrew Chambliss, Ian Goldberg, Robert Kirkman, Gale Anne Hurd, Dave Alpert and Greg Nicotero and new comer Michael Satrazemis. They all spoke on the apocalyptic universe and where the show might be headed.

After, the cast took to the stage including Lennie James, Alycia Debnam-Carey, Maggie Grace, Colman Domingo, Danay Garcia, Austin Amelio, Alexa Nisenson, Karen David, Jenna Elfman and Ruben Blades telling their stories of their characters arc and the antics that can be found on the set. The audience was treated to a preview of Sunday’s mid-season finale with the announcement of its return to finish the season on 8/11/10. Also a teaser from Gimple about a third show being planned for this universe coming soon.

On the heels of one group of zombie survivors comes the next panel for AMC’s first hit show The Walking Dead. Taking the stage first to moderate again was Chris Hardwick along with Scott M. Gimple, Angela Kang, Gale Anne Hurd, Dave Alpert and Greg Nicotero. So much has changed with Daryl, Michonne, Carol and the gang with the Whisperers wreaking havoc which, we are told, will continue. 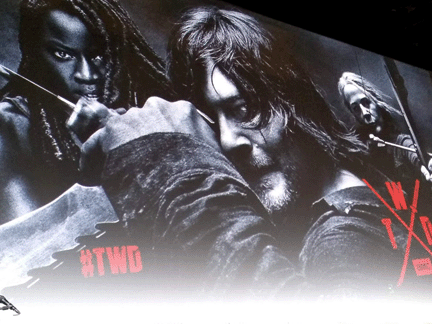 Then the cast including Norman Reedus, Danai Gurira, Melissa McBride, Jeffrey Dean Morgan, Avil Nash, Ryan Hurst, Nadia Hilker, Eleanor Matsuura, Cailey Fleming and a video message from Samantha Morton all take a seat. The hardest part of the panel was hearing it confirmed that Danai Gurira who plays Michonne will not be returning after the 10th season is finished airing. The crowd was not happy and Danai herself became emotional. To try and make it better, the crowd gave her a standing thunderous applause because, after all, once a part of TWD – always a part.

The audience had a chance to ask their questions and without giving anything away, each cast member used humor to make sure they didn’t. This was the first Comic Con for Cailey Fleming who plays Rick Grimes’ daughter Judith and she immediately enchanted the audience. At one point an attendee asked Norman Reedus if he’d consider being the leader to all those who will be invading Area 51. Once filled in on what that was all about, his reply was, “yea, sure” and the audience went wild. Of course if that were to happen I’d be there!

Netflix has a new original series coming to their programming with The Witcher starring Superman himself Henry Cavill. Of course in his role as Geralt of Rivia, he looks more like Legolas from LORD OF THE RINGS. As awesome as Legolas is, I have a sneaky suspicion that Geralt, or the White Wolf, might have a thing or two on the bow carrying elf. He is a wanderer who doesn’t realize destiny has another fate for him that involve a sorceress and a princess. The series also stars Freya Allan, Jodhi May, MyAnna Buring, Anya Chalotra, Hlynur Haraldsson, Millie Brady and I can’t wait to see it.

Game of Thrones made its final appearance in Hall H and fans had the opportunity to talk out all their feelings regarding the ending of this HBO mega hit series. Based on the George R.R. Martin books A Song of Ice and Fire, fans have embraced the characters and, I feel, needed the closure. The panel included Jacob Anderson, John Bradley, Nikolaj Coster-Waldau, Liam Cunningham, Conleth Hill, Maisie Williams, Isacc Wright and Miguel Sapochnik.

Pennyworth is a new cable series that takes viewers back in time when Alfred Pennyworth, Batman’s serious awesome butler, was a younger man. It is 1960s London and Pennyworth is a former British SAS Soldier who begins working with Thomas Wayne. The cast includes Jack Bannon as Alfred, Ben Aldridge as Thomas Wayne in this DC series created by Bob Kane and Bill Finger. The show can be found on EPIX beginning July 28th.

Amazon Prime is also bringing something unique and very mysterious with their new series Carnival Row. Orlando Bloom stars in this Victorian fantasy world of mythological creatures and learning how to live with humans. Cara Delevingne stars as the refugee fairy who has a thing for Bloom’s character Rycroft Philostrate (and lets be honest, who wouldn’t?!) There is also a screening of Carnival Row on Saturday that is going to give attendees a sneak peak at what’s to come.

Comic Con wouldn’t be, well, Comic Con without the FX series Archer having its moment in the sun. The animated series is one of my absolute guilty pleasures with the sarcasm of Archer and Lana Kane, Archer’s mother Mallory and the rest of the crew that makes this show hilarious. The panel included H. Jon Benjamin, Aisha Tyler, Jessica Walter, Chris Parnell, Judy Greer, Amber Nash and Lucky Yates. The new season is coming soon and it is in space aboard the M/S Seamus. Of course there will be aliens, pirates and the works because Archer needs something to keep his wit razor sharp!

Of course, at San Diego Comic Con International, the nighttime comes alive even more than usual. The outside events are in full swing and parties can be found everywhere for the enjoyment of attendees and non-badge holders alike. It is such a great time to meet up with friends and walk all around to just have a little fun.

Saturday promises to be once again filled with activities, shopping and panel discussions. It also means that the Marvel panel might just have a little something in store for those who have spent days waiting in line.

We will be there to cover it all!