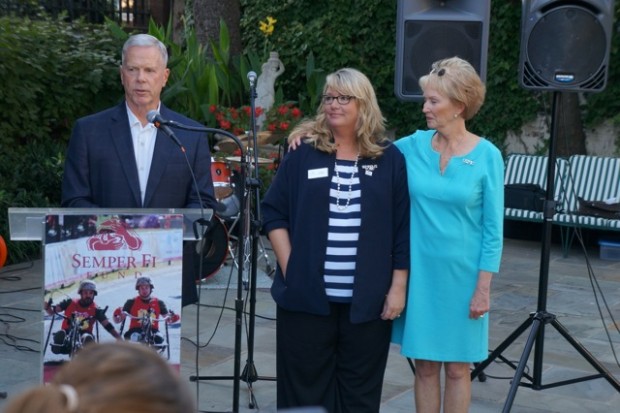 Semper Fi Fund Founder and CEO Karen Guenther has received the highest honor that the United States Marine Corps can bestow on a civilian, that of Honorary Marine. General James F. Amos, 35th Commandant of the Marine Corps, granted Guenther this title on September 20 in recognition of her extraordinary contributions in support of injured, ill and wounded Marines.

The title Marine is a revered designation that affords a special distinction to those who earn it. To appropriately recognize individuals who have distinguished themselves through noteworthy service or support to the Marine Corps, the Honorary Marine title allows for a noble designation. The title can only be granted by the Commandant of the Marine Corps.

Since the inception of the program in the early 90s, fewer than 100 people have been granted the title of Honorary Marine. The title reinforces the special bond between the American people and the Corps by recognizing individuals in the civilian community who have made extraordinary contributions to the Marine Corps.

This year marks 10 Inspiring Years of Service under Ms. Guenther’s leadership in support of injured, ill and wounded service members; since 2004, the Semper Fi Fund has helped more than 12,300 post-9/11 service members and their families with a wide range of assistance totaling more than $96 million.

Ms. Guenther was surprised with the award on Saturday, September 20 at a private event in the Marine Family Garden at the Home of the Commandants in Washington, D.C. “I’m speechless,” said a teary-eyed Karen, who was expecting to make a presentation to General Amos and his wife. Instead, it was General Amos who made a presentation—and gave the audience a new reason to celebrate!