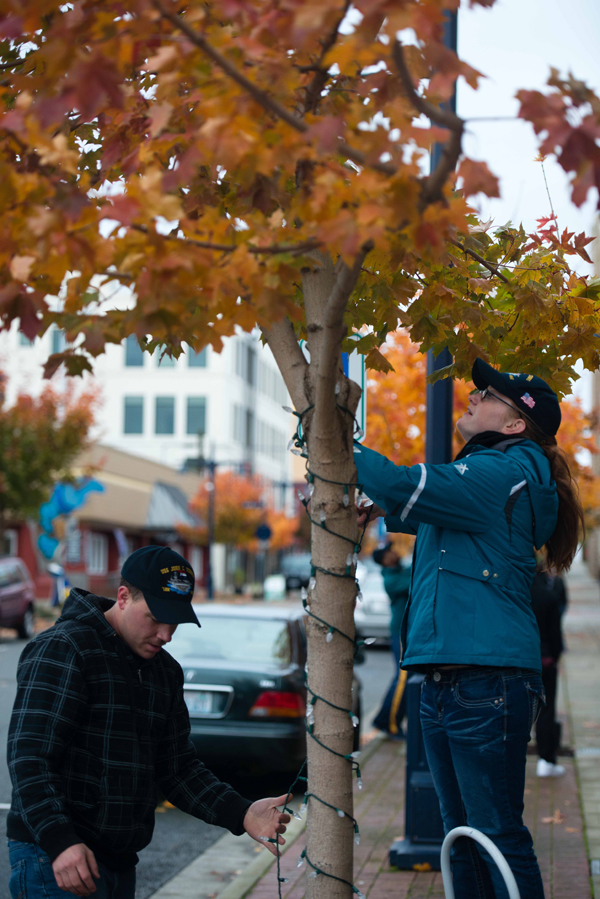 Instead of sleeping in on a Saturday, 12 Sailors met with Carlos Jara, co-owner of Toro Lounge and president of the Downtown Bremerton Association, on a Saturday morning to hang Christmas lights along Pacific Avenue and 4th Street.

While electrical plugs are installed next to the trees, it is up to Bremerton locals to decorate the streets.

“In some communities people expect the city to do everything for them, but we’re not like that,” said Jara. “If you want things done in your community, you have to take ownership.”

For the past four years Jara has helped organize decorating the city.

“I’ve put the call out for volunteers before,” said Jara, “but we didn’t get much participation until I reached out to the Stennis crew about coming out and helping us.”

Participating in the event was another way for Sailors to enjoy the holidays away from home.

“We can’t have a Christmas tree in the barracks so this is the closest thing,” said Aviation Ordnance Airman Destiny Battle, from Victorville, Calif. “Decorating things gets me in the Christmas spirit.”

Anyone interested in past and future COMRELs can contact Religious Programs Specialist 1st Class Zachary Muncrief at his command e-mail, zachary.muncrief@cvn74.navy.mil..