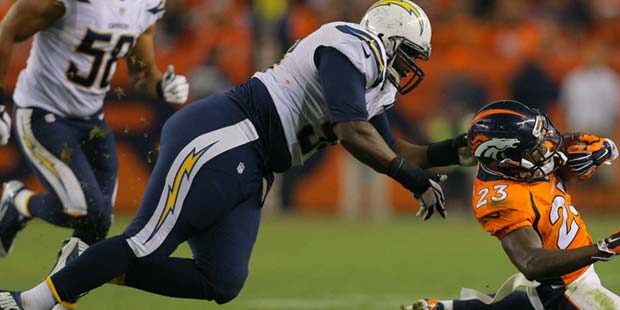 With the news of Corey Liuget’s four-game suspension, many pundits believe defensive tackle will be the position General Manager Tom Telesco selects at No. 17 in the first round of the NFL Draft. As the draft quickly approaches, April 26-28, we take a look at Travis Wakeman’s (Bleacher Report) seven-round mock of the Chargers draft and his rationalization for each pick.

Round 1, Pick 17 — Da’Ron Payne, DT, Alabama. The Chargers were susceptible against the run last year. Actually, that might be too nice. They were gashed by running backs. Only the Washington Redskins were worse. The Chargers gave up 131 yards per game on the ground and an NFL-worst 4.9 yards per carry. That is not winning football.

Vita Vea is the best player at this position and the Chargers would love for him to be here. Most of the draft experts out there don’t believe he’ll be there at No. 17 and I agree.

Strong as an ox with athleticism to match, Payne would be an immediate boost to the Chargers’ run defense and he could allow the team to move on from Liuget altogether.

I really believe the Liuget suspension changes the mindset for this team in the first round. Rashaan Evans of Alabama would have been my choice here if not for that, but it’s something that can’t be ignored and if the rookie Payne were to come in and look great, it could be a blessing in disguise.

Round 2, Pick 48 — Kolton Miller, OT, UCLA. With the recent signing of (Mike) Pouncey and the emergence of last year’s third-round pick Dan Feeney, the Chargers are building a solid offensive line. Forrest Lamp, taken in the second round last year, is a question mark because he missed all of last season, but fans should be quite excited about his potential.

The weakness of the line could be at right tackle where Joe Barksdale is currently the starter. Though Kolton Miller played left tackle for UCLA, he projects better on the right side at the professional level.

A massive prospect at 6-feet-9-inches and 310 pounds, Miller could be brought along slowly, learning behind the experienced Barksdale. He’ll need to first prove he can keep up with the speed of NFL pass rushers, but could be inserted into the starting lineup by the mid point of the season to give the Chargers a much better offensive line than most of those that Rivers has had in his time with the organization.

Round 3, Pick 84 — Josey Jewell, LB, Iowa. The Chargers need more depth at this position and the overall goal would be to improve against the run, combining with the pick of Payne in the first round. Jatavis Brown is a big question mark after he had a rough 2017 season adjusting to new defensive coordinator Gus Bradley’s system and the team has made no effort to re-sign Korey Toomer, who remains on the open market.

That leaves the team with Hayes Pullard and special teams linebacker Nick Dzubnar as the team’s only options at middle linebacker, which is why a case can easily be made to draft Evans in the first round.

Still, Jewell would be a solid pick at No. 84. In four seasons as a member of the Hawkeyes, Jewell racked up 433 tackles with 28 going for a loss of yardage. He added six interceptions and 26 passes defensed, showing that he may be able to add something in pass coverage, something that is essential in today’s NFL.

Round 4, Pick 119 — Siran Neal, S, Jacksonville St. This would be an interesting pick as well as one that could have fans scratching their heads. Why not Jessie Bates? Why not Armani Watts? A variety of reasons, actually.

Telesco has never seemed to place a huge emphasis on the safety position so it would be out of character for him to think about drafting one before this spot. Bates won’t be on the board at this spot.

For all of the questions you have about Siran Neal out of Jacksonville State, there are just as many concerns with Watts. When watching tape of Watts, I see him as a wildly inconsistent player. Lance Zierlein of NFL.com calls him a “feast or famine” player.

That doesn’t seem like a Telesco kind of pick. Instead, he’ll take a chance on Neal, who is a better tackler than Watts and brings with him better-than-perceived coverage skills as he also played cornerback in college.

Round 5, Pick 155 — Royce Freeman, RB, Oregon. The Chargers have a solid combination in the backfield of Melvin Gordon and Austin Ekeler, but adding a power back to come in at certain situations would take a load off of both of those guys and make the Chargers’ rushing attack much more formidable.

While Rashaad Penny of San Diego State is the pick many would like to see, I don’t see him still on the board at this point. Of course, Royce Freeman may not either.

Freeman fits the bill of a guy who can come in and handle five or six carries a game as well as some goal-line and short-yardage work. However, if the Chargers were ever hampered at the position and either Gordon or Ekeler had to miss time, Oregon’s all-time leading rusher could step into a more prominent role.

Round 6, Pick 191 — Kurt Benkert, QB, Virginia. Well, it’s a quarterback, though it may not be the successor to Rivers — At least not on the surface.

Kurt Benkert has a huge arm, but he’s the definition of a player that needs to sit back and develop in a pro system. His accuracy, decision-making and reading coverages can all use work.

The Chargers could take a chance on a guy like Benkert to see if he could become the guy when Rivers retires and if he can’t, well all they’re out is a sixth-round pick. I don’t see the team using a high pick on a quarterback this year because I feel the team is in win-now mode, looking to get Rivers his first ring. On top of that, I feel the team is willing to give Cardale Jones an extended look in hopes that he can just assume the role at some point.

Round 7, Pick No. 251 — Jake Wieneke, WR, South Dakota State. This pick could be used for just about anything. Down toward the bottom of the draft, you don’t have much to lose. I wanted a tight end, but couldn’t find much at this stage of the draft other than those that specialize in blocking, and the Chargers addressed that by signing Virgil Green.

Playing for the Jackrabbits of South Dakota State, Jake Wieneke didn’t receive much national exposure, but at 6-feet-4-inches, could bring a future red-zone threat to Los Angeles.

The Endzone: Here is a look at the latest first-round mocks from other ESPN’s Mel KiperJr. and Todd McShay. Kiper; Da’Ron Payne, DT. Alabama. Payne has remained the Chargers’ first-round pick in each of Kiper’s three-round mocks to this point. McShay: Rashaan Evans, LB, Alabama. In his first two mocks McShay had the Chargers selecting Baker Mayfield, QB, Oklahoma and Derwin James, S, Florida State.