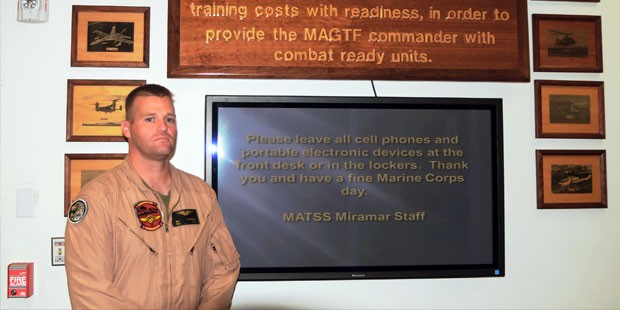 While nothing can match actual aerial combat, or even just normal flight time for a Marine fighter pilot, modern technology can lend a helping hand in keeping these Marines trained and ready for any combat mission that is handed to them.

This reporter was given the rare opportunity to visit Marine Corps Air Station (MCAS) Miramar, located just north of downtown San Diego. I was escorted by 1st Lt. S. Murdock (USMC) of the Public Affairs Office to the building housing the 3rd Marine Aircraft Wing’s Aviation Training System, or simply called the “Simulators.”

There are flight simulators here both for the Boeing/MD F/A-18 “Hornet” and the Lockheed C-130 “Hercules.” They are computer controlled and feature animated moving video on large video screens surrounding the pilot. In this “video game,” you’re sitting in a real cockpit of the subject plane; nothing like what you’d find on your home computer. Another big difference from your home computer is that the computer programs for the simulators are stored on over 20 industrial computer servers that seemed to take up over half the room where the F/A-18 simulator sat.

After entering and signing into this secured building, we were met by Major Tavernier (USMC) of Valparaiso, Indiana. He is a large man with a big smile, and as I shook his hand, it felt like a vise grip. I liked him immediately. Tavernier has been in the Marine Corps for just over 11 years. His official position at this moment is the Marine Aviation Training Support Squadron (MATSS) F/A-18 Training and Standardization Officer.

Before being assigned to his current command, he had flown with various F/A-18 squadrons such as VMFA(AW)-121 “The Green Knights” and while they were still flying, the F/A-18s VMFA(AW)-242 “The Bats.” He did see combat with the Green Knights while deployed to Al Asad, Iraq, from February to early September, 2007.
Major Tavernier’s personal awards include: seven Air Medals; two Navy and Marine Corps Achievement Medals; the National Defense Service Medal; the Iraq Campaign Medal; the Global War on Terrorism Service Medal; and five Sea Service Deployment Ribbons.

Q: Why the simulators?
Tavernier: “We have a unique situation here, as in here at Miramar, we the VMFAT- 101 “The Sharpshooters,” a training squadron for pilots who have graduated from Flight School. A really big part for us here at the simulators is to support the 101 and those Marines who are newly transitioning to the Hornet.”

Q: Can you tell the readers, what the simulator does?
Tavernier: “We have two two-seaters and three single seat Hornet simulators. We’re supposed to get a fourth single seat this summer, giving us a total of six. So as far as the 101 goes, the main purpose of the flight simulators is to transition to the Hornet from whatever previous aircraft they were trained on. So for most new pilots, it initially becomes a procedural trainer, like how to start up the jet, basic procedures like flying the jet, and later on, learning the basic tactics. So that’s the 101’s basic use of the simulator.

“As far as the fleet goes, the pilots have either gone through the 101, or through the U.S. Navy’s Pilot Replacement Air Groups. They come to a fleet replacement squadron here at Miramar, and now we’re focused more on tactics.”

Q: What are the benefits of the simulator?
Tavernier: “The nice thing about the simulators is we can teach individual aircraft mechanics, which is important, we can link 2 separate simulators together, so now you are practicing section tactics, for some air to ground missions and limited air to air missions.”

Q: So, you have your wingman with you, even in training?
Tavernier: “Yes, you can have your wingman. Then we can also link up to a four-ship simulation together, to fly a division, basically linking all the simulators together and you and your wingman fly together, fighting the same mission. It is a tremendous help to be able to simulate that just because it’s significantly cheaper than to spend money to fly the jets for the mission. It’s never a replacement for actual flying, but it’s a great supplement for the pilots to get their habit patterns down, the mechanics of the weapons operating systems, and things like that.”

Q: I’m glad you said that. Last summer, I interviewed the Commanding Officer of the Sharpshooters, Lt. Colonel Henger (USMC), and the one thing we spoke about was the minimum hours of flight time needed every month for the pilots to retain their safety qualification status. Can the simulators replace some of those hours of actual flight time?

Tavernier: “No, as far as the safety and required hours go. As far as our safety and readiness goes, the simulator can replace a mission, because on some of the missions, we may be able to do better in a simulator. As far as the amount of adversary aircraft that we can put in there, surface to air threats, and things like that, that we just can’t do in real life like flying the aircraft. We just don’t have the resources to do that. So as for the larger beefed up missions go, the simulator is great. While it can’t replace the actual flying, it can make for a better scenario on a more regular basis.

Now as for the safety aspects, the pilots do come here for some of their annual checks, such as the pilots doing their instrument qualifications in the simulator. What that allows us to do is stimulate multiple emergency situations, which, again, you can’t do in a real jet safety-wise. We can then evaluate how an aircrew reacts to the various emergencies. So, as far as air hours for safety, that should stay in the actual aircraft.”

Q: How realistic is the simulator?
Tavernier: “It’s very realistic. We’ll show you the simulator soon. Right now we are only using standard definition video graphics, but as of this summer, two of the simulators will be upgraded with HD (high-definition) graphics which will be significantly better. That will take about two and one half months to do, and once they’re done, we’ll get two more. The last two HD displays will probably come in next year, making all six simulators high definition.

But as far as realism goes, everything is realistic. The main thing you lose out on is the feeling of flight of the Hornet, pulling the “Gs” (gravity). It’s a stationary simulator, no up and down, or anything other than the video screen (the world) moving around you in the air to ground or the air to air threats, unless your lucky enough, and your unit gets pulled into a Red Flag (a U.S. Air Force exercise held several times a year in Nevada and Alaska), or the support of the WTI’s (Weapons and Tactics Instructor, a Marine exercise held twice a year in Arizona). You can not replicate the kind of threats, that you can in the simulator. That’s the biggest benefit, we can keep repeating the situations that pilots may be having a hard time at, until they get it right, which is something we could not do in a real aircraft.”

Q: With the newer pilots, being young and inexperienced, do they go in thinking it’s just a video game, but come back out sweating, saying, “Hey this was realistic, I got shot down?”
Tavernier: “Oh yeah, we strive to make the mission in the simulator as real life as possible. When you have “Blue” (the Good Guys) air losses, or bombs dropped on incorrect targets, the guys take it hard. I can speak first hand being in the simulator that the situations get stressful. You realize you’re not in the aircraft, but when the missions are run well, you lose yourself in the mission, your adrenaline is pumping, and you take it hard if there is some sort of a “Blue” lost, or something like that occurs. Not the same as a jet, but that aspect of it is definitely in the simulator.” 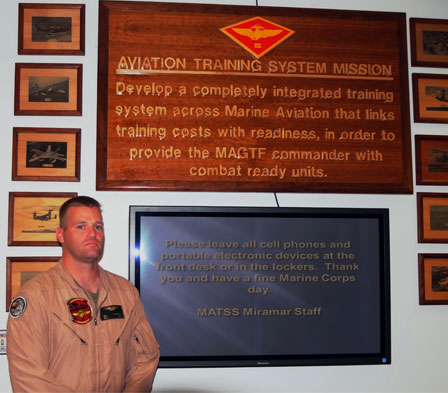 Q: When the Marine Corps upgrades its Hornets, do the simulators also get upgraded in the avionics, and what are the simulators currently modeled after?
Tavernier: “Yes, they do, and we are currently using the F/A-18 “C” and “D” models in the simulators. Out on the flight line, there are some units using the “A+” version, which is basically an “A” model with upgraded avionics, weapons, etc. The “B” model is not flown in the fleet any longer. I think there still may be a few with the Sharpshooters, and that’s mainly a two-seat trainer aircraft. Then there is the “C,” a newer single seat aircraft model, which is the missionized two-seat model, there’s no stick in the back, it can be converted to a training bird, if required, but their is hand controls for the Weapons officer to control and other sensors.”

Q: So with the different upgrades on avionics, how similar is the simulator to the real aircraft?
Tavernier: “The flight characteristics are very close to real life, but it’s such a huge lost of the real feeling of flying and pulling Gs. Sometimes, pilots will go faster than they should sometimes. They’ll pull a lot more “Gs” in the simulator, than they would in the aircraft, because there’s just no feeling of flight in the simulators. So instead of the “seat of the pants flying,” which is very important as the pilots gain more experience. You have to spend more time looking up at the “HUD” (Heads Up Display), on how the aircraft is performing. because you just do not have that feeling.”

Q: How about the Audio? Is there High-def sound effects being played into the simulator?
Tavernier: Yes, there is, the same sounds you get in the actual cockpit of the aircraft, you’ll hear in the simulator.
Q: The question nobody knows.. With the Lockheed/ Martin F-35B Lighting II coming into service with the Fleet. It has been said that the Sharpshooters may be decommissioned sometime in 2016 or 17, and replaced with a F-35B training squadron. Does MCAS Yuma, have a F-35B simulator, and when do you think they’ll start arriving at MCAS Miramar?
Tavernier: “Yes, MCAS Yuma does have a simulator for the F-35B, and yes, as the Marine Corps transitions over, we’ll have new simulators featuring the F-35B.”

Q: Is there a failure rate on the simulators with the pilots? Is there some, that just don’t get it?
Tavernier: “No, I couldn’t tell you what the attrition rate is at the 101, generally the big failure rate occurs at flight school, back long before you ever reach the Hornet.” If a unit comes into for a mission on the simulator and they fail, then we repeat the mission until they get it right. That’s one of the nicest things about the simulator, we can just keep repeating the mission

At this point in the interview, Major Tavernier took us into the room where the simulator was location. It was the size of a very large conference room and dark. We met a young lady, a Department of Defense employee, who operated the computers that controlled and ran the different mission scenarios. It was a large work station with several monitors, and towards the middle of the room sat over 20 servers as stated previously. Walking over to the simulator, I soon found a large hexagon shaped metal fames with video screens attached, and facing a F/A-18 cockpit. The video screen showed us being right there on the flight line of MCAS Miramar, and ready for the next mission.

I would like to thank the United States Marine Corps, the 3rd Marine Air Wing, the MCAS Miramar’s Public Affairs Office, Major Tavernier, and 1st Lt. Murdock for the access and the time given to me for my visit.