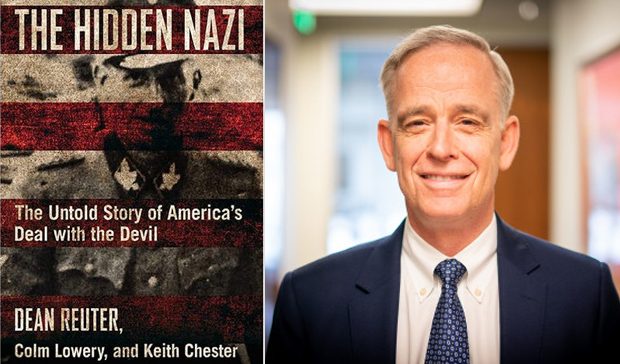 The Hidden Nazi by Dean Reuter, Colm Lowery, and Keith Chester delves into the story about America’s deal with the devil.  It lays out the case that Hans Kammler was truly the worst of the worst, a general in the SS who perpetrated war crimes.

“People described Kammler as Himmler’s most brutal henchman, the worst of the worst.  He was described by other SS men as obstinate, ruthless, and the worst man they knew.  These are from those that were involved in an organized genocide. There is nothing redeeming about his character. He oversaw the V1 and V2 rockets and was in charge of the research and mass production.  He was the person in command from cradle to grave, from the research to the firing on England.”

There was a quote that I put in the book, ““If Adolf Eichmann was the architect of the Holocaust, then General Hans Kammler, was its engineer.” He identified Auschwitz as the source, drafted up plans to double and then redouble it, negotiated with the locals, put in irrigation and waterways, designed the concentration camp barracks, and the gas chambers/ovens. He actually went from one camp to another to study methods of the death camps.”

Who was this little-known Nazi?  Kammler was an assistant to Heinrich Himmler, the leader of the Reichsfuhrer-SS, head of the Gestapo and the Waffen-SS, and Nazi Minister of the Interior. Kammler was in charge of building the concentration camps, perfecting the gas chambers/crematoria, deciding to use slave labor, and supervised underground factories where the V-2 rocket was built, which could have had the capability of reaching the US.

This war criminal appears to have escaped punishment, helped by the Americans, in exchange for the scientists that would assist in defeating the Russians in the Cold War. The book begins with the hypothesis that Kammler did not commit suicide as was reported and probably lived out his life in South America. The authors use past and present documents to prove their assumption, that Kammler cheated justice and death.

Even more interesting is the author’s side note that explains how Wherner von Braun was not the American hero he became.  He was involved in the Nazi program to attack the US with rockets, had used slave laborers, and kept the US in the dark about some of his research.

“We discuss at length in the book how he was Kammler’s underling who delivered him to the US and made sure he did not fall into the hands of the Russians.  Records were ignored, scrubbed, and the hard questions about their involvement in the Nazi regime were not asked.  Von Braun actually withheld documents from the US.  Through our research we found that he hid documents on some technological advances of the rocket team. He never told anyone he withheld them.  I think he kept them hidden as a trade, but became trapped, and if he revealed them, he would look devious.  In essence, he betrayed his saviors by never turning over the documents. He was working on rockets that could reach the US Eastern seaboard and turning them into chemical weapons.  In his initial interrogation when asked why he did not tell anyone about this he said, ‘nobody asked.’”

The authors take readers on a spellbinding, thrilling, and suspenseful hunt in search of this mysterious war criminal.   The Hidden Nazi reads like a crime thriller. People are once again reminded how many Nazis survived the war and escaped justice after they struck a deal with the Devil in exchange for their secrets.