‘The Sound of Distant Thunder’ 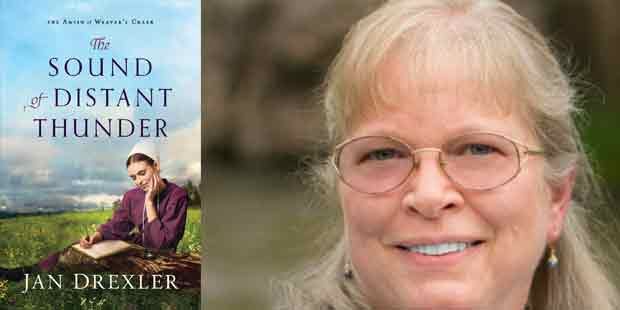 “The Sound of Distant Thunder” by Jan Drexler presents a unique look at Amish society. This first in a series uses the backdrop of the Civil War as the characters struggle to reconcile their convictions and desires with the national interest.

Jan Drexler brings an understanding of Amish traditions and beliefs to her writing. Her ancestors were among the first Amish, Mennonite, and Brethren immigrants to Pennsylvania in the 1700s, and their experiences are the inspiration for her stories. She takes the saying, “write what you know,” to a whole new level.

She commented, “My ancestors were Amish. Also, I lived in Indiana and they were part of the community so I grew up with them. I think my experiences mostly came from the stories my family told. I explored why we were not Amish anymore. I took a journey into my heritage with the stories growing out of that.”

The story explores two divisions, North versus South during America’s Civil War, and the Amish Church, Mennonite versus the Old Order Amish. Through the hero Jonas’ eyes, readers see his struggles with his own principles, beliefs and how these affect his life. Twenty-year-old Jonas is taken in by the romance of soldiering, especially in defense of anti-slavery, even though he knows war is at odds with the teachings of the church. When his married brother’s name comes up on the draft list, he volunteers to take his brother’s place. But this means Jonas must put on hold his commitment to marry his long-time love, Katie Stuckey.

“I wrote the Civil War as more of a background. In specific situations, the characters interact with the Civil War, but are not immersed in it, except for Jonas, who was stubborn, intelligent, stoic, and caring, with a softness of heart. I hoped I showed how men 18 to 22 years of age were looking for an adventure. They really believed it would not last more than three months. I read numerous diary entries from that era where boys told their parents, ‘I have to join up now because I do not want to miss out.’

The Amish would be considered conscientious objectors today. The story has the real-life Ohio Congressman who was able to get passed that the non-resistance religions could hire someone to take their place or pay a fee that would go to the war effort. Survivor’s guilt is emphasized with the book quote, ““If I pay the fee, I’m showing them that my life is more important to me than another man’s.”

Drexler noted, “While doing my research I actually read about a man who did hire someone to take his place. Subsequently that person was killed and the man had a very hard time living with that guilt. They struggled because of their views, since they were non-resistant. As with the Quakers, they thought killing is wrong. But Jonas questions if there is a justification for war during certain circumstances. Most of the “English” world would say they have an equal allegiance to G-d and country, but the Amish feel their allegiance to G-d comes first. People could not conceive that someone would not support their country by fighting. Even during the Revolutionary War the Amish had problems because people thought if they did not want to fight they must be Tories.”

As readers turn the pages they seek answers to the questions, will the relationship survive the separation and how will Jonas be viewed in this pacifist Church? Amish traditions and beliefs are brought to the forefront with the Civil War as a backdrop.