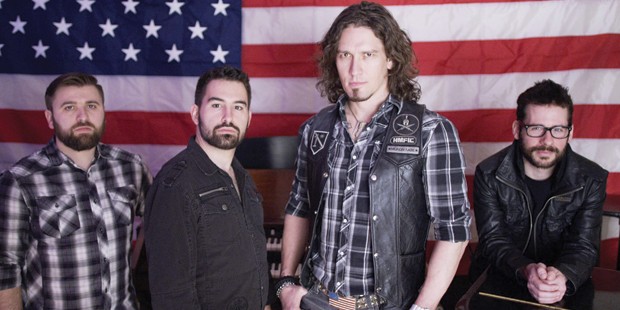 Since the release of Madison Rising’s first album in 2011, the band has worked to create an entirely new genre of music – patriotic rock which combines a classic rock sound with inspirational tributes to men and women in uniform.

The Young Marines program also focuses on patriotism by the youth members’ respect and dedication to all veterans. In addition, it teaches the values of leadership, teamwork and self-discipline, so its youth members can live and promote a healthy, drug-free lifestyle.

Both the Young Marines and Madison Rising will spread the word about honoring and supporting veterans across America. The Young Marines will have a visible presence at Madison Rising shows. Young Marines’ local units will provide color guard and/or lead the Pledge of Allegiance at concerts, assist veterans in need at the shows, and assist the band with merchandise sales and other concert tasks.

The lead singer of Madison Rising is Dave Bray who puts his heart and soul into every performance. A dedicated leader and patriot, Bray was a Recruit Chief Petty Officer in basic training, a Master at Arms in A-school, and was awarded the honor of Top Dog in Field Medical Service School. He served in the U.S. Navy as an 8404 Fleet Marine Force (FMF) Corpsman for the 2nd Battalion / 2nd Marines stationed at Camp Lejeune, North Carolina.

“A few weeks ago, I accompanied 11 Young Marines, their leaders and WWII veterans on a trip to Iwo Jima for the ‘Reunion of Honor’,” Bray said. “I felt as though I looked through a looking glass to our nation’s history. I was honored to be there. To see that black sand, some of the bloodiest sand in the world, was very touching. The veterans who made the trip survived their piece of hell 70 years ago. I’m sure tears were shed. It must have been fulfilling as well as heartbreaking for them.”

Madison Rising’s new album – “American Hero” – is dedicated to the men and women of the armed forces, along with police, firefighters and other first responders whose sacrifice and selfless dedication to the service of America, at home and abroad, help this great nation to remain the land of the free and the home of the brave.

The other members of the band are drummer Sam Fishman, lead guitarist AJ Larsen and bassist Tom DiPietro.

“For me, Madison Rising is truly a call back to service,” Bray said, “and on the Iwo Jima trip I found the Young Marines to be great young people – humble and very engaged. They were helping veterans whenever they could.”

“I have followed Madison Rising since I first heard them,” said Mike Kessler, national executive director and CEO of the Young Marines. “I met Dave Bray in 2012, and I like what they stand for and feel strongly that the youth in this country can benefit from their genre. I am looking forward to working with them and watching as we make a positive impact in promoting patriotism among our communities.”

In addition, the Young Marines will have a presence on CVA’s Defend Freedom tour as well. Each stop features free, family-friendly events and an all-star panel of speakers and musical performers with inspirational stories and a message of freedom.

“We are proud to have the Madison Rising name associated with our organization,” Kessler said. “Dave and his wife Becky will be our guests at our annual Adult Leaders Conference in Las Vegas in May.

About the Young Marines

The Young Marines is a national non-profit 501c(3) youth education and service program for boys and girls, age eight through the completion of high school. The Young Marines promotes the mental, moral and physical development of its members.

Since the Young Marines’ humble beginnings in 1959 with one unit and a handful of boys, the organization has grown to over 300 units with 11,000 youth and 3,000 adult volunteers in 46 states, the District of Columbia, Germany, Japan and affiliates in a host of other countries.

For more information, visit the official website at: http://www.YoungMarines.com.

About Concerned Veterans for America

Concerned Veterans for America (CVA) is a national veterans and military families’ organization that advocates for policies that promote the freedom and prosperity that veterans and their families so proudly fought for and sacrificed to defend. To see a list of tour stops, go to http://defendfreedomtour.com/.