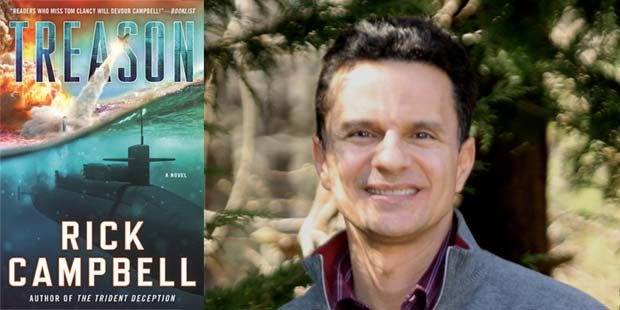 “Treason” by Rick Campbell has plenty of suspense and action in this military thriller. Once again National Security Adviser Christine O’Connor is put in imminent danger and must use her skills, experience and mind to outwit the Russians who are intent on killing her and destroying the U.S.

The plot has some rogue Russian military generals, after initiating a coup against the Russian president, Yuri Kalinin, decide to implement the Zolotov option, rendering American’s B2 bombers and ballistic missiles useless. Without the U.S. to worry about, they swiftly invade the Ukraine. To make matters worse, Christine is trapped in Russia after she had accepted a date of sorts by Kalinin. Now she and he are on the run after escaping those that tried to depose him. The American president has issued orders to send in a SEAL team led by Jake Harrison to rescue both Kalinin and Christine.

As with most military/political thrillers, at times readers must suspend belief. Although for the most part the plot is based on probable reality: the tactics used, the paramilitary armies, the Russian coup, arms reduction and the American response are possibilities that could happen.

This series is different than the others in that a female lead can fend for herself and actually save her male counterparts. Having an overwhelming survival instinct, she has beat lethal odds, including in this story. The other difference is that the Russian president is not a Putin look-alike. Readers can actually sympathize with him, realizing that he is a moderate amongst extremists. He is not the typical Russian antagonist and is full of surprises.

This is a compelling story with compelling characters. The probable scenarios make for a riveting plot.

Elise Cooper: Did you think there were some scenes that tended to not be real-world?

Rick Campbell: Up to now I wanted to make my books completely realistic, but in this book, I made up the submarine. It does not exist in real life. Regarding Christine and Yuri, my thoughts are when it comes to men and women attracted to eachother, people sometimes go beyond what is imaginable. Just look at Helen of Troy where an entire nation went to war over one woman. The Russian coup could happen considering Boris Yeltsin was overthrown, although not by the military but by the KGB.

EC: How would you describe Christine’s actions?

RC: If I was just writing a true national security adviser, I would just have her go to meetings, take notes and make policy. But this would be super boring. I decided to make her like Jack Ryan and get into all sorts of trouble. Since she is vindictive and impulsive; she does not just walk away. There is always the challenge of keeping her as the main character. She is a magnet for danger, but I do try to pick things that would happen to her as realistic as possible.

EC: Do you think we are back to the Cold War with thriller plots?

RC: In 2014 I went to my first Thrillerfest. One author said the Cold War is hot again. It took 15 years after the Berlin Wall fell that people realized Russia is not our friend. Their mindset is that they want to be a superpower and will pursue that at the detriment of others. I wrote books three, four and five in this series because I wanted a military power that the U.S. could go up against, and Russia could still give us a run for our money, along with China. I put the U.S. in a bind and do not make it obvious how they will get out of it.

RC: The next three books are a trilogy of sorts. The relationship between Christine and Jake will come to the forefront, after I take care of the problem that he is married. The next book will be delayed because my son died, and I pushed it back. But I do have the outline, which will involve a military scenario and an operative mission to thwart a terrorist plot. The antagonist is Jake’s best friend who blames him for being dishonorably discharged.