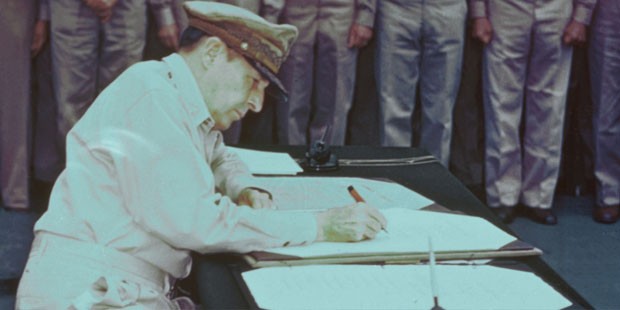 On August 14, 1945, it was announced that Japan had surrendered unconditionally to the Allies, effectively ending World War II. Since then, both August 14 and August 15 have been known as “Victoryover Japan Day,” or simply “V-J Day.” The term has also been used for September 2, 1945, when Japan’s formal surrender took place aboard the U.S.S. Missouri, anchored in Tokyo Bay. Coming several months after the surrender of Nazi Germany, Japan’s capitulation in the Pacific brought six years of hostilities to a final and highly anticipated close.

FROM PEARL HARBOR TO HIROSHIMA AND NAGASAKI
Japan’s devastating surprise aerial attack on the U.S. naval base at Pearl Harbor on Oahu, Hawaii, on December 7, 1941, capped a decade of deteriorating relations between Japan and the United States and led to an immediate U.S. declaration of war the following day. Japan’s ally Germany, led by Adolf Hitler, then declared war on the United States, turning the war raging in Europe into a truly global conflict. Over the next three years, superior technology and productivity allowed the Allies to wage an increasingly one-sided war against Japan in the Pacific, inflicting enormous casualties while suffering relatively few. By 1945, in an attempt to break Japanese resistance before a land invasion became necessary, the Allies were consistently bombarding Japan from air and sea, dropping some 100,000 tons of explosives on more than 60 Japanese cities and towns between March and July 1945 alone.

Did You Know?
Rhode Island is the only state with a holiday dedicated to V-J Day (its official name is Victory Day); it is celebrated on the second Monday in August. V-J Day parades are held in several other locations across the United States, including Seymour, Indiana; Moosup, Connecticut; and Arma, Kansas.

The Potsdam Declaration, issued by Allied leaders on July 26, 1945, called on Japan to surrender; if it did, it was promised a peaceful government according to “the freely expressed will of the Japanese people.” If it did not, it would face “prompt and utter destruction.” The embattled Japanese government in Tokyo refused to surrender, and on August 6 the American B-29 plane Enola Gay dropped an atomic bomb on the city of Hiroshima, killing more than 70,000 people and destroying a 5-square-mile expanse of the city. Three days later, the United States dropped a second atomic bomb on Nagasaki, killing another 40,000. The following day, the Japanese government issued a statement accepting the terms of the Potsdam Declaration. In a radio address in the early afternoon of August 15 (August 14 in the United States), Emperor Hirohito urged his people to accept the surrender, blaming the use of the “new and most cruel bomb” on Hiroshima and Nagasaki for the country’s defeat. “Should we continue to fight,” Hirohito declared, “it would not only result in the ultimate collapse and obliteration of the Japanese nation but would also lead to the total extinction of human civilization.”

REACTION TO JAPANESE SURRENDER
In Washington on August 14, President Harry S. Truman announced news of Japan’s surrender in a press conference at the White House: “This is the day we have been waiting for since Pearl Harbor. This is the day when Fascism finally dies, as we always knew it would.” Jubilant Americans declared August 14 “Victoryover Japan Day,” or “V-J Day.” (May 8, 1945–when the Allies accepted Nazi Germany’s official surrender–had previously been dubbed “Victory in Europe Day,” or “V-E Day.”)

Images from V-J Day celebrations around the United States and the world reflected the overwhelming sense of relief and exhilaration felt by citizens of Allied nations at the end of the long and bloody conflict. In one particularly iconic photo taken by Alfred Eisenstaedt for Life magazine, a uniformed sailor passionately kisses a nurse in the midst of a crowd of people celebrating in New York City’s Times Square. On September 2, Allied supreme commander General Douglas MacArthur, along with the Japanese foreign minister, Mamoru Shigemitsu, and the chief of staff of the Japanese army, Yoshijiro Umezu, signed the official Japanese surrender aboard the U.S. Navy battleship Missouri, effectively ending World War II.

V-J DAY OVER THE YEARS
Many V-J Day celebrations fell out of favor over the years due to concerns about their being offensive to Japan, now one of America’s closest allies, and to Japanese Americans, as well as ambivalent feelings toward the nuclear devastation of Hiroshima and Nagasaki.

In 1995, the 50th anniversary of the end of World War II, the administration of President Bill Clinton referred not to V-J Day but to the “End of the Pacific War” in its official remembrance ceremonies. The controversial decision sparked complaints that Clinton was being overly deferential to Japan and that the euphemism displayed insensitivity to U.S. veterans who as prisoners of war suffered greatly at the hands of Japanese forces.