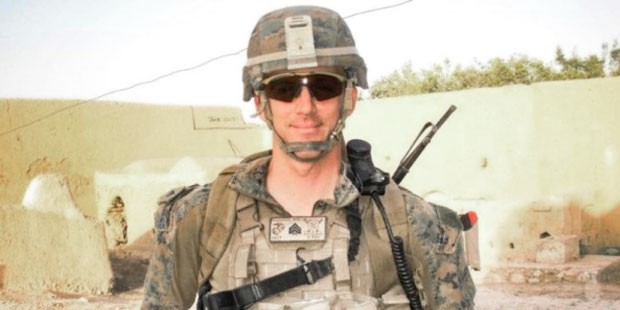 SSgt Dodson was on a combat patrol with 1st Battalion, 7th Marines in Helmand Province when an Improvised Explosive Device (IED) detonated. Brandon was in close proximity to the IED, taking off both legs, fracturing his pelvis and causing other injuries including a broken tailbone and broken right hand. He has been amputated above the left knee and below the right knee. He is just out of surgery and appears to be stable at this moment. Luckily, Brandon is one of the toughest Marines we have ever had the pleasure of serving with and he was seen giving a thumbs-up to his men as he was loaded on the CASEVAC helicopter out.

Brandon served in the 1st Battalion, 4th Marines during the Battle of Najaf, Iraq during August of 2004. He has also deployed with the 11th Marine Expeditionary Unit (SOC) in 2006 and deployed to Husaybah, Iraq in 2007. After his Iraq deployments, Dodson served as a Drill Instructor at MCRD San Diego with India and Mike companies. Following his tour as a Drill Instructor, Brandon was assigned to 1st Battalion, 7th Marines where he is now on his second Afghanistan deployment. He was currently serving as a squad leader for an infantry platoon and was scheduled to return home to his wife, 1 year old son, and family in the near future. Brandon is an extremely close friend who we have fought beside on multiple deployments. For all the Marines he has served alongside, Brandon has always had our backs – it is time for us to have his. The purpose of this page is to provide the family with the funds they will need for transportation, finances, and other expenditures during this time. Please share and donate.