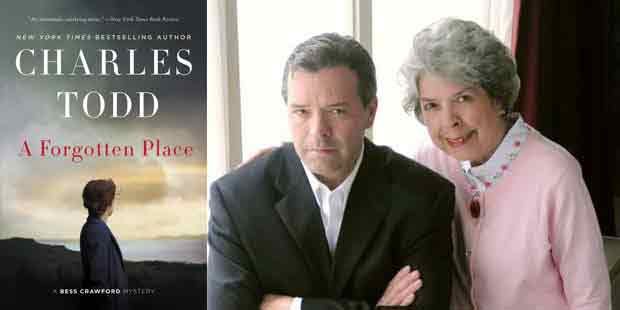 “A Forgotten Place” by Charles Todd is a suspenseful story with engaging characters. Their best books are the ones that flesh out the hero and heroine, allowing readers to get to know more and more of the beloved characters, in this case Bess Crawford. The story delves into the very dark aftermath of WW1 that has left many embittered and broken men.

It is a story about amputees.

“We wrote how German machine gunners took people out from their knees down, basically mowing them down,” the authors said. “They did this knowing an injured solider would take two fit men to take them off the battlefield. A lot of men lost legs as a result of these machine gunners. We wanted to show the psychological burden these men had to go through, because back then many did not have a way to regain their place in society. These men did the physical work of mining and their injuries prevented them from being employed. We wrote this book quote, ‘Their wounds had done what the Germans never could-broken their spirits.’ A prayer of almost every man in the Great War, ‘I don’t mind dying, but please don’t maim me.’”

The plot compassionately relates how the war has ended, but the suffering and agony of the injured has not disappeared. Bess is tending to soldiers who lost limbs and are suicidal. A group of Welsh soldiers, whose serious injuries make their future employment doubtful, feel they have no reason to live. Worried about being a financial drain upon their families, they often commit suicide in an effort to eliminate the problem. Coal miners by profession, they are now unable to perform the grueling, physical labor required. This includes Captain Hugh Williams, someone Bess has built a bond with. After being discharged, he writes Bess a letter detailing the suicides of some soldiers she nursed back to health, and asks for her help in preventing others from taking their life. Able to get a few days leave, Bess seeks out Williams, ending up in a desolate, secretive, and isolated town on the Welsh coast. When bodies wash ashore, it becomes clear, that the villagers have a secret, one that they are willing to kill for. Because she assumes it is her responsibility to investigate she puts her life in danger as the villagers’ hostility towards her increases.

“We incorporated how Bess had to solve the mystery by putting the clues together bit by bit. The townspeople didn’t want strangers to come down and take everything away. They were desperate to keep their secrets. They live their lives by their own set of rules where everyone knows each other’s business. They resent newcomers coming in and spoiling their world. The mystery is centered around “The Worm,” the isolation of the small town, and a shipwreck during the Charles II era that we twisted to make a story.”

The vivid description of the Gower Peninsula in southern Wales creates the right atmosphere for a suspenseful story. Its stormy weather, harsh, unforgiving landscape, and unfriendly citizens adds a level of menace to the mystery.