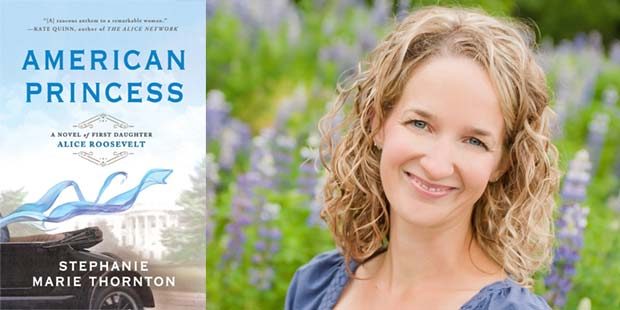 “American Princess” by Stephanie Marie Thornton delves into the larger-than-life America’s darling — first daughter Alice Roosevelt. As the oldest child of Teddy Roosevelt, the press swarmed upon her as they do the royal family today. The book describes how Alice became a rebel having to endure betrayals, scandals and tragedy; yet through it all maintained her wit and composure.

The author found Alice to be, “Bombastic, a larger-than-life figure just like her father.

“Alice was brash, bold, and non-apologetic,” Thornton said. “She never hid her emotions but a Roosevelt family trait was not to talk about their personal grief. TR’s death had to be a pivotal moment in her life; yet, even in her memoirs she did not write about it. The way she coped with all the tragedies was to throw herself into something. People said of all the children she was the most like her father, intellectual and charismatic. She pushed the envelope and broke all kinds of boundaries like her dad. I think she was a woman a little ahead of her time.”

Feeling that she must compete for her father’s attention Alice, “did crazy and wild things publicly to get her dad’s attentions. In my research, I found how Alice, as a two-day old, TR passed her to be raised by her aunt because he was not coping with losing his wife and mother on the same day. Once he remarried, Edith, she insisted that they take Alice back and raise her. Alice and her family never talked about her mother. Possibly because she was a constant walking and breathing reminder to TR of the wife he loved so much and lost.”

Alice was described as unapologetic, unconventional, beautiful, headstrong, fashionable and influential. She was someone who did not take kindly to societal norms as she shot a gun, chewed gum, smoked cigarettes, played poker and participated in car chases. But she also used her celebrity status, becoming savvy at using her political influence. After all, she was a president’s daughter, wife to the speaker of the house, mistress to an influential senator and became a Washington fixture.

Readers feel as if Alice is speaking directly to them as she explains her life of 96 years. Overflowing with political history, scandal, and societal norms, this novel gives insight into the life and times of Alice Roosevelt.