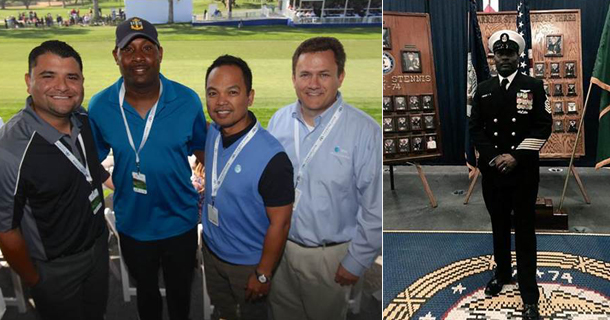 San Diego resident and U.S. Navy Chief Petty Officer Anthony (Tony) Jay Johnson recently won the opportunity of a lifetime ­– a day at the Farmers Insurance Open golf tournament with 19 of his friends and family, hosted by AT&T.

To recognize a service member or veteran who has served or is serving our country, AT&T and Farmers Insurance Open hosted a contest during January, where all current and former members of the United States Armed Forces were encouraged to submit a “patriotic selfie” and/or brief description using #ATTSalutes of why they or someone else who has served or is serving deserved a once-in-a-lifetime day at the 2015 Farmers Insurance Open. Johnson was nominated by a friend and won the contest.

Johnson, a resident of Tierrasanta, recently moved to San Diego with his family to be stationed at Afloat Training Group, where he is responsible for checking on-ship systems and protocols. Johnson joined the Navy after graduating high school over 20 years ago and has been deployed seven times, mostly in the Arabian Gulf.

On Sunday, Feb. 8, Johnson attended the golf tournament with his wife, four children and other military members and retirees that he has befriended throughout his travels. The group was hosted in the Pacific Club, a semi-private venue on the 18th fairway, and treated to all-inclusive hospitality and phenomenal golf viewing valued at $6,000. AT&T executives also attended the event to celebrate with Johnson and thank him for his service.

In November 2013, AT&T announced that it was stepping up its veteran recruiting efforts with the goal of hiring 10,000 veterans and their family members into career opportunities over the next five years, consistent with its commitment to equal employment opportunities. In 2013, AT&T hired nearly five times as many veterans as compared to 2012.