Bellator ready to take piece of MMA market from UFC 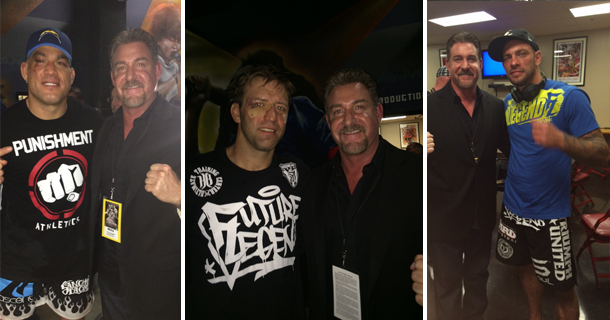 Bellator 131 Tito vs Boner was an amazing fight card that produced an electric atmosphere usually only found at UFC events. New CEO Scott Coker is a promotional genius and has secured media giants such as Viacom and Spike tv to support the Bellator brand. The show was a huge success, was shown on Spike TV and had an average of an astounding 1.8 million viewers nationwide, reaching a peak of 2 million viewers at one point.

Celebrities like comedian George Lopez and wrestling superstar Goldberg among others were in attendance showing that the new Coker reign is going to make a legitimate run at the 85-90% market share that the UFC currently holds.

How is Coker doing this where no other fighting organization could in the past? Well he is creating a family at Bellator from top to bottom. He is giving back to our military and recognizing our veterans who have served our great country. He has also named Royce Gracie the first UFC Champion as a Bellator Ambassador along with former UFC Champion Randy Couture.

This brilliant strategy is a great business move to give back and honor those who put mixed martial arts on the map and took the sport mainstream. The fighters feel the respect and honor given to them and in return are loyal to the new boss. The venue at Valley View Casino was perfect and the sound, lighting and film history about each fighter was excellent for the buildup and anticipation for each bout. Last of all, Coker produced a card with high level and popular fighters that the world wanted to see.

Tito Ortiz vs Stephan Bonner was the main event and did not disappoint. There was bad blood between these two from the start with Ortiz telling me, “In my 19 years of mixed martial arts I have never hated someone as much as I do Bonner. He has attacked me personally, my family and my fans. I had a great deal of pressure to perform and beat this man.”

Tito lived up to the hype and controlled the fight from the start getting several takedowns and landing many efficient strikes. He won by decision but Bonner came to fight and showed the heart that made him a household name after his legendary fight with Forrest Griffin many years back made the UFC popular.

San Diego’s own Michael Chandler, out of Alliance MMA, had a great battle with Will Brooks on the co-main event. Brooks won by referee Jason Herzog stoppage from strikes in the 4th round. At first the crowd thought the stoppage was premature but Chandler stated in the press conference that he was dazed by the numerous blows he endured.

The most exciting fight of the night was Joe “Stitch em Up” Schilling vs Melvin Manhoef both known as incredible Muay Thai kick boxers. This was an absolute war that was almost stopped in the first round as Manhoef took control and delivered a beating with his sharp punches and lethal kicks. Schilling had the heart of a lion by going into survival mode and making it thru the round. In the second round Schilling amazingly turned the tables and ended the fight with devastating strikes to the roar of the crowd. Manhoef was the heavy favorite making the outcome even more dramatic. Look out for Schilling after this amazing, gritty performance and I can’t wait to see this rising stars next bout.

In other bouts, King Mo beat a very tough and game San Diego fighter Joe Vedepo. Vedepo earned the crowds respect by never quiting and took quite a beating before the fight was stopped in the 3rd round. Crowd favorite and Royler Gracie blackbelt Joao Paulo Faria won his Bellator debut vs Ian Butler head and arm triangle choke in the 3rd round to the delight of his 200 plus students and friends in the crowd. Look for big things in the future from this ground phenom who will present a huge challenge for anyone in his path. Another local and San Diego’s own Andy Murad of Undisputed pulled out a great win over a tough Bubba Pugh. “ Nitro”Nick Garcia out of Blackhouse won a great fight against a very tough local warrior Matt Ramirez by guillotine choke in the 2nd round living up to his nickname and expectations.

The entire night of Bellator 131 was so special for our community, local athletes and veterans who were honored. Bellator and Coker are doing all the right things to gain more exposure and fans while giving the fighters and the academies they train in the respect they so much deserve. Look out UFC, there is someone knocking at the door and is demonstrating that there is another legitimate and respected organization that is going to compete for market share in this game previously dominated only by the UFC.