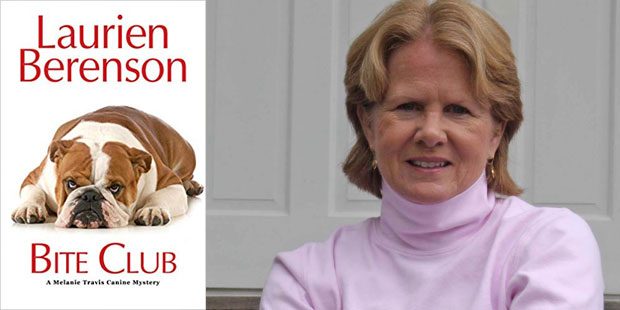 “Bite Club” by Laurien Berenson takes the bite out of crime with this fun, cozy mystery. With a thrilling crime to solve, a likable amateur sleuth, poodles, a bulldog puppy and interesting insider information about the world of dog shows, readers will enjoy her latest novel.

“Some breeders have intricacies, which makes it fun to put them in the cozy mystery,” Berenson said.  “In this book, the mystery hinged on the puppy.  Since there is an element of ridiculous to our real life I want to show that through a thrilling crime, readers can laugh as the characters get into trouble.  Melanie has a great tendency to do just that because she cannot leave well enough alone. I think the dogs are great companions that enable me to show the characters humor, warmth, and humanity.  Someone who loves dogs is a good person. There is humor if you listen to people talking to their dogs and wait for their canine friends to answer. If you go to dog shows you will see so many people who appear to look like their dogs.”

The main character, Melanie Travis, is a dog-lover who welcomes a few friends to participate in a book club she names the “Bite Club.” But her opinionated, bossy Aunt Peg invites herself and several others to join and soon takes over leadership of the club. One of the members, Evan Major, asks Melanie to help train his adorable Bulldog puppy, Bully, since she has six dogs of her own and has also shown dogs. Life imitates the southern mystery the club is reading when Evan is murdered. The hunt for the killer begins with Melanie and Aunt Peg in the fray. Having been the last person seen at his residence Melanie becomes a person of interest.  Determined to clear her name she begins to investigate, discovering that the meek Evan was the computer expert for an investment company that was no more than a Ponzi scheme. The angry investors, some of whom are members of Bite Club, lost almost everything. She and Aunt Peg begin to wonder if one of them have gone looking for revenge. Melanie and her aunt are determined to get to the bottom of what really happened.

“I wrote Melanie in the first book as a single mother with a 4-year-old child whose husband left her,” the author said. “ She was struggling to get by until Aunt Peg approached her for help.  Now she is married with two children.  Melanie was thirty when the series started and now she is forty. Aunt Peg is bossy, opinionated, a competitor, intimidating, a meddler, and very sharp. Aunt Peg is an expert that will never tolerate any foolishness. She is seventy years old and six feet tall.  People thought I based her on someone from the dog show world, Annie Clark. This is not true.  I based her on a friend of mine named Helen.  Aunt Peg is the only character based on a real person.”

What’s there not to like with a book that is a great read highlighting interesting characters, awesome dog show scenes, and a great mystery. The humor sprinkled throughout the story along with the antics of the adorable canines, the children, and Aunt Peg only adds to this enjoyable story.