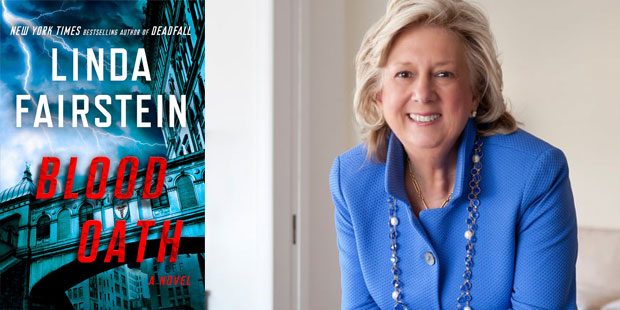 “Blood Oath” by Linda Fairstein has Assistant District Attorney Alexandra Cooper returning to work after taking a hiatus to recover from double personal traumas. She has no time to ease back into a routine because she is presented with a very formidable case.

As the chief of the Special Victims Bureau, Alexandra (Alex) oversees and prosecutes sexual assault, domestic violence, child abuse and related murder cases. After returning to work she is presented with a case by a young woman who has come forward to claim she was assaulted 10 years ago when she was just 14 years old. The name of her attacker comes as a huge surprise to Alex, a respected colleague and someone she knows well. Alex, along with NYPD detectives Mike Chapman and Mercer Wallace must decide if the now 24-year-old victim, Lucy Jenner, is telling the truth.

“As a prosecutor, I never use any of my own cases but do pull stories from real cases.,” Fairstein said. “The villain in this story is based on someone who is real — a man I know personally. I was on the board of a non-profit organization and served alongside this very distinguished gentleman. Three years ago, someone came forward to say he had molested her 20 years ago. The seed for this one came from a tragic story involving a powerful man I knew well, who had done something terrible in his young professional life. I was haunted by the victims’ perspective, and by his downfall. I could not imagine the profound impact of his actions on his victim who said her life was derailed. I couldn’t shake the whole idea of it, so I got to work creating my fictional version of a similar case.”

Besides this devastating accusation Alex must deal with a judge who she has had scrapes with in the past. His separated wife is suing him for a divorce and is accusing him of choking her and being abusive in other ways.

Alexandra also faces a tragedy when her friend, Francie Fain, collapses on the street on the way to Alexandra’s welcome back party. At first it seems a tragic accident, but soon it begins to look more like attempted murder. Alex and her boyfriend Mike Chapman question what led to her friend’s current condition.

History is always weaved into the story whether through a Final Jeopardy question where Alex, Mercer and Chapman generally stop whatever they are doing to watch on TV and make their own wagers regarding the correct answer, or historical architectural and cultural landmarks in New York. The Tombs, the city prison, and the “Bridge of Sighs,” pictured on the book cover, and New York City medical research facility, Rockefeller University, becomes a part of the story.

“In this book, I concentrated on Rockefeller University. At a dinner, I met a very interesting person who is a visionary scientist. He works there. As detective Mike Chapman would say, “It is not a university in the sense we think of it.” It is actually the country’s largest medical institute. I was invited to give a DNA lecture there. After I spoke to the scientists, I was able to take a tour of this 100-year-old campus. It has very unusual dark corners and underground tunnels. Of course, I had to embellish it when I made it a safe house.”

This plot has non-stop action where all three incidents come together in a thrilling and riveting conclusion. It is nice to see a prosecutor and the police work together to bring justice to those who experienced violence.