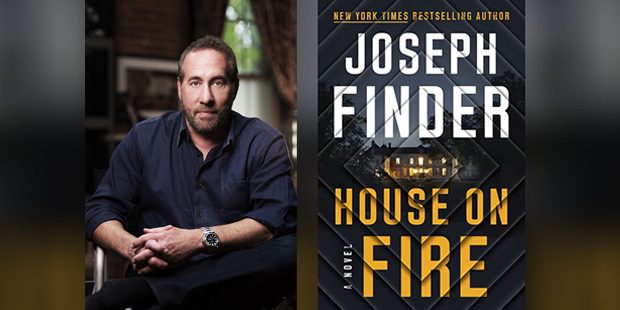 House on Fire by Joseph Finder brings back private investigator Nick Heller. This story of greed and family dynamics follows the relatives who have a vested interest in a pharmaceutical company that manufactures Oxycontin and Oxycodone.  Finder brilliantly explores how these drugs can be addicting, but also shows the other side, those patients that need the pills to cope with their pain.

“I wanted to show how serious a crisis is the Opioid addiction. I did want to show both sides.  It is perfect for veteran Nick Heller.  Because of his military background he would know people who the Opioid crisis has affected.  The problem is that someone who stops taking Opioids and then starts up again can overdose. They will not be used to taking the same amount as they had before. Nick is unsure if Sean died from a suicide or relapsed. I spoke with a couple of Special Forces personnel and those who treat vets to get it right, but also make the story feel real.”

The story opens with Nick receiving devastating news: his old army buddy Sean has died of an overdose. Sean, who once saved Nick’s life, became addicted to opioids after returning home wounded from the Afghanistan war. While at the funeral Nick is approached by one of the daughters, Susan Kimball, who wants him to find a devastating piece of evidence that shows her family’s pharmaceutical company knew the drug was addictive. Posing as her latest boyfriend, he attends a family gathering at the Kimball estate, where Conrad Kimball supposedly has the only copy of the Oxycontin and Oxycodone drug trial that was buried because of its explosive contents. While there, Nick runs into one of his old flames who was hired to find the matriarch’s will. Nothing goes as planned and to make matters worse after someone is killed, Nick realizes that the family members will do anything to protect their dynasty.

This thrilling plot has readers on the edge of their seats as the tension increases with each page. Although all of Finder’s books are captivating the Nick Heller stories seem to be a notch above.