BOOK REVIEW: MANY RIVERS TO CROSS 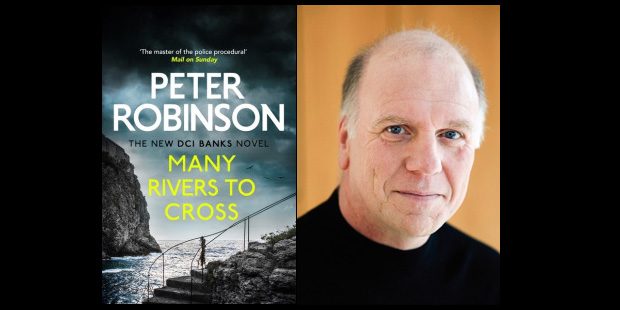 Many Rivers To Cross by Peter Robinson brings back beloved DCI Detective Alan Banks.  Robinson seems to be the master of the “who done it,” while covering subject matters that are relevant.

Robinson noted, “I keep trying to have him in a relationship but he is resisting.  Unfortunately, there is nothing positive at the moment.  Part of his depression is knowing he is getting closer to retirement age and is living all alone.  I think he is more introspective.  He is also depressed because of the kind of job he does, which puts him in contact with some of the most depressing elements of society.  He takes on the trouble that he deals with that drags him down.”

This second book in a trilogy takes over where the first book, Careless Love, left off. Zelda, a super recognizer, is working with law enforcement to identify those in the sex trafficking trade from Eastern Europe. She is a survivor of that world, but still has PTSD. When she sees pictures of men who were involved in her past, she hesitates to share that knowledge, and decides to take matters into her own hands. Zelda is also the girlfriend of DI Annie Cabbot’s much older father Raymond.

“I want the readers to get to know Zelda and become privy to her thoughts.  They know her better than Banks.  She is a conflicted character who had terrible teenage years after being abducted and sex-trafficked. She has PTSD and now wants revenge; yet, strives for a peaceful life.  I think the book quote sums her up, “Because I am a woman? Because I am a foreigner? Because I was forced into prostitution? Because I don’t jump every time you tell me to?” She is trying to find her identity.  I enjoy writing more about a character’s journey than the perils along the way that involve more of the crime.”

A parallel sub-plot is the murder of a young boy found dead in a trash can. No one has come forth to identify the body.  Detective Banks wonders if there is a connection between this killing and the body of a lifelong drug user. Banks is looking for links that others miss, hoping this will give him the break needed to crack the case.

An added bonus is the music used to facilitate Banks’ mood.  Composer Takemitsuh, singers Sinatra, Vaughn, and Bach are part of the story. Readers are always introduced to songs that they can add to their playlist.

“I usually choose the songs as I go along.  I think about what could highlight, contrast, or underline what is going on.  If I can’t do it while writing the scene I will put a question mark and return later.  Sometimes it just so happens I listen to something and realize it belongs here or there.  Banks uses it to help his mood or to help him think.  For example, I used Toru Takemitsu in this book because the sound of his music creates a certain mood with the drifting kind of music.  But he also has an arrangement of certain pop songs that sounds strange in contrast.”

This series is very believable and the sub-plots are fabulously interwoven. Because it is a trilogy there are some loose ends left dangling.  This allows readers to look forward to the next book.