BOOK REVIW: THE LUCKY ONE 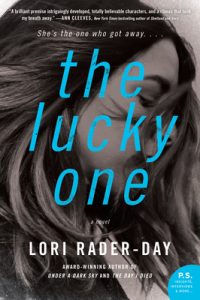 The Lucky One by Lori Rader-Day premise includes a search for justice and finding out answers.

The author explained, “After a new neighbor moved in, I decided I wanted to build a new fence since all the houses in Chicago are on top of one another.  She told me that she is worried someone could reach over the old fence and grab her young daughter.  It never occurred to me that the fence was not a protector for young children.  She told me she was kidnapped as a child.  After thinking about it I asked her if it would be all right to use her as a protagonist for my next book.  I used her story as a jumping off point and then changed it from there.”

The story has a young woman recognizing the man who kidnapped her as a child.  Alice was taken from her backyard in Indiana.  Luckily for her, she was found by her policeman father within twenty-four hours.  In the aftermath of the crime, the family moved to Chicago. Now many years later, Alice volunteers for a website, “The Doe Pages,” that tries to connect unidentified bodies with those declared missing.  While searching, she sees the same man who kidnapped her decades ago.

Kidnapping plays a role in this novel, but also in the author’s life. “My neighbor was kidnapped from a day care center after someone leaned over the fence and took her.  It went unnoticed completely but luckily, she was returned that afternoon.  There was also my own experience. As a child I rode a school bus with someone who went missing.  When I was doing research for this book, going through the “Doe Network,” I saw Debra’s face.  She went missing when she was twelve.  Her sister’s body was found two years later, and she had been shot and raped.  Her step-father was found guilty, but it was after he had died.  Unfortunately, Debra’s body was never found.”

In their search, Alice and her Doe friends come across Merrily Cruz, someone who also is from Indiana.  It seems there is a connection between the kidnapper, Richard Miller, and Merrily’s surrogate father, Rick, who was once her mother’s boyfriend.  He has stayed in touch over the years, through funny texts and letters that are sent from places unknown. Working together they try to uncover what are lies and what is the truth.

Alice and Merrily have different personalities.  “I wrote Alice as hesitant, a shrinking violet, and stuck in her patterns. Merrily is tough and street-wise.  She does not realize she places herself in danger. She says what she thinks and does what she wants.”

This psychological thriller is a story of betrayal.  Readers will hope that those characters who were deeply affected find hope and closure.