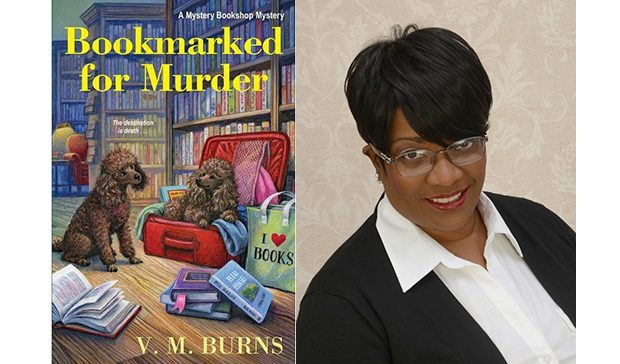 Bookmarked for Murder by V. M. Burns is the fifth book in the Mystery Bookshop series, one of three the author writes.  Many of the amateur sleuths in this series are not young at heart, which adds to the plot.

“I write three series and this one is from the “Mystery Bookshop series.”  It has a story within a story with a contemporary murder and a historical cozy mystery. The protagonist has two poodle dogs, Snickers and Oreo, but they do not play a role in the plot.  BTW: the dogs on the cover are actually my dogs.  I also write a series, “RJ Franklin’s Mysteries” that is set in the fictious town of St. Joseph Indiana, based on my hometown of South Bend Indiana. This combines a police procedural with culinary soul food recipes. The other series is my “Dog Club Mysteries” where the protagonist, Lilly, is a woman whose husband divorced her after twenty-five years of marriage.  In the first book, she is accused of murdering her husband but is subsequently cleared. This series will be the next book that is published in August.  It is titled Paw and Order that has Lilly and the dog club traveling to a dog show.  It is a fundraiser for a rescue organization in Tennessee. Unfortunately, an eccentric millionaire is murdered at the event and Lilly tries to find out who did it.”

The story begins with bookshop owner and historical novelist Sam Washington returning home to North Harbor, Michigan, on a chartered bus. Along for the ride is her grandmother Nana Jo and her gal pals Irma, Dorothy, and Ruby Mae from Shady Acres Retirement Village. Also on the bus is Irma’s current boyfriend Max Franck, a Pulitzer prize-winning author. He is found murdered on the bus during a pit stop, and some wonder if his death has anything to do with his next book that reveals more information on the assassination of Robert Kennedy. Now Sam’s feisty grandmother, and the quirky retirement village friends, Irma, Dorothy, and Ruby Mae, help Sam try to solve the murder.

“My desire was to write a story where a murder takes place within a closed environment, such as a train, plane, or bus.  The suspect pool will be limited.  I got the idea from my personal experience.  Having grown up in South Bend Indiana, around the holidays there were bus shopping trips to the bigger cities like Chicago and Detroit.  All someone has to do is pay about $20 to shop all day and take the bus home.  I thought what if there is a murder that takes place on the bus.”

Both Samantha and her grandmother use their personalities to connect the dots to find the killer. Samantha, is strong, intelligent, curious and gifted with a strong intuition for solving mysteries, while her grandmother is no-nonsense and feisty.

Samantha also uses some skills she has collected as a mystery writer to help her solve the crime.  She is writing an English historical cozy mystery that takes place in the 1930s in the countryside of England providing the reader a story within a story. “At some point I would like to write a whole book with a British cozy mystery.  In this book I thought how WWII is a good time period because it is so intriguing.  To tie them together, I did some research and found out that Joseph Kennedy was Ambassador to the UK around WWII and with the contemporary mystery the person killed was writing a book about the conspiracy surrounding RFK’s death.”

This mystery within a mystery concept is a nice touch. There is a good dose of humor, wit and humility in this book. A welcome addition to the story is the quirky characters that make the novel fun to read.