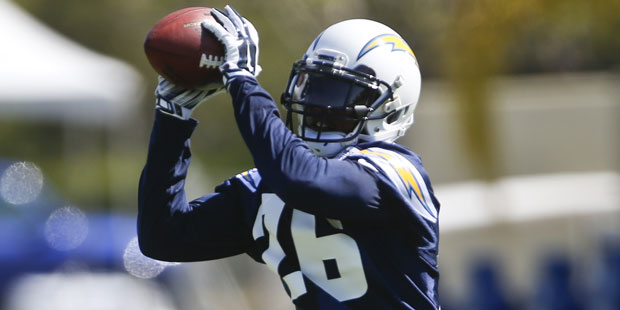 It was no secret the number one priority for the Chargers following the 2013 season was improving the secondary – primarily the cornerback position. And when the Kansas City Chiefs released Pro Bowl cornerback Brandon Flowers on June 13, GM Tom Telesco wasted little time bringing him in and signing him to a contract on June 25. What the Chargers get in Flowers is a six-year veteran who has flourished in the AFC West as a true cover corner having mainly played in a man-coverage defensive scheme for the Chiefs. Entering his seventh season in the NFL, Flowers has started 87-88 games and his career stats include 338 tackles (83 assists); 17 interceptions; three touchdowns; 97 pass defended; four forced fumbles and five fumbles recovered. Prior to their season opener against the Cardinals, Flowers answered a few questions from MP reporter Art Garcia Jr.

AG: Coming off your first-ever Pro Bowl appearance, tell me about this secondary here in San Diego?

BF: We have the personnel to be a special secondary (because) we have playmakers all over the field, but we have to show up and make it work. I think we’ve been gelling in camp and now we just have to put in the work to get better and better every day.

AG: As a veteran of six NFL seasons, what do you bring to this young secondary?

BF: I bring leadership. I bring experience – so I try to help the younger guys with what we are going to be facing this year; what I’ve been through; where we don’t want to go; where we do want to go. It’s just leadership and trying to bring some play-making ability here.

AG: Former Charger Gil Byrd once told me that to be an effective cornerback you have to learn to study film, that there is an art to it rather than just watching game film. How long did it take you to learn how to properly study film?

BF: I was fortunate enough to have a great college coach named Torrian Gray who taught me how to break down film, study route concepts and how offenses are trying to attack you so when I got to the league it really wasn’t hard at all to do it on my own. I was just fortunate to have a college coach who installed it in me when I was young.

AG: So you pass this knowledge on to the rest of the defensive backs?

BF: Definitely, definitely – break down the film, show them what to look for and try to get an extra step on someone in the game.

BF: There’s a lot more mixture over here. We ran nothing but man-to-man in Kansas City – and that was it. We mix it up here – a little zone, a little man here … So it’s a little bit different (but) pretty much what we ran in college for my sake. So it’s not a tough transition at all for me.

AG: You said earlier that you bring leadership to this defense, are you the more vocal type or do you lead by example?

BF: Example, vocal at times. I’m not one of those guys who have to be vocal all the time when I’m out there but when I feel I need to be vocal I am.

AG: Tell me your thoughts on the two young cornerbacks Jason Verrett and Steve Williams?

BF: Oh man, those guys can play. I just want to see them get better and better and become great corners in this league. They have a lot ahead of them and I hope they fulfill everything (they’re capable of) with their God-given talent.

AG: When you guys hear that the secondary is the weak link of the team does it give any added incentive to shut people up?

BF: Oh we don’t really listen to all that, we still haven’t played a down yet so we have a chance to prove everybody wrong Monday night if we go out there and play well. So we just ground with each other and around the locker room and don’t really worry about what is said.

AG: Speaking of Monday Night Football, do you still get that anxiousness about playing in prime time as you enter your seventh year in the NFL?

BF: Definitely, I love this game. It’s a great adrenalin rush because it’s Monday night everybody is watching. Arizona has talent on the offensive side of the ball; we have talent on the defensive side so it’s going to be a great game.

Although they gave up some 304 yards passing to Carson Palmer in their 18-17 loss to Arizona Monday night, there were some positive signs on the defensive side of the ball. Flowers ended the night with 7 tackles (6 solo); Verrett had 4 tackles (3 solo), one pass defended; second-round pick Jerry Attauchu garnered 4 tackles (4 solo), 1 sack, 1 forced fumble, 1 blocked punt; Corey Liuget had 5 tackles (4 solo), 1 sack and Manti Te’o produced 6 tackles (6 solo). The problem is they couldn’t make a stop when they had to. Both Melvin Ingram and Dwight Freeney applied great quarterback pressure during the game both neither of them could close the deal. If the Chargers have any chance of beating the Super Bowl Champion Seattle Seahawks this Sunday, they must capitalize on every opportunity. The key this week is to stop running back Marshawn Lynch, prevent receiver Percy Harvin from converting big plays and force quarterback Russell Wilson to beat you with his arm and not his legs. If the Chargers can eliminate their own mistakes and keep Lynch, Harvin and Wilson in check, they have a good shot at a victory.