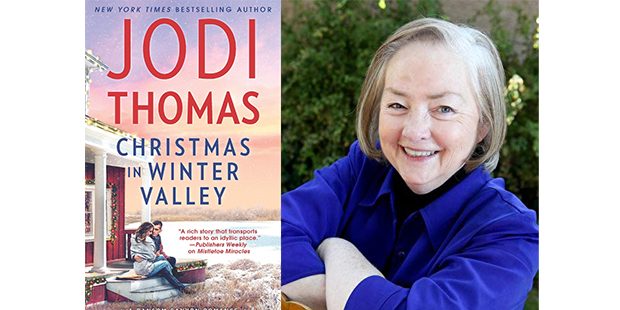 Christmas in Winter Valley by Jodi Thomas has an unusual format.  Instead of having one hero and heroine there are multiple relationships.  Each are connected with the theme involving the importance of family.

The author noted, “Having many relationships, instead of just one, has become very much my style. I like to have an interconnection between the lives of those who live on a ranch as well as a sense of community. I wanted to explore how love develops differently for different ages.”

The series involves three brothers who appear nothing alike on the surface. “I describe Cooper as someone who wants to have fun and make people laugh.  A bit wild, but a really good man.  He is stubborn, independent, and caring. His brother Elliot is the sensible one who is logical and has common sense.  The older brother Garrett is a worrier and the guardian. Each of the brothers are bound by the ranch, the one thing they dearly love.  They consider themselves more of caretakers than owners.”

The story delves into new beginnings, second chances, and finding love when not looking for it.  Cooper Holloway is one of three brothers who own the Maverick Ranch.  As someone who loves animals more than people, he is very content to head out to a rustic cabin in remote Winter Valley, where he’ll care for a herd of wild mustangs. That is, until he spots a nine-year-old boy, Tatum, hiding out.  For him, things go from bad to worse after he falls and must be taken care of by veterinarian Hayley Westland, who ends up stealing his heart.

The other brother Elliot is brooding over his former girlfriend Jessica Brantley when she unexpectedly pops back into his life. As these two reunite they must decide if there is a possibility of a second chance with the relationship.

“I wanted to write this couple that had a long term relationship, which fell apart.  Elliot realized he belonged on the ranch, while Jess wanted the big city. I think neither moved on to someone else because they never stopped loving one another.”

An older couple who was looking for companionship to overcome their loneliness find love instead. Tye Franklin, a former rodeo star, has taken a job as a ranch hand. Just as with many sports figures, he is a rodeo rider who stayed too long in a young man’s game. But after meeting the cook, Danielle Garrett, he becomes very attracted to her.

Thomas describes how the characters take over the story. “As I type with my fingers and they move across the keys it goes from my mind to the story. I love writing about small towns. My next book that is the start of a new series will have a small town that used to be an outlaw town. There is a strong sense of community and people rely on each other for advice, since everyone knows everyone else’s business.”

This finale of the series is both heartwarming, charming, and sad. Each romance is touching and sweet with the added bonus of having nine-year-old Tatum stealing the show. Readers will definitely connect with the characters.