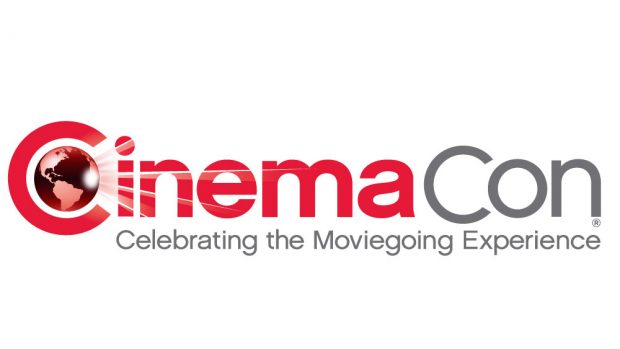 Every year I look forward to a trip with my favorite traveling companion Jenise aka Film Brat to Las Vegas, Nevada for CinemaCon that began Monday, April 1st! We always start the very early drive 5+ hours and make sure to take time to stop at our favorite places along the way, have great conversations, crank up the music and enjoy our little working vacation.

We make our usual pit-stops along the way for gas and snack breaks but this time the stops were to see the majestic snow covered mountains that surrounded us. From San Bernardino to Victorville, I can not remember the last time I saw so much snow. We also stopped to see the masses of butterflies everywhere and the fields that are coated with flowers of every kind and color.

Our usual stop at the World’s Largest Thermometer in Baker, California also coincided with our stop at the place where humans meet aliens. Alien Fresh Jerky surprised us this year as we discovered serious renovations to the general store and the beginnings of what is to be a new alien hotel. I already asked if it was possible to make reservations for next year but alas – no lift off.

Then the long stretch of road that is good for having the window down for fresh air before coming over the slight hill that shows the ever expanding city of Las Vegas in Nevada. Of course it isn’t a surprise to find as the roadside is covered with billboards warning of impending fun times no matter what you might be into.

Our favorite place to check into is The Linq which is right across the street from Cesar’s Palace. That works out ducky since Cesar’s is where we spent our entire week with CinemaCon 2019. Checking into our rooms and a quick freshening up, we head off to the first day of the four days of a mixture of work and fun.

After a few conferences, we are welcomed to a pre-reception welcoming us to CinemaCon 2019 and to get us in the mood for what is to come, NEON premiers a screening of the film WILD ROSE. Afterwards we finally have a chance to say hello to other attendees who we have come to know over the years. It’s a great time to catch up, show off kid and grandkid pictures, and talk about what’s new in theatres and our schedules.

Tuesday morning we hit up a little breakfast time before seating to see what STX Films has to share with us. Jon M. Chu walks on stage to talk about the three movies that brought him to be a part of filmmaking and they are E.T., BATMAN and THE JOY LUCK CLUB. We were thrilled with his choices because, as for me, those three are on my top 20 list without question. His next project is IN THE HEIGHTS working with Lin-Manuel Miranda and will be in theatres in 2020.

Charles Rivkin, Chairman & CEO of the MPAA says, “As technology grows, it always speaks of doom for theaters. Yet, as Edna Mode says, ‘here we are!’ Cinema continues to grow, become more diverse and tell stories people want to see and hear. The audiences take magic seriously.”

Adam Fogelson, Chairman of the MPG introduces what is to come for STX and there are a few things we are personally waiting for. Beginning with a look at BEST OF ENEMIES which is the story of Ann Atwater starring Taraji P. Henson and Sam Rockwell and POMS starring Diane Keaton (who takes the stage of charm us all), Jackie Weaver and Pam Grier is the story of women of a certain age who start their own cheerleading group.

Chadwick Boseman arrives on stage to talk about his upcoming city thriller 21 BRIDGES as New York shuts down the bridges to apprehend criminals. The film also stars JK Simmons and Taylor Kitch who gets a chance to try on his bad boy chops.  Dave Bautista arrives to talk about his comedy MY SPY with Ken Jeong, Chloe Coleman and Kristen Schaal.

If horror is more your style, BRAMS: The Boy II is back and this time Katie Holmes comes along to talk about the next chapter. Holmes says she saw the universal connection of a mother and child. Working with the young actor Christopher Convery was very exciting as well. As for the supernatural aspect, Holmes says, “There were a couple of times during shooting that things happened that gave me moments of a scare”.

THE GENTLEMEN is next on the slate and it starts one of our favorites Charlie Hunnam, Henry Golding, Hugh Grant and Matthew McConaughey. Golding who starred in the hit CRAZY RICH ASIANS says he would do anything they asked to be in the film, “My character is unpredictable, young and hungry and not a character anyone would expect me to play”.

Hunnam says, “I play a guy named Ramundo who is the right hand man to Matthew, who is the biggest weed dealer in the U.K. Most of the time I play the guy who is quite bookish and does the logistics but once in the while I pull out the bone saw.” That being said, please put us down for two tickets immediately!

Colin Firth returns to the screen with his upcoming film THE SECRET GARDEN, Jennifer Lopez also has another film in the hopper with HUSTLERS, the film COUNTDOWN, HORIZON LINE, WORK IT, CRIME AFTER CRIME are waiting to jump into theatres. Gerard Butler returns with GREEN LAND, Vin Diesel is MUSCLE and the Moms’ Moms are back with BAD MOM’S MOMS.

Finally, the one we have personally been waiting for. A few years ago at CinemaCon, STX teased us with the story for a film called UGLY DOLLS. After their presentation, we were handed two of the strangest looking dolls but there was something surprisingly cute about them. Well, after two minutes of looking at it, my then two-year-old granddaughter took the pink ‘Dreamy Bat’ into her arms and they have been friends ever since. Now, the animated film is finally complete and will be in theaters in a few short weeks. It looks to be fun, full of moments and songs we will remember for a very long time.

WARNER BROS. STUDIOS brought their studio presentation hosted by Aisha Tyler, who is the voice of Lana in the animated hit series ARCHER, and she brought the laughs and a few special guests. Starting with animation, Toby Emmerich announces the coming DC PETS, TOM & JERRY, SCOOBY-DOO and SPACE JAM II.

DC brings its offerings of SUICIDE SQUAD II, BATMAN, WONDER WOMAN 84 and the highly anticipated Joaquin Phoenix as the JOKER. Director Todd Phillips says of the film, “What people hear about the film isn’t accurate. If anything, my description of the film would be that it is sad”.

Samuel L. Jackson brings the character of SHAFT back to the big screen, BIRDS OF PREY, and THE SUN IS ALSO A STAR is also in the works. THE GOOD LIAR starring Helen Mirren and Ian McKellan is directed by Bill Condon. SUPER INTELLIGENCE brings one of our favorite funny lady’s Melissa McCarthy to the screen and is directed by husband Ben Falcone.

POKEMON DETECTIVE PIKACHU brings Justice Smith together with the yellow and furry animated Ryan Reynolds as Pikachu together for some fun. BLINDED BY THE LIGHT is a film that believes that trying to find the best of yourself is universal. Ansel Elgort and Aaron Finn star in THE GOLDFINCH DIRECTED BY John Crowley. Elgort says of the book to film, “I hope what ever drew people to the book draws them to the movie.”

DOCTOR SLEEP directed by Mike Flanigan is a sequel to 1980 film THE SHINING. Ewan McGregor stars as the very grown up Danny Torrance who meets a young girl with powers like his own. GODZILLA: King of the Monsters brings Mothra, Rodan and King Ghidorah back to tear up the planet.

Finally, horror is back with a new friend and two repeat offenders as THE CURSE OF LA LLORNA wants your kids, ANNABELLE COMES HOME from writer James Wan and writer/director Gary Dauberman. Our favorite clown is back as the next installment prepares us for IT: Chapter Two with James McAvoy, Jessica Chastain, Bill Hader, Javier Botet and Pennywise himself Bill Skarsgard and all of it put together by director Andy Muschietti.

Now we can not be in Vegas without walking around in the evening to see the big lights and people watching that is what makes this working vacation so much fun. Watching the water fun at Treasure Island, visiting Gordon Ramsay’s restaurant of fish right outside the door of The Linq with Hell’s Kitchen right across the street. If you are looking for even more tasty treats, Guy Fieri has his steak house just waiting to grill to order, Robert Irvine Public House is next to the Tropicana, Nobu, and Searsuckers. Opening only a few days before our arrival is Vanderpump Las Vegas with her own unique style of flowers and class nestled inside Caesar’s Palace next to the Coliseum.

What is in store for Wednesday and Thursday? Read on to our CinemaCon adventures Part Deux!